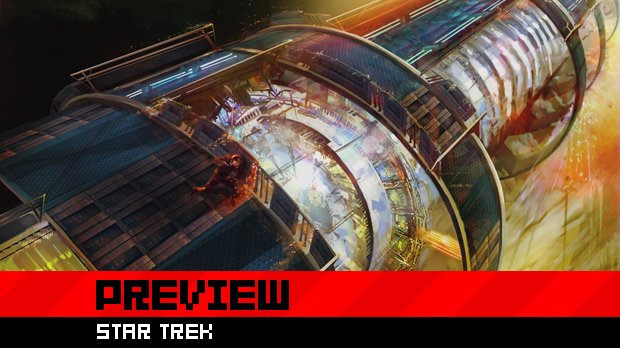 The stigma of bad videogame tie-ins with movie franchises is very hard to overcome. Often rushed to coincide with the corresponding film’s release, movie based games almost always suck. So you’ll have to forgive me for initially ignoring everything related to Digital Extremes’ Star Trek, set to take place between the fantastic 2009 film and upcoming sequel.

Namco Bandai showed off the latest at a recent press event and I honestly have to say I was a little blown away. The game is looking pretty great in the visuals and it actually looks like it could be a fun third-person shooter experience. 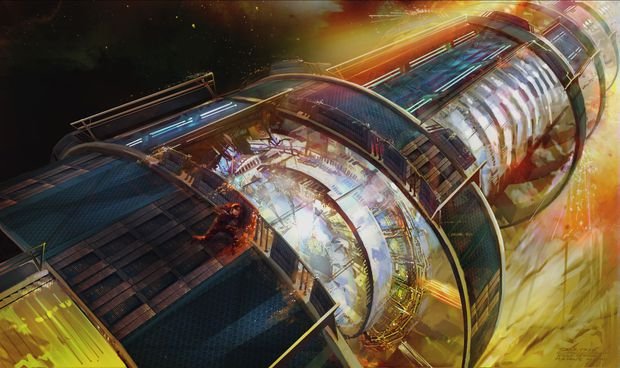 Digital Extremes started work on Star Trek over two years ago with the goal of making a great triple A rated game. The studio has been working hand-in-hand with Paramount Studios whom have literally opened up the Star Trek vaults to them, granting access to every department that worked on the movie to create an authentic Star Trek feel. JJ Abram’s Bad Robot has been close to the development process as well, crafting a unique and original storyline. Last, but certainly not least, Marianne Krawczyk, one of the main writers of the God of War series, rounds out the team behind the project.

Namco began the live gameplay presentation by displaying the asymmetrical co-op experience with two giant projector screen, one displaying Captain Kirk’s perspective and the other Spock’s. A cool thing to note here first was that both screens were displayed in 3D through NVIDIA’s NVision technology simultaneously. We were getting two different perspectives from the campaign in 3D at the same time, and it was looking pretty damn good.

The demo begins with Kirk and Spock returning from an away mission to see the Enterprise ensnared by weird energy tendrils. No one is responding to hails, so the duo dive out of their away ship and hurdle towards the Enterprise in space. This section reminded me a lot of Dead Space 2’s zero-g areas as the pair had to avoid space debris until they made it into the ship.

Once in, the duo discovers strange alien devices attached all around the ship and a deadly toxin that has killed all that it’s infected. Here, Digital Extremes showed off the Tricorder and how it’s been expanded for game as it will convey gameplay objectives and be used as a game mechanic. In this case, Spock used the Tricorder to scan the corpse of a red shirt to discover the toxin.

While this is a co-op experience, Steve Sinclair, Creative Director at Digital Extremes, stressed each character offers a different, yet complementary perspective. Later on, Digital Extremes’ Sheldon Carter compared the exploration as “akin to Metroid Prime” in the ways you can go about the environment with each character.

Next we got to see the difference between Kirk and Spock’s weaponry. The weapons extend beyond just a phaser, and are designed to fit the personality of each character. Kirk’s phaser, for instance, evokes the feeling of a revolver as you switch between kill and stun modes. Spock was utilizing a Vulcan Repeating Cannon, and it’s alternative fire can put enemies in a stasis causing the victim to be clueless as to what just happened to them.

Weapons also have co-op features associated to them. Later we see Kirk holding onto a deflector shield that can be used to attack enemies once Spock fires on the shield to charge it up. Weapons gain experience points as well, so the more you use them the more upgrades are unlocked.

It’s definitely interesting how the developers are taking on the co-op experience here. You can of course play the game by yourself, but that means the AI will be in control of the other character. Digital Extremes told us they’re putting in a lot of effort into the AI, but we’ll see how that turns out in the final product. I hate AI controlled co-op allies, so it’s good to know there will be seamless drop in/drop out co-op, and a splitscreen option as well.

Further into the demo, the pair make their way into the shuttle bay where a cutscene kicks in. The duo are trying to listen to a distress signal, but are cut off when the unknown enemy forces drop in for a surprise attack. The cutscenes were said to be interactive and the player can fire upon the enemy during this scene. Note that the enemies on display here were just placeholders and the big reveal is being saved for E3.

As Kirk takes cover behind some boxes, Spock manages to grab onto an enemy and use his special Mindmeld attack, thus causing the enemy to fight on the their side. It’s at this point that Kirk’s leg gets hit with that toxin, preventing him from walking. Spock now has to carry Kirk to the Medbay, so while Spock is moving it’s up to Kirk to shoot at the enemies along the way.

Once in the Medbay, Kirk is laid out on a table where he has to continue firing at the intruders and the Spock player must use a laser device to exterminate the viruses in Kirk’s leg in a little mini-game of sorts. The heroes then fight a little bit longer before getting captured and taken to the bridge where the enemy forces demand Kirk hand over control of the Enterprise. Kirk starts messing with the control panel, but unbeknownst to the enemy, Kirk actually summons the away ship from the beginning of demo to crash right into the bridge. The impact causes the bridge to break apart, sucking out the bad guys, and potentially our heroes, as the screen fades to black.

We got only a small taste of just how Star Trek is shaping out. During a Q&A segment, questions such as music, controlling the Enterprise ship itself, whether the actors from the film would voice the characters and even if the game would be appearing on the Wii U were asked. Nothing was confirmed nor denied, with Paramount and Digital Extremes stating that there will be some big reveals at E3 later this year.