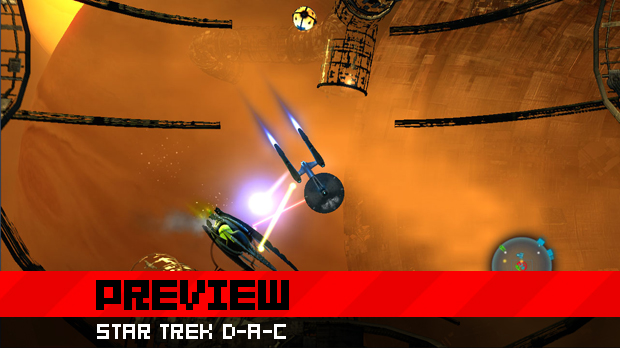 The new Star Trek movie starring Chris Pine and Zachary Quinto (best eyebrows in Hollywood) is set to hit theatres next month. To tie in with the movie, Paramount is releasing Star Trek D-A-C for XBLA, PSN and PC.

D-A-C is about the continued battles between the Federation and Romulan fleets with all the ships inspired by the look of the new film. The focus is solely on multiplayer so there’s no real story to it, but it’s a fun experience.

Set engines to Warp 10 and boldly go beyond the jump to see what Star Trek D-A-C is all about.

is all about the multiplayer. Up to twelve people take to the stars and battle it out with six people on the Federation side and six people on the Romulan side. Each side will have access to three ship classes. The ships are all the same on both sides, they just have different looks to match the respective races:

When firing your main gun, your energy meter starts to deplete. It recharges at a slow rate so you have to be mindful of your meter during a battle. If you shoot your load off too fast, you’ll be in the middle of a fire fight with nothing to shoot. Your health meter also recharges so it would be a wise tactic to use your boosting ability to run away from a battle. At the same time, using boost takes energy from your weapons meter so you’ll really have pay attention to the meter at all times.

Star Trek D-A-C will see players battling it out in three game modes:

The maps are rather huge so it’s a good thing that you have a star map to refer to in order to make your way across the map. Pressing the map button pulls up the entire sector and you can see in real time who is where and where all the base points are. There will be a total of five unique maps, but there’s no real difference to any of them. It’s more for the visuals and all the maps are very nice to look at.

One very nice touch to the game is that you can bring in AI controlled ships. You can play the game by yourself with 11 AI ships or have the AI fill in if you can’t find enough people to play with online. The AI teammates are pretty smart and they’re also pretty brutal when I went against them in my hands-on playthrough.

Overall, the game was a fun experience. My only beef with the game is that there are only three ships to choose from. I like having a wide variety when it comes to these type of games but we may see some DLC down the road that could hopefully add more ship classes. Expect a demo for the game around the time the game is released too.