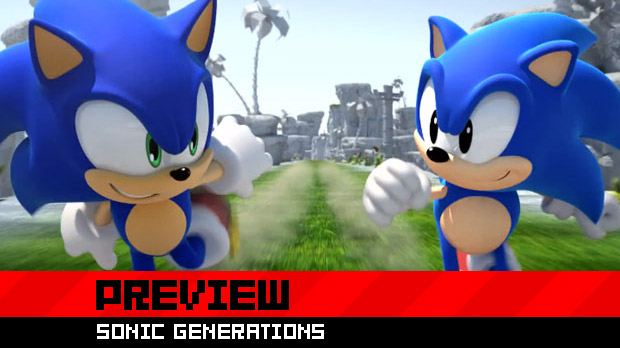 Sonic fanboys are insane and it’s that insanity that’s brought about Sonic Generations. The new game will offer fans the chance to play as old-school and modern-day Sonic in their respective yet very different gameplay styles.

In the demo I went hands-on with, I first started off with classic Sonic in Act 1 of the re-imagined Green Hill Zone.

The classic Sonic levels will stay true to the Sega Genesis formula where speed was a reward rather than a given. The multi-path formula is also intact so the higher you go in the level, the more difficult it becomes and that in turn nets you better rewards.

Really, there’s not much to say about the classic Sonic stuff since it’s very reminiscent of the retro games. The levels will largely be the sidescrolling you expect them to be and, at least based on this one level, Sega has so far done a great job of capturing that retro feeling.

It was neat playing as classic Sonic, but it was in Act 2 as modern Sonic that I actually had a load more fun with. The modern levels are closer to Sonic Unleashed or Sonic Colors with the camera switching from behind Sonic’s back or to the side depending on where you’re at in the level.

The modern Sonic stuff was a lot more action packed and I had to stay on my toes throughout a majority of the course. There are plenty of enemies along the way so you have to react quickly with your attacks such as the slide kick or homing attack. You can also quickly move off to the side by pressing the left or right bumper (on the Xbox 360 controller) to avoid an enemy or obstacle. Sonic’s boosting ability, which makes him go faster for a duration of time, also helps to take out enemies.

The level in modern Sonic offered a lot of variety in the design and before I was able to get used to one particular situation, the environment changed up with new dangers and twists along the route. The consistent shift of the camera perspective was a nice touch too.

The retro Sonic level was a lot more calming whereas the modern level appeased my A.D.D. tastes. Which is why I dug the modern level a lot more. It kept my senses heightened during the entire level and I was never able to settle in like I did with the retro level. To me, the retro take is very calming in a way — it leaves me with a sense of nostalgia.

Either way you cut, fans of old and new will have something they like. The music, while remastered for the modern area, remains true to their original nature too. The only problem with the game as of right now was that there was some pixalated distortion surrounding retro Sonic. The environments were gorgeous, but there’s some very noticeable issues with the lighting and focus around Sonic. I brought this issue up to the Sega rep at the demo event and they told me they are working on the issue.

I asked if any of the other Sonic characters like Tails would make an appearance but Sega was keeping quiet. They wouldn’t outright deny a multiplayer mode, either. I expect we’ll be hearing about new modes in Sonic Generation come E3 next month.