The tactical shooter is a sub-genre that has existed for many years as a more “hardcore” alternative to mainstream first- and third-person shooters. Often marked by squad-based, stealthy combat, and a more deliberate pace than the Halos and Call of Dutys of the world, the tactical shooter offers an ostensibly closer approximation of the nature of real-life military operations.

Zipper Interactive is the home of the SOCOM: U.S. Navy SEALs franchise, one of the longest-running tactical shooter series on the market. The developer is returning to SOCOM after a four-and-a-half-year hiatus — during which it put out the 256-player first-person shooter MAG — with the upcoming SOCOM 4. It’s the first SOCOM game on the PlayStation 3 since 2008’s SOCOM: Confrontation, developed by Slant Six Games. With SOCOM 4, Zipper is looking to restore the good name of its marquee franchise.

I spent about thirty minutes with SOCOM 4 last week in New York City; the game was running in 3D, and I played with the PlayStation Move Sharp Shooter, a $40 submachine-gun-shaped plastic housing for a Move wand and Navigation Controller. Zipper’s Ben Jones, a designer on the game, explained that the studio is looking to modernize the tactical shooter in order to bring it to a wider audience. That doesn’t mean this is a dumbed-down SOCOM game, though. 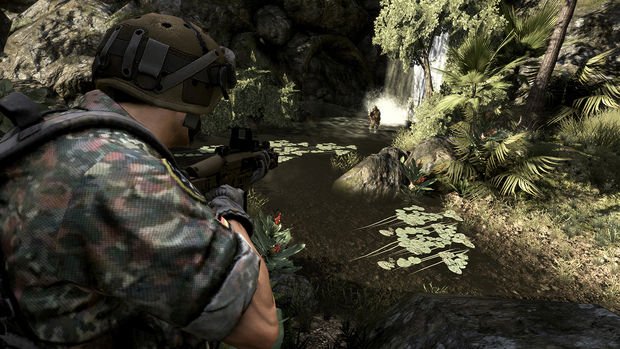 I’ll begin with some notes on the 3D presentation and Sharp Shooter. To my surprise, I enjoyed both aspects of the demo. I’m not a fan of flamboyant, in-your-face 3D — you know, the kind where a game makes excuses to send things literally flying in your face — because most of the time, it quickly induces a headache. Thankfully, the 3D implementation in SOCOM 4 is much more subtle; you, your teammates, and enemies stand out on the screen thanks to an outlining effect, and as you’re wading through thick vegetation, you can see it bending as you brush past it. It’s easy on the eyes, and after a few minutes, I almost forgot that it was there, which is exactly the kind of unobtrusive 3D experience I desire. Most notably, the game looks great in 3D — according to Jones, 3D runs at the same resolution as 2D, and both modes are locked to 30 frames per second.

As a bit of a curmudgeon when it comes to newfangled control schemes, I was initially skeptical of the Sharp Shooter attachment. But Jones asserted that it was the best way to play the game, so I gave it a shot (sorry, I couldn’t resist). It definitely takes some getting used to — for one thing, there’s no dead zone when you have to keep the gun pointed at the screen, lest your character aim at his feet — and having played only for a short while, I can’t attest to whether arm fatigue will arise after long play sessions. Those concerns aside, it’s clear that Zipper has gone all-out in making SOCOM 4 work with the Sharp Shooter, and it’s a completely viable control method. Everything is within reach of your fingertips, except for a few rarely-used options like the switch that controls single-shot/burst/fully automatic fire.

One of the keys to SOCOM 4’s Sharp Shooter compatibility is its variety of turning options. The standard configuration is the bounding-box turning that’s typical of light-gun games: you can aim within an invisible box centered on the screen without turning, but as you approach the edges of the screen, you begin to turn. But with “modal” turning, you can aim at an edge and then tap the L2 button on the Navigation Controller to look in that direction (and hold to keep turning). There’s also a “quick turn” option, which will be particularly useful for advanced players in the game’s multiplayer modes — it essentially functions like mouselook on a computer, offering one-to-one aiming with the Sharp Shooter.

As the opening cinematic to the second mission played, Jones explained that Zipper has put a lot of effort into the story of SOCOM 4. Past games in the series didn’t really have narrative-driven campaigns, but this time around, there’s an impetus for you to play through the missions. Along with the focus on story comes an increased production value to the cutscenes: the camera shifted constantly, which lent something of a cinéma vérité feel to the proceedings — almost as if Zipper meant to evoke war films. 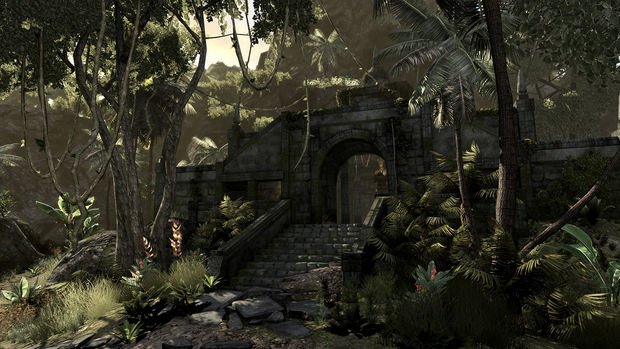 In SOCOM 4, you head up a five-person international task force that has been brought in to quell insurgent uprisings in a unnamed Southeast Asian nation (Jones called it a “Malaysia-like country”). Of course, you get more than you bargained for — the guerrillas are unexpectedly competent, wiping out your headquarters, leaders, and half of your support fleet. You start off the second mission with two teammates, and your objective is to locate the crash site of a Korean ally plane.

The first clearing you come across is crawling with enemies, and immediately, the franchise’s tactical gameplay makes itself apparent. You can go in guns blazing if you want to, but a much more sensible strategy is to use the cover afforded by waist-high foliage around the perimeter of the area, in order to sneak past the insurgents. While the campaign is linear in that you follow a predetermined path, the game constantly tasks you with making decisions as to how you want to proceed down that path.

Using your teammates is one of the chief ways in which Zipper opens up your options. The D-pad on the Navigation Controller offers full control of your squad, which swells to five members once two Korean soldiers — the only survivors of the crash — join you. From here, left on the D-pad controls your initial teammates (the “blue” team, good for close-quarters and mid-range combat with its machine guns and shotguns), and the right button directs the Korean recon squad (the “gold” team, which can utilize its sniper rifles and suppressed weapons to quietly take out targets from afar). 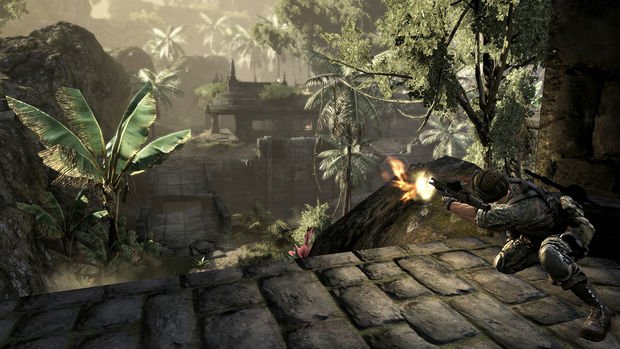 Unlike in previous SOCOM games, which came with headsets, you can’t issue voice commands to your squad. The D-pad squad controls allow you queue up long sequences of instructions — wait here, take out those guys, move up and set that charge, then hold — and the later stages of the campaign require complex directions that voice controls can’t provide. In the name of making the franchise more palatable to newcomers, Zipper has also done away with health packs; instead, SOCOM 4 features the now-standard regenerative health system. In order to recover your health, you can take a breather by taking cover with the circle button, another feature that’s new to the series.

SOCOM 4 strongly encourages you to use your squad, since it’s much tougher (and nigh-impossible later on) to go it alone. “We really want players to feel challenged to the point that they’re compelled to use their teammates,” said Jones. And really, it’s silly not to, since they’re so effective. It’s a lot of fun to give your squadmates a series of directions and then merely sit back and watch them do their thing. Once you get familiar with the commands, it becomes simple to engage in military tactics — you might send your teammates down a road while you go behind some houses to flank any unsuspecting enemies. If your team members fall in a firefight, you can revive them yourself, or just send over the other squad to do the job.

The game’s second mission serves as a squad tutorial, giving you a good amount of assistance in setting up ambushes — set the gold team here; this is where they’ll be the most effective, it tells you. After a few battles, I had familiarized myself with the D-pad controls. You can select a squad, move them anywhere or tell them to wait, paint targets for them to eliminate, and then have them regroup on you (although they’ll eventually do that automatically). As far as I could tell, the squad AI is sharp: your teammates acquit themselves well in battle, and I didn’t see them get stuck on level geometry or anything like that. 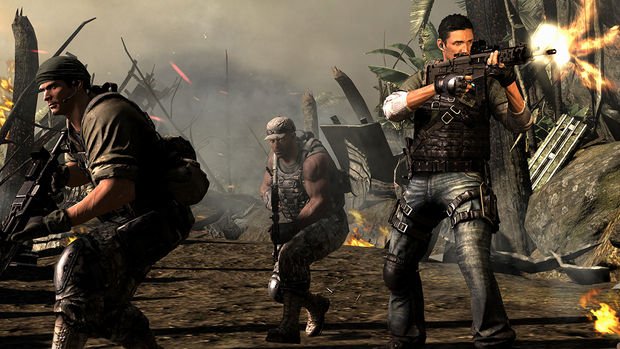 As someone who tried playing the PS2 SOCOM games but found them somewhat difficult to grasp, I appreciate Zipper’s concessions to today’s most popular shooters. It seems like the studio has managed to update SOCOM without stripping it of its trademarks, and I think the game is better off for it. I can’t yet say if I would play through the entire campaign with the Sharp Shooter, but I also can’t deny that the implementation is very well done. You’ll have to try it for yourself this April.