Jason Rohrer and I created a story together.

Sleep is Death is a game in certain senses, and a tool in others. One one hand, the act of playing is fraught with suspense and discovery, forcing a level of quick thinking and quicker reflexes that one normally doesn’t see outside of, say, RTS games.

On the other hand, Sleep is Death is a medium, a set of constraints from which both players can create their own, unique stories. Each of the two participants has exactly thirty seconds to move the story forward in some way. The Player moves his or her avatar around and interacts with things, and the Controller makes sure the world reacts to the Player’s actions through creating new sprites, changing music, or switching scenes altogether.

I previewed Sleep is Death with Jason Rohrer early Monday morning, with him as the Controller and me as the Player. I really didn’t know what to expect. What sort of story would we create?

As it turned out: a comedy. 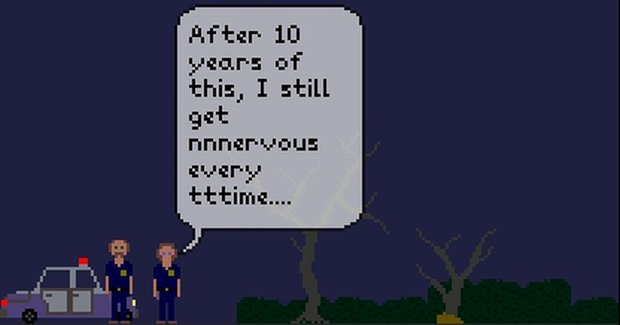 After a few technical hiccups (Rohrer deleted a resource but the game kept looking for it, which caused both of our programs to crash, or something), I connected to Rohrer through the simple process of typing in his IP address.

I was greeted with the image of two policemen, standing by a squad car. “After 10 years of this,” one of them said, “I still get nnnervous every tttime.” I controlled the other cop, a gruff-looking sort with a handlebar mustache. In the upper left-hand corner, a bright red timer ticked down. Rohrer had set the scene. I had thirty seconds to respond.

I really can’t understate the suspense that characterized these opening turns. What did the Controller have planned for me, if anything? What was I about to see? With literally limitless options available to me, how should I proceed? If I wanted to, I could draw my gun and shoot my partner dead right here, right now. Should I act as I assume Rohrer wants me to act, or should I just dick around and try to break the game? Jesus, I’ve only got thirty seconds to act — do something! Do anything!

I grabbed a never-before-mentioned stun gun from the squad car before moving on. I wanted to experience whatever Rohrer had planned, but I didn’t want to be a mindless pawn in his story. Grabbing the taser, I hoped, would introduce an element of chaos into the experience. If Rohrer tried to push me into a situation where I had to shoot someone or run away, maybe I’d just tase them. I wasn’t gonna let Rohrer dictate my actions.

Turns out, I needn’t have worried. A lack of chaos was the absolute last thing our story would suffer from. The thirty-second timer means that you’ve gotta think fast, but it also, invariably, leads to both the Player and the Controller making pretty significant mistakes. But more on that in a bit. 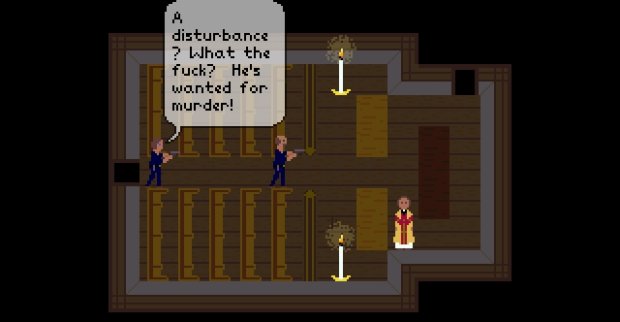 In my earlier news post about Sleep is Death, a few commenters asked how Rohrer’s game was any different from pen-and-paper D&D sessions. The first and most obvious difference, the time constraint, essentially turns Sleep is Death into performance art. It’s not about planning ahead, or achieving a set goal; it’s about being quick, both mentally and physically. I often found myself rushing to move my character and type something clever and use an object with less than ten seconds left on the timer. It’s a game of improvisation: how interesting can you be in thirty seconds? Where can you take the story?

The second difference between Sleep is Death and Dungeons and Dragons is that I didn’t have to look Jason Rohrer in the face as we played. The computer screens that separated us gave the experience both a sense of tangible believability — I didn’t have to feel like a dork pretending that my character is holding a gun, because I can see that he is — and of blessed emotional distance, to some extent. A couple of years ago, I tried to play One Can Have Her with a group of friends and family. The experience was an awkward one. I had to make up stories about particular things happening to our characters while the people I cared about stared at me, trying (and failing) to take it seriously. Our proximity to one another, the immediacy of the situation, made the game embarrassing. We felt like a bunch of schmucks playing make-believe, and not in a fun way.

With Sleep is Death, I felt none of that embarrassment or anxiety. I’m not even remotely comfortable around Jason Rohrer in real life, but I had no problem whatsoever role-playing a tough-talking, wise-cracking police officer so long as we had the game interface separating us. The anonymity of the screen gave me the freedom to let loose. To act without self-restraint. To use a taser on a Catholic priest. Rohrer suggests that the game is actually best when played in-person with someone close to you, but I think it works pretty damn well over the Internet, as well. The experience felt personal, without being awkward.

That said, I began to fall out of love with Sleep is Death after about thirty minutes. The more I played, the less enamored I became with the story Jason and I were creating. After reading about the experiences that Brandon Boyer and Michael Thomsen had with Sleep is Death, I thought I was going to experience a story alternately touching and unusual. Something dark, and sad, and cool, and unclassifiable. The more I played, the more my story felt like a bad episode of NYPD Blue. I got to use my taser late in the game, but even this sadistic aside couldn’t quell my ambivalence.

I was in the moment, trying to keep the altar boy from dying and my partner from going insane, but I kept making dramatic mistakes. I forgot to lock the door to the police cruiser after shoving the priest into it, so he momentarily escaped and engaged in some awkward dialogue with me and my partner (whom I’d spontaneously named Frank). I accidentally hit the “end turn” button a few times when I wanted to drive off, leading to about ninety seconds where literally nothing happened onscreen.

I felt dumb. Like either I’d ruined the story by not being interesting enough, or Jason had ruined it by not giving me enough opportunities to be interesting. Or, maybe, the thirty-second time limit just didn’t lead to interesting drama, after all. My sense of wonder and curiosity slowly diminished, turn-by-turn, as I realized I was never going to get a Thomsen-quality story out of this playthrough.

After we finished playing and had a short chat on the phone, I looked over the story we’d created. After every play-through, Sleep is Death automatically creates a flip book chronicling every single turn of the story from the Player’s point of view. Still trying to assemble my thoughts and calm my nerves after a solid hour of time-constrained improvisation, I read through the story Jason and I had just made.

And it was fucking great.

I hadn’t known it at the time, but we were making a comedy. A comedy where an altar boy gets shot and a priest admits to strangling a dozen people. My little rebellions against Jason’s control, like when I made my character walk away from a Mexican standoff, became surprisingly funny and poignant once I examined them in hindsight. Even the mistakes I’d made no longer felt like mistakes. Not really.

At the time, I regretted not locking the priest in the cop car. If hadn’t made that mistake, however, then I wouldn’t have had the opportunity to use my taser on the priest, which wouldn’t have given Jason the opportunity to make Frank crack wise less than a dozen turns after shooting an altar boy in the face. All the little unexpected complications and fuckups that so tormented me during the act of play became downright profound, in hindsight.

Hell, that moment where I totally, completely fucked up the pacing by hitting “end turn” too early, leaving everyone immobile for about three screens? In hindsight, that became my favorite part of the entire story. What felt awkward and stress-inducing during the actual play session transformed into this weird, Ricky Gervais-esque comic pause in the story. I actually laughed out loud when I re-read the scene.

I don’t necessarily think it’s a flaw that I didn’t enjoy the game while I was playing it quite as much as I did afterward. Had I known we were making a dark comedy while we were creating it, I may very well have behaved differently, and removed some of the magic from the experience. My mistakes weren’t unfortunate digressions from some ideal version of the story; the mistakes, and complications, and weird little quirks and rebellions were the story.

Maybe it’s harder to appreciate the relevance of those moments while you’re trying to suss things out from within the story itself, but that doesn’t make those moments any less meaningful. It doesn’t diminish the odd sense of pride and contentment that I feel when I look at the things Rohrer and I did. It’s not that Sleep is Death is only entertaining in an unintentional, so-bad-it’s-good sort of way. Not at all. Whether knowingly or not, Rohrer played off my own dark sense of humor, and I — even if only subconsciously — off his.

Maybe you’ll flip through the gallery below and find the story boring, or unfunny, and that’s okay. I’m not sure that matters. It is, after all, my story. I helped create it. I helped perform it. It’s tangible, and unique, and mine. No other videogame has offered me so much.

Also, I got to zap a Catholic priest with a stun gun.

That said, I’ve only experienced half of the game. Anyone can have a good time playing a game if they’re playing it with its creator: the true test for Sleep is Death will be whether or not it can effect that same weird, improvisational, surprisingly personal magic without Rohrer’s direct involvement.

Consider this the first half of a preview, then: tomorrow, I will try to learn the Sleep is Death Controller interface. I will try to tell a story to one or two of my friends and family members sometime before SiD‘s slated April 9th release date, and I’ll report my findings here.