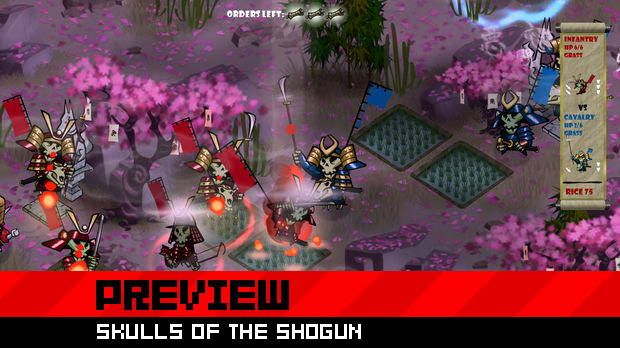 Take a small team of former AAA developers turned independent. Add two parts of tactical turn-based combat. Add one part of arcade action. Now flavor it in a cute style of generals, demons, and undead warriors who can eat the skulls of their enemies to become stronger.

What do you get? Skulls of the Shogun, of course! This upcoming downloadable title is shaping up rather nicely, and if you have a soft spot for games like Advance Wars, there are plenty of reasons to check out why it may be worth your while.

Skulls of the Shogun tells the story of a Japanese warlord in medieval Japan who, after almost realizing his dream of becoming a Shogun, gets stabbed in the back. Literally. When he arrives in the afterlife however, he is royally pissed off at having to wait in line for what seems like an eternity in order to actually enter Samurai paradise.

In a series of humoristic plot developments, the fallen warlord does not stand for this outrage and gathers a small force of disgruntled undead soldiers to claim his rightful position, and to enjoy afterlife as a proper general should.

Any turn-based strategy game needs a good and balanced combat system to work, and from what I’ve played, Skulls of the Shogun does not disappoint. Instead of the grid-like movement you may be used to from similar games, every unit can move however they want within a certain range — indicated by a circle — and do one attack per “order” (action). If at any point during a unit’s order you decide that you’d rather have that unit positioned at another spot, you can just move it around regardless of whether or not it attacked — removing that “Argh, I should have…” feeling you probably have experienced before in this type of game.

Units come in three basic classes: hard-hitting infantry, ranged archers, and fast cavalry. Throughout the game, you’ll also be able to recruit three types of monks for things like healing and elemental attacks. That might sounds like only a few units, but they are actually more than enough thanks to the way combat tactics and strategy play a role in Skulls of the Shogun. 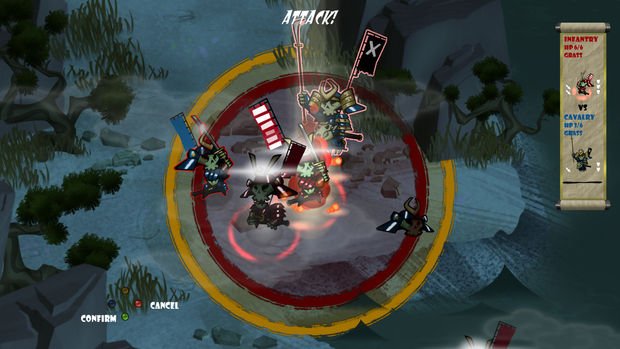 While every unit has its typical Attack and Hit Points indicators, winning a level goes far beyond just sending your troops in and killing your enemies before they kill you. A number of tactical elements come into play that you’ll have to get a hang of. First of all, the basic units have their specific strengths.

Infantry units do standard melee damage, but they also knock opponents back. If there happens to be a chasm or a pond behind them, knocking back your foe instantly kills them. Cavalry units are more mobile for hit and run attacks, but don’t do as much damage nor knock back units as far as Infantry units do. Finally, Archers do a lot of ranged damage, but they are vulnerable to counterattack — especially if they attack other ranged units.

To defend Archers from counterattack, and to block key passages, you can move any group of two or more units next to each other to form a defensive “spirit wall.” No enemy unit can run through units that form a spirit wall, and archers behind one of these can fire without being shot in the skull. Furthermore, the type of terrain itself — grass, bamboo, trees — gives units different bonuses with regards to hit chance.

In order to succeed in a battle, you have to take your units’ strengths, the terrain, and turn-based positioning into account. But that doesn’t mean you can just slowly steam-roll your way to your opponent’s army. 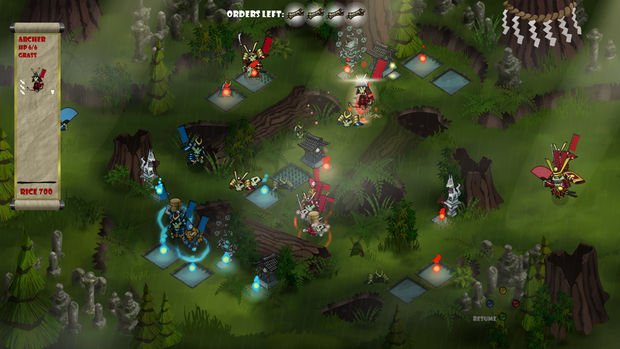 If you think you can act like a slowpoke, think again. Rice paddies and shrines litter the battlefield, which can be “haunted” by a unit. This ends your unit’s order and takes one turn to do, but in return the rice paddies provide you with resources that can be traded in for new units at a shrine. Some specific shrines give you a specialized monk support unit if you haunt them, which may or may not be worth the cost depending on your strategy.

Killing an enemy undead soldier crushes its body, but leaves its skull on the ground. Because it makes perfect sense to do so, your units can eat that skull. Eating a skull adds +2 to its maximum hit points (the default HP for a unit is 6 HP at the time of playing), and eating three skulls turns the unit into a powerful “demon” who can attack two times.

Because you get a limited amount of orders (indicated by scrolls) per turn, and because you usually have more units than you have actions to perform, you have to plan your advance strategically as well as taking the aforementioned tactical elements into account. When you combine all of these elements, Skulls of the Shogun shows a surprising amount of depth without requiring a huge amount of different units to do so. And when you factor in 1 vs. 1 vs. 1 battles, and local and online multiplayer, the range of strategies and tactics should last you quite a while. 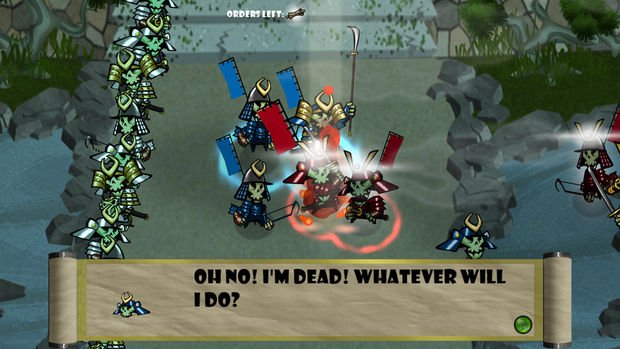 Haunted Temple Studios uses a cartoony art style for the game that is inspired by ’60s Japanese movies, classic anime, and modern urban vinyl characters. Regardless of whether that excites your lower regions or not, it’s very pleasing on the eyes.

With a lengthy campaign, a storyline filled with humor, multiplayer, accessible but deep gameplay mechanics, and an interesting, more action-oriented take on the turn-based strategy genre, Skulls of the Shogun is something you’ll have to keep an eye on. It’s one of those little games that are easy to get into, but make you forget the time until you hear birds chirping outside. Now if only there were undead birds to dispatch of…

Skulls of the Shogun is currently finalizing publisher negotiations and Haunted Temple intends to launch it on a number of digital platforms that will be announced at a later stage. In the meantime, the game’s website has a lot of stuff to hold you over.

Filed under... #Destructoid Originals#Skeletons are awesome