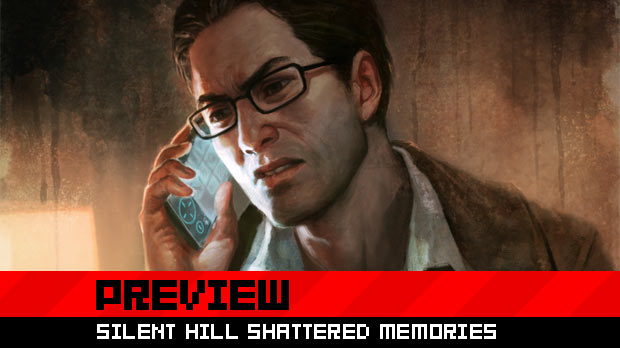 Before the swarm of press could get their hands on all the games at Konami Gamer’s Night, Konami had a presentation showing off some of their bigger game titles coming out later this year. Nothing better than seeing a presentation on games that you won’t get to actually see the same night!

One of the games they walked the crowd through was the much talked about re-imagining of Silent Hill: Shattered Memories. There are a lot of changes coming to the game when compared to the original, and you can check out some of the new ways you’ll be playing through Silent Hill after the jump.

Shattered Memories still sees Harry Mason as he’s trying to find his lost daughter in Silent Hill. One of the big changes to Silent Hill is how “natural” the controls feel on the Wii. If you’re going to open the door, you’ll actually perform that motion by reaching out with the nunchuck to open a door. If you see something of interest in the game, just “look” at it with the Wii Remote. If Harry has something to say about whatever he’s looking at, he will. You won’t have to stop to investigate objects, Harry will say what’s on his mind, and you can still move about the room.

Players move with the nunchuck, and can look around and use the flashlight with the Wii Remote. For the most part, based on the presentation, it really doesn’t look like you’ll need the flashlight. The environments shown were rather bright, even amongst the blackened sky due to the snow storm. Obviously, there will be parts where you can barely see around you, so the flashlight will come in handy.

Another big change for the series is the use of a cell phone. There’s no inventory menu that takes you out of the action, as everything is done through the cell phone in Shattered Memories. Harry will use his right hand to hold up the cell phone, and the flashlight goes into his left hand. You’re free to move around while holding up the cell phone, and you can utilize it for various tasks in the game. 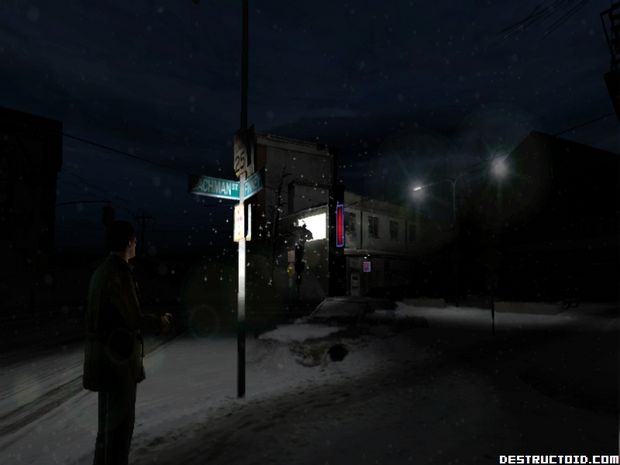 The first and most obvious thing you can do with it is call phone numbers; you can call 911 and any number you come across in the game. You can’t actually get through to 911, but the other numbers will come in handy in telling the story in some way. Another feature of the cell phone is the handy GPS feature; you can pull up your current location and the entire map of Silent Hill on the phone. You can even draw on the map to mark key locations.

The last function we got to see with the cell phone was the camera feature. There will be certain hotspots that you can find thanks to the infamous static noises (which now comes through the Wiimote speaker), but you won’t be able to see what’s at the hotspot with the naked eye. By holding up the camera to the hotspot, you’ll reveal whatever was once there. In the demonstration, Harry took a picture of a swing set, and image revealed a sad little girl. This also triggered Harry to receive a voicemail which was a recording of something the little girl had said when she was at that swing set, trying the two things together.

Next, we got to see some of the puzzle aspects for Shattered Memory, and it was rather odd what they showed off. One of the puzzles involves the player grabbing three soda cans and shaking them. After shaking the third can, they’ll hear a rattling sound indicating something is inside. Players will then turn the can over by flipping the Wiimote over and shake out the key. Another puzzle had Harry using a store’s Closed Circuit TV security system to cycle through cameras in order to unlock a door. Hint: If you want to show off your game’s puzzle system, please try not to use such mundane examples in the future. 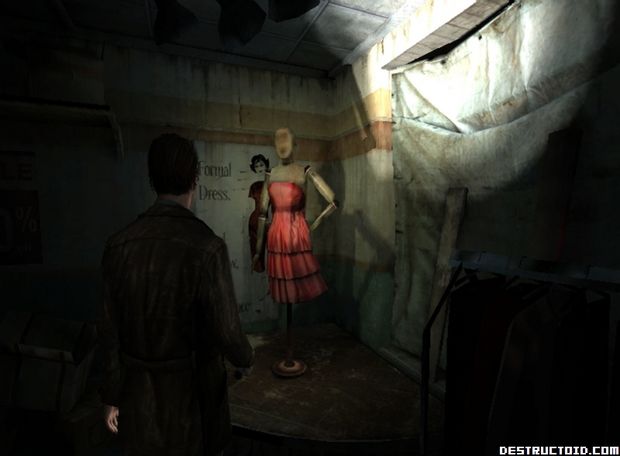 Another letdown from this presentation was the very brief showing of the monsters you’ll be facing in Silent Hill. In one sequence, Harry runs away from a couple of pursuing monsters. Harry makes a run for a building, but the monsters can actually enter buildings too, and keep up the chase. Harry then crawls underneath a table, but one of the monsters grabs his leg. This quick segment ends with Harry kicking off the monster. Seeing as how there seems to be no combat in the game (based on what we saw), it’ll be interesting to see how you’re supposed to face adversity.

Silent Hill: Shattered Memories looked great running on the Wii. Even more impressive is the fact that there’s no loading at all as everything is seamless. Fans will also be happy to hear that Akira Yamaoka is composing the score once again for the game.

There’s just way too many questions that leave me concerned with what’s going on with this retelling of this classic story. Everything was bright, there was no fog and combat — or lack thereof — is still a mystery. Konami needs to get their ass in gear and show us what’s going on here. It’s one thing to make a sequel, it’s a whole other ball game when you try and reimagine a beloved series such as this.

On a final note, there were two points during this presentation where they actually talked smack on Resident Evil when referring to survival horror games. Not directly, but they referenced a couple of things related to the series. Last I checked, Resident Evil started (or least kick-started) the survival horror genre. Poor performance indeed, Konami.