Shank 2 is a lot nastier than I was expecting. That’s the good kind of nasty … the kind that makes you think, “I am so freaking glad I did that move.” Anyone who has an odd attraction to exaggerated cartoon violence should probably keep an eye on this game, because its overemphasized gore had me giggling childishly quite a few times.

For those who aren’t familiar with the original game, Shank 2 stars the blade-wielding brute named … well, Shank, who shoots and stabs his way through a series of well-illustrated environments. With a variety of slick moves, deadly weapons, and the much-welcomed Survival Mode, Shank 2 looks like it could be well worth the download. 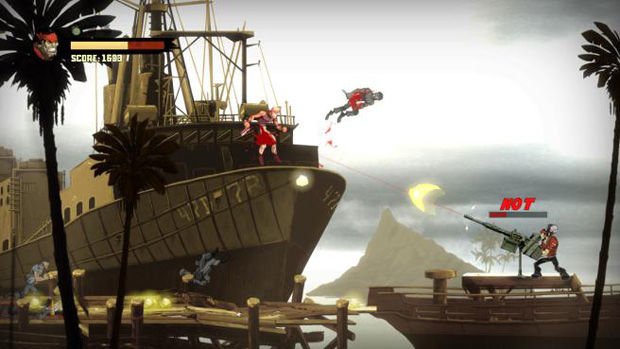 While the world of digital downloads may be fairly crowded with hack ‘n’ slash games of the 2D variety, it’s not difficult to spot the talent and effort that has been put into games like Shank 2.

The first thing I have to point out is that this game looks great. The color scheme lends itself wonderfully to what looks like its Southeast Asia-inspired setting. Enemies pop out from the background well, and even elemental effects like fire and smoke are graphically pleasing.

One thing that really stood out to me was the animation. In this age of 3D realism and motion capture, the idiosyncratic qualities of 2D animation have been lost with the times; even sprite animation, while still used to this day, is seen as somewhat novel. Shank 2 features countless examples of well-done animation fundamentals with exaggerated poses, squashing and stretching, and great secondary and tertiary actions within run cycles and attack animations.

I have an animation degree — however, I’m terrible at 2D animation — so I can better appreciate the skill involved to produce a game that looks like Shank 2. Nonetheless, any gamer that can step outside the perspective of his/her own limitations should be able to admire how fluid this game’s art is. 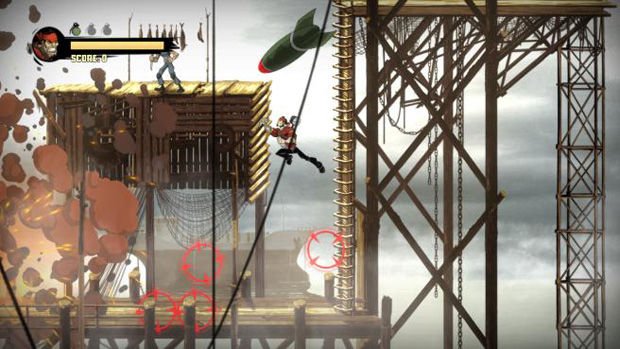 The thrill of the kill

As stated before: Shank 2 is humorously violent. The carnage isn’t presented in a tongue-in-cheek sort of way, but rather with such unapologetic brutality that it ironically gains a bit of class in the process. It’s just humbling to shove a baseball bat into someone’s mouth and then stomp on it … like watching the birth of a baby giraffe.

Every weapon provided in Shank 2 features its own blood-laden counter attack, which influences the desire to try them all. When an enemy swung his machete at me only to have his neck slashed open by Shank’s crude blades, the result was a crimson mess that forced a smirk across my face.

As if that wasn’t gratifying enough, once I got the chainsaw … holy sh*t. Shank proceeded to jam it into attacker’s mouths, and I proceeded to laugh out loud. Am I a messed up person, or is there something to shoving weapons into people’s mouths? It’s like some ultimate insult. Next stop: a nuclear bomb.

I didn’t get to try out every weapon, unfortunately, but Shank 2 presented a variety of savage kills to satiate the sick f*ck inside of me. Certain stages even provided trap doors, which dropped enemies into some sort of grinder apparatus — and then carried the bloody mess through its compilation of cogs and gears. All I could think was, “Yes, I agree with that result.” 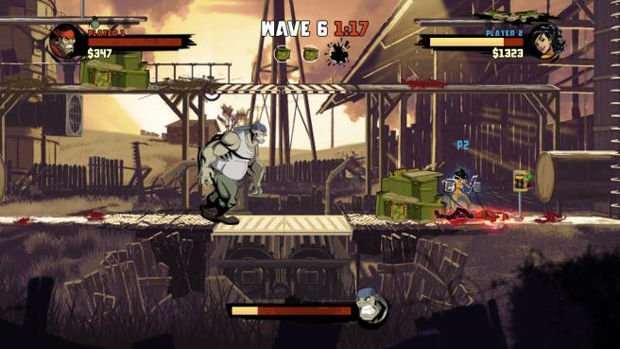 It seems like it’s becoming standard to have a mode in action games where waves of enemies come at you. I usually skip over these modes because they’ve always seemed like filler to me, but Shank 2‘s Survival Mode was actually somewhat enjoyable.

Players start off by choosing a variety of Shank skins, each with its own unique set of attributes and weapons. Those who prefer brute force can choose the Shank skin that’s high in strength, and comes equipped with a sledge hammer and sawed-off shotgun. I’m a gun person, myself, so I chose the model with high ranged skill and dual pistols. This particular skin was also black and had an afro, which I found peculiar. I can sense a great and inappropriate racist joke in here, somewhere.

The gameplay — which can be enjoyed with a friend — consists of timed waves of enemies that attack players, as they move between two different levels of platforms. The catch, though, is that enemy bombers will arrive at times to plant explosives on stockpiles of munitions, which players must protect at all costs.

The combination of fighting for your life and protecting objectives adds a nice degree of tension to the experience; this is especially true when large bosses make appearances. Thankfully, the game provides a currency system for you to buy health, finite specialty weapons, turrets, and even war boars (yes, you read that correctly). Another handy tool is the familiar trap door at the center of the stage. Just be wary of your partner before using it. I fell into the damned thing on more than one occasion. 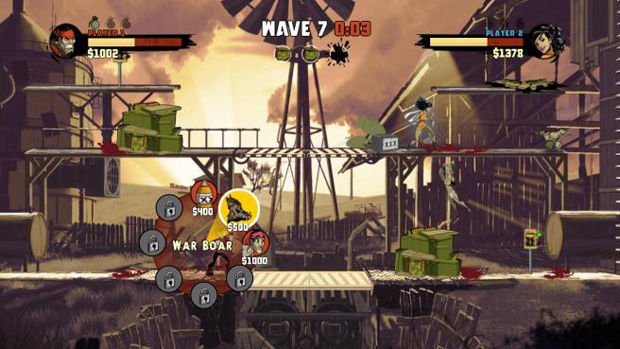 You don’t just turn it off

Shank 2 is shaping up to be a pretty addictive game. Once I witnessed the satisfying effect of a counter attack, I wanted to see more. Unfortunately, my time with the game was limited, so now I must wait for its release like everyone else. Here’s hoping the whole experience is just as fun as the short amount of time I spent playing it.