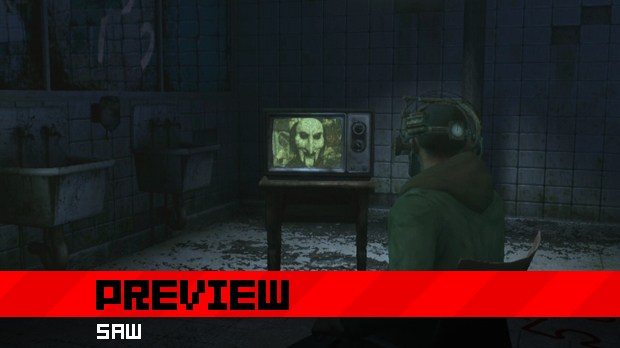 Every October, Hollywood grants moviegoers the chance to see some really old dude set up really crazy elaborate traps, all because he wants people to have a better appreciation for life. I hear motivational speeches work better and involve less blood. Granted, the Saw movies wouldn’t have made over $600 million if it was about a guy talking people into happiness rather than brutally maiming people … into happiness.

Saw begins with Detective David Tapp waking up in a rundown bathroom with that reverse bear trap helmet thing from the movies attached to his head. As the man is trying to figure out what’s going on, the Jigsaw puppet appears on a TV screen in the bathroom and says … something. The Konami event, like most events in San Francisco, was at a nightclub with very loud music playing throughout the night — I couldn’t hear anything anyone said in the game.

As soon as Jigsaw was done talking, the player takes control of David. A rotating joystick symbol appears on the screen, indicating that the player needs to rotate the left joystick in a circular motions to take off the reverse bear trap. There was never anyone around the demo booth that I could talk to about the game, so I kept dying at this part. It wasn’t until later in the night when I returned to the game that I learned from someone else playing that after rotating the joystick so many times, a red light would flash on the reverse bear trap contraption. When the light flashes, you press the X button to move to the next part of the unlocking sequence, which repeats the same pattern for the other side of the trap. Throughout the entire process, the only thing that stays on the screen is the rotating joystick symbol. I would have never known you needed to press the X button when the light flashes had someone not told me.

After finally ripping off the helmet, you’re tasked with getting out of the bathroom. After looking around a bit, I see some painted lines in the bathroom mirror. You need to look at the mirror from an angle in order to get the painted lines to match up, which reveals three numbers. From there, you use the number to open a locked bathroom stall for the next puzzle.

In the stall is a toilet filled with syringe needles. Instead of doing something smart like slowly pulling the needles out one-by-one to see if anything is in the toilet, David just forces his hand into the thing. There’s no sign, no indication at all that the player should even do this. If you saw a toilet filled with needles, is shoving your arm into the toilet the first thing you think of? The toilet also has poop in it which is totally yucky.

The camera switches to a stationary side-angle of the toilet, and you get an X-ray view to see your hand moving around the poopy water and needles. A menu pops up to show how much pain David is experiencing; you need to find a key before the pain meter fills up. From what I could tell, you can’t really move your arm. Rather, the character is just moving his arm to make the contents within the toilet float around. You have to press X once the key gets near your hand to pull it out.

Once you have the key, you can finally leave the bathroom to explore the rest of Jigsaw’s insane asylum. The asylum is huge, and David isn’t the only one trapped there. The player will find other people stuck in traps, and even people out looking for David. They may be looking for David to help them, or maybe Jigsaw told them that the key to their escape is inserted in David’s stomach. Everyone is there against their will and are looking for a way out; you can’t really trust anyone. At one point in the demo, I enter a room just as another guy who was stuck in the asylum entered the same room from another entrance. The door he enters through though is rigged with a shotgun above the door, and he loses his head after barely taking a step into the room.

After a lot of trial and error with another shotgun rigged door that kept getting me, I make my way to another puzzle involving a fuse box. I have to turn some knobs to sync up nine fuses so electricity could run through all the currents. Once electricity is  running, a door opens revealing more the asylum.

I eventually make my way down a hall where a cutscene takes place, and a guy in a pig mask grabbed me from behind. I couldn’t tell if the game was glitching or if this was the “ending” of the demo. Either way, I had enough of Saw, and moved on to the next game at Konami Gamer’s Night.

Saw may involve a lot of trial and error gameplay. As it was, I don’t see this game being much of a challenge. If you screw up, you’ll just be taken back to a point and get to do it all over again until you get it right.

I’m curious to see if there’s any kind of morality feature that will be in the game akin to BioShock’s system, just more fleshed out. That’s the whole thing about the Saw movies — redeeming yourself by helping people that have wronged you in some way in the past. The demo at Konami’s Gamer’s Night only left me with a sense of “here are some really annoying puzzles. Try not to die.”