Don’t know about you, but I have a real soft spot for supernatural tales set during the frontier times in North America. The mixture of exploring a new world mixed with the superstitions and myths of the time is heady stuff. Sang-Froid – A Tale of Werewolves has just that sort of story with gameplay that combines third-person combat and tower-defense-esque strategy.

Greenlit by the Steam Community, Sang-Froid is currently in a closed beta for those who have pre-purchased the game. Despite having some interesting ideas, it’s still quite rough round the edges. 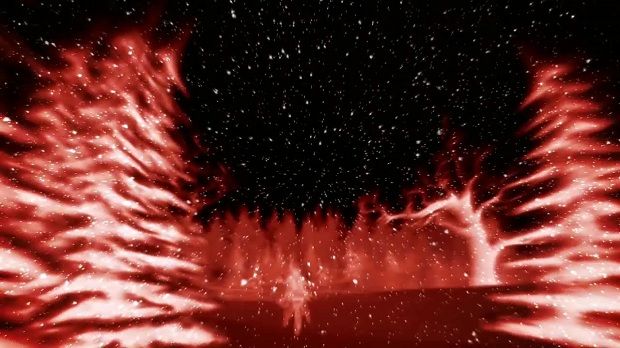 Set during a harsh December in 1852, the story centers around the brothers Joseph and Jacques O’Carroll and their sister Josephine. Josephine has fled the town of Wolvesvale with Jacques after an accident leaves the town church half destroyed and the town in the grips of a supernatural curse. After re-uniting with their estranged brother Joseph, the siblings find their isolated cabin under siege every night from packs of wolves and Josephine falling into a mysterious illness.

Sang-Froid is split into three separate sections: during the day, you can take trips into town to visit the shops to buy items or have one of your weapons blessed by the nuns at the Convent. At twilight, you will enter an overhead view showing the family’s cabin and homestead; this is where you can place traps and identify which enemies will be approaching and in what order. Lastly, at night is where you will be taking control of one of the brothers as you fight off waves of enemies in a third-person action sequence. 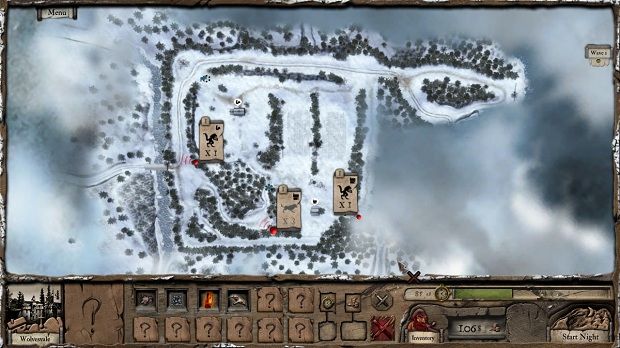 The tactical section of Sang-Froid is where you can lay traps and boost items across the map to improve your chances of killing some of the attacking wolves before they reach the fragile cabin and barn. There’s a good variety of options in how you deal with upcoming enemies: a simple wolf trap will kill a simple wolf and damage a hardier enemy but they’re only really useful placed in a thin path. A hanging net will take out a group on enemies but it requires the player to activate it by shooting it down.

The fun part is that traps can be used in conjunction with another trap; so placing a wolf trap with a hanging net above it will kill a tough werewolf at once. If you place bait underneath a hanging net, you can get a large pack of wolves to pause underneath your trap, making it a cinch to take out the whole group. Placing traps costs action points and money, which are finite; you can’t simply cover the whole map in traps and hope they take out the bulk of the pack. Careful placement and paying attention to where the enemies are heading and what wave they’re in is key.

The strategy mode is pretty well-executed; all the available traps are laid out at the bottom and all are explained in a lot of detail, including what enemies are immune to them and tips for their best use. Another neat feature is that any traps not set off during the night phase will be left on the map for you to re-sell. If you find yourself struggling or even dying in the night phase, you’ll be able to restart from either the beginning of the night or at the start of twilight so you can re-plan and change your setup. 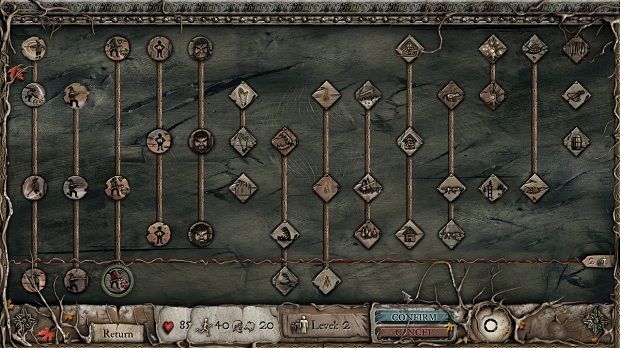 The night phase is where you’ll take control of Jacques or Joseph (you make your choice at the start of the game, each brother offering a different difficulty setting) and fight off the wolves whilst in a third-person view. This part doesn’t feel as polished, however; melee combat consists of using your axe to hack away at enemies in either single strikes or a simple three-hit combo.

The axe initially feels weak although it can be improved either by blessings or buying a more powerful model. The combat still feels lightweight, even after improving your arsenal. Your other weapon is a rifle that lets you take pot shots at enemies but being period-accurate, it takes a while to reload. Rest assured, you’re not going to be headshotting scores of enemies, but there is a tactical element to the combat.

Regular wolves behave similarly to a real wolf pack; they’ll circle you and attack at different angles. A fear gauge indicates how long you have before a wolf will strike; killing a wolf or intimidating them by standing near a bonfire will increase that time. If you stand still out in the open, your enemies will attack a lot quicker so it’s really important to use any time between attacks to let your stamina recharge and to reload your rifle.

After each successful defense of your home, you’ll get the chance to upgrade some of your core skills. The skill tree looks initially unwieldy but it offers some meaningful choices; choosing between a quicker reload or more powerful traps is a hard choice to make. Choosing to spend your hard-earned cash on new weapons or blessed ammo is another tough one. You could spend that money on extra traps if you’re confident in your plans. You’ll usually learn the hard way if your plan works as you can be frequently over-run by rabid wolves without too much warning. 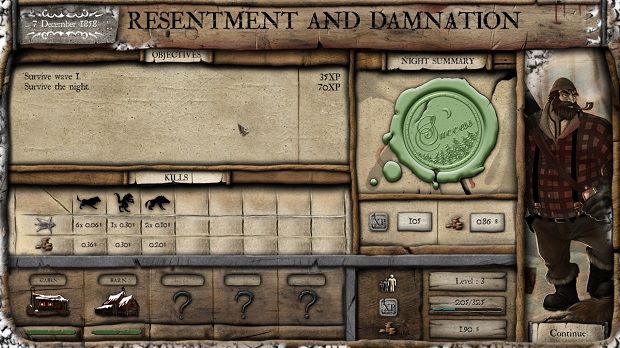 Artiface Studios is a small team, and even though this is a beta version of Sang-Froid, there were some rough edges that stood out; whilst the game has a good range of PC graphics options, there wasn’t one to change the resolution of the game — a big oversight. There were parts where it seemed that dialogue was missing, mainly from the town’s inhabitants in the shops and convent. Their lips were moving but I wasn’t hearing any dialogue.

Speaking with Adam Rotondo at Artiface, he’s assured me that more graphics options will be included in a forthcoming patch. The cutscenes do a good enough job but the 3D models look quite rough and the animations are a bit stiff which is all the more grating as there’s a nicely animated 2D intro movie. Considering the cutscenes are non-interactive, it would have been nice to see this art style carry forward into the game itself.

A compelling blend of different gameplay styles, Sang-Froid – A Tale of Werewolves is an interesting title. It’s well-structured as the challenge unfolds gradually over a period of days and each new mechanic and trap is explained well. Here’s hoping the challenge continues to build and that the strategy element is key to successfully defending yourself through the night — that’s where Sang-Froid‘s strengths lie.