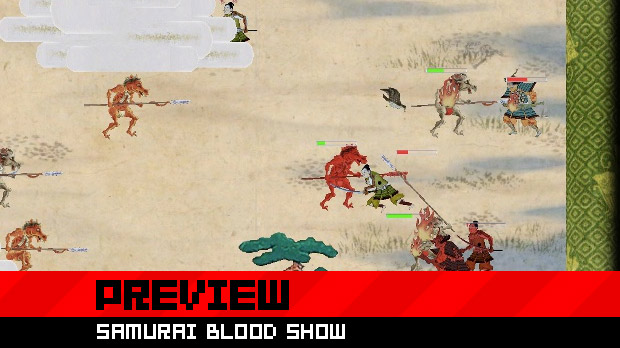 The App Store has developed quite an audience for tower defense style games as of late. So it’s no surprise to see a variety of games use different gimmicks and twists. However, Sega’s recent take on the genre gives it a unique visual style.

Originally released in Japan as Genpei Taisen Emaki, the game has made quite a name for itself on the Japanese iOS marketplace. Because of this, Sega decided that its intuitive tower defense based on feudal-era emaki paintings would be a welcome fit for the western market. 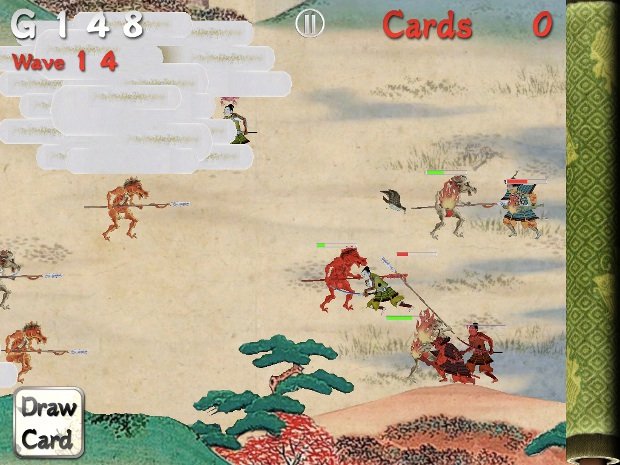 For the most part, the plot is pretty light and it’s only there serve the action of the game. While two royal families are in conflict during the feudal era of Japan, you take the role of a general for one of the family’s armies, and you lead them in the conquest of Japan and to defend your honor. And that’s pretty much it. The game is very faithful in not only its tone, but its overall look. More on that later.

Fans of games like Plants vs. Zombies, or the variety of other flash-based defense games should feel right at home with Samurai Blood Show. You must defend your base from the incoming opposition by placing units in strategic locations and outlast the constant waves of attackers. Defeating your enemies will net you gold, which can be spent on repositioning your infantry, and buying expansion packs for your deck during battle. SBS doesn’t do too much to stray from the formula, which isn’t necessarily a bad thing. That said, this game does have some interesting tricks to make the experience feel even fresher. 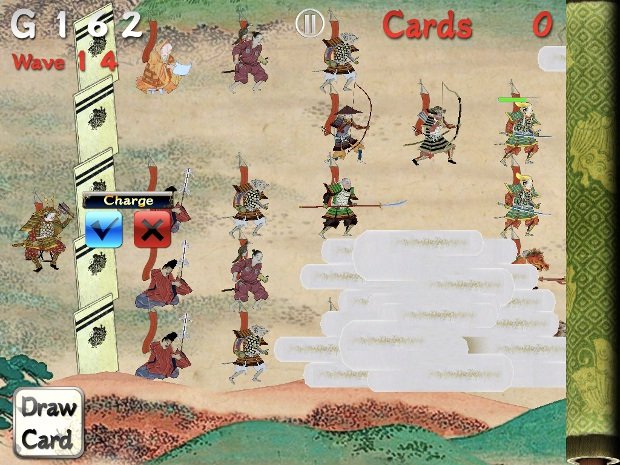 You’ll be able to reposition your infantry during battle at the cost of gold. This not only adds a lot more flexibility to your strategies, but makes the game feel like a more fast-paced version of chess. Especially when you consider the limits and range in which your different units types can move. With about 64 different card types to collect and use, you’ll be able to customize your decks to suit your needs in battle.

Though as great as it is, the touch screen seemed to have some trouble at times registering touch movements. So I had to make those awkward double taps and swipes during battle a few times. It works just fine for the most part, but I’m worried it will come up during the most important parts of a battle. Hopefully, a software update can fix it. 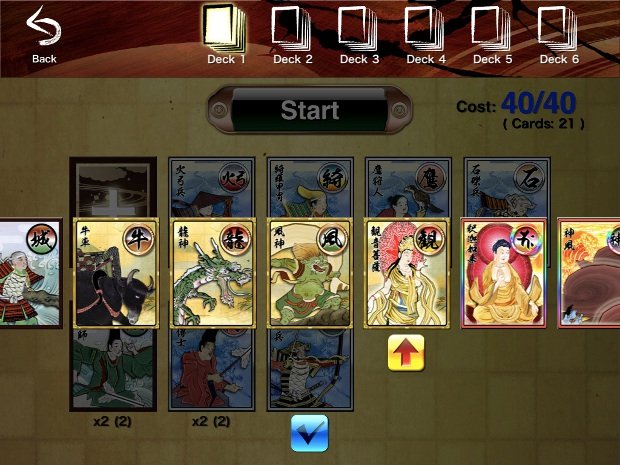 The campaign mode is quite extensive for a tower defense game. Surprisingly so. With approximately 100 different levels — spread across 20 different battlefields with five stages each — the campaign will last quite awhile. Especially when you factor in mission rankings. You’re scored for how well you do during battle and achieving high scores after levels can net you access to rare units to add to your deck.

Visually, the game is quite a looker. Using ancient Japanese art scrolls as inspiration, the look of the classic emaki paintings are accurately replicated and make the game look as if you are watching a painting come to life. It’s the little details that make the emaki art style work so well. When moving the camera across the field, the ‘scroll’ in which game space takes place in will roll in and roll out. Added to that are the characters, different mythical creatures, and scenery that all animate beautifully. I actually got distracted a few times during battle by the great details of the overall presentation. 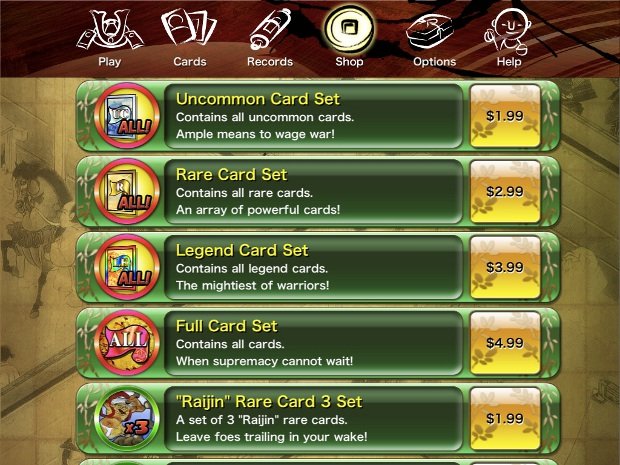 Potentially, the main draw outside of the extensive campaign is the multiplayer mode. Utilizing local bluetooth connections, or online via wi-fi with the iOS game center. You’ll be able to play head to head with other players and even trade your rare cards to complete your collection of feudal warriors.

Eventually, Sega plans to launch an in-game store where you can purchase card packs with real money. Through the store, they expect to introduce new card types and other features for players to get their hands on.

Samurai Blood Show has quite a lot going for it. It’s definitely got meat on its bones when it comes to actual strategy and the sheer amount of content that’s packed in. But if you’re still not convinced, Sega will eventually release a free ‘Lite’ version of the game sometime after the release of the full version. This release will cap the campaign mode at four different stages (20 levels), but the game’s multiplayer mode will still be enabled.

This little iOS game is quite an interesting take on the tower defense genre. It caught me by surprise, and I’m certainly glad that Sega made the decision to localize the game so western markets can experience it. Samurai Blood Show will be on sale for the initial price of $1.99 on all iOS devices starting on September 1, 2011.