I don’t know about you, but I’m starting to get pretty tired of how serious games are these days. Videogames are a portal to do stuff you’d never be able to do in real life, yet most games out there try to capture realistic experiences. Even games that appear like they will be goofy keep adhering to a degree of realism.

Volition seems to share my feelings — from day one of the development of Saints Row: The Third, their goal was to “create the most ridiculous, over-the-top, guilty-pleasure experience ever found in a videogame.” I got a small, hands-off taste of what the next Saints Row game is all about, and it’s easy to see that Volition is making good on that. 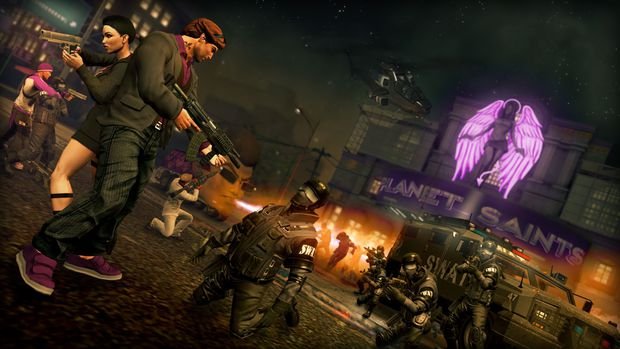 You are the leader of the Saints gang and you can fully customize your character to be whatever you want him or her to be. The Saints are at the top of their game and are celebrities in the city of Steelport. They are a branded image that people love and adore. Citizens clamor to get a Saints autograph, even when the gang is robbing a bank!

[Update: The article initial stated that Johnny Gat was the leader. This was a mistake and has been corrected above.]

The gang’s notoriety gives the player access to powerful weapons right from the start. You’ll of course have at your disposal the traditional assortment of firepower, but why shoot a gun when you can wear giant over-sized boxing gloves called “Apoca-fist” that instantly vaporize anyone you punch? 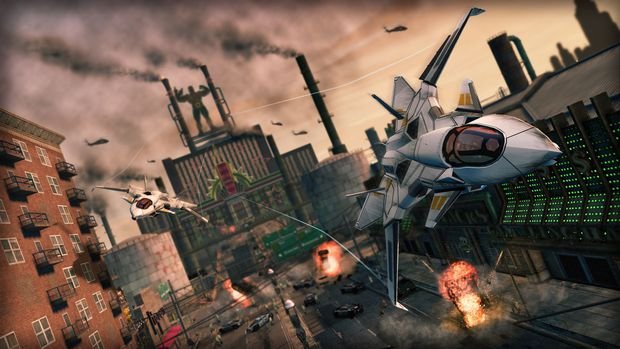 Everything you do will have some sense of style to it, too. For instance, breaking into a car the regular way is replaced by a window-shattering jumping karate kick. Speaking of which, the core mechanic of the driving experience has been completely overhauled. Car handling is a lot more fast, fluid and fun, and leaves you open to doing some insane stunts in the open-world setting.

There are some outlandish cars, too, such as one that features the giant head of Johnny Gat on the hood smoking a cigarette that shoots out flames. Then there’s Professor Genki’s Super Ballistic Manapult, which features a giant cannon on the roof that can suck up people (or even yourself) and then shoot them out.

Flying vehicles will be a big part of the game, as well, and we saw many different types of helicopters. The coolest air vehicle was the Vertical Take-Off and Landing (VTOL) Jet, which can seamlessly switch from hover to jet mode in an instant. It also lets you shoot missiles and laser beams. LASER BEAMS! So cool. 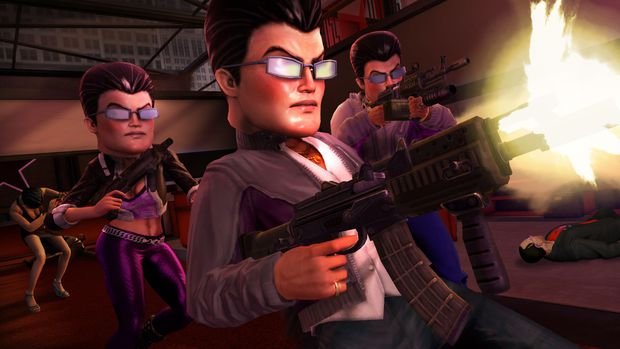 One final feature we were shown before getting into the meat of the game was how you can buy businesses. The Saints are out to take over and spread their territory in the gang, and purchasing a business is one way to do it. The particular business that was bought in this instance was the “Let’s Pretend” costume store, where you can change your outfit and wear whatever you want.

After showing off some of the new tech, Volition started up the first mission of the game, which also acts as a tutorial for the player. The Saints are attempting to rob a bank, which is usually a pretty easy job for them. In this particular instance, though, the bank puts up heavy resistance and fights back. Unbeknownst to them, the bank is owned by the Syndicate, the main antagonist in Saints Row: The Third.

This little setback doesn’t stop the Saints; they start taking out any resistance in their way. Oh, did I mention that all the Saints are wearing disguises, including a giant bobblehead-face-helmet-thing that makes them look like Johnny Gat? Because that totally happened. 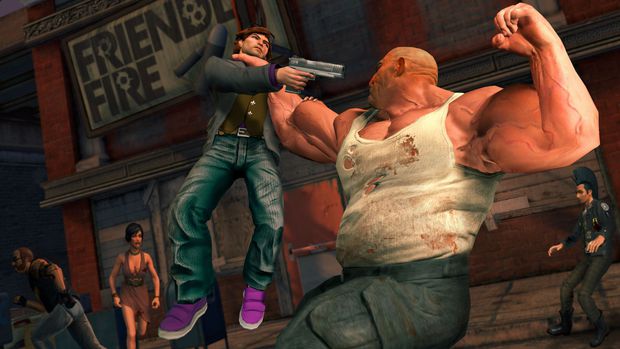 The gang reach the bank’s vault only, to discover they can’t open it. So they go with plan B and blow up the walls surrounding the vault in order to allow easy access for a Saints helicopter to lift the gigantic safe away. That plan turn to shit, though as Josh Birk, a ride-along Method actor set to star in a Saints movie, activates the security alarm by mistake.

A SWAT team quickly arrives on the scene, and the Saints hold off the police until their escape chopper arrives. Once the helicopter shows up, the player hooks up the vault to it and stands on top of the vault as the helicopter attempts to pull it out. They don’t get too far from the bank, as multiple waves of police helicopters and attack copters eventually cause the player to get knocked back into the bank, surrounded by SWAT.

You can expect missions to be pretty ridiculous like this throughout Saints Row: The Third. Volition wanted to create memorable set-pieces for the missions. You can expect lots of side missions, too, both old and new. The one Volition showed off to the press was called “Tank Mayhem” and you have to blow up stuff with a tank until you reach a specific monetary damage goal. Another side mission that was teased is called “Professor Genki’s Super Ethical Reality Climax Show.” Sounds like fun times right there.