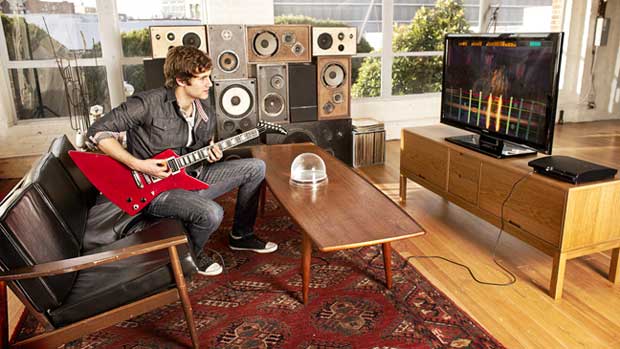 Music games have had their time in the limelight, sadly opting to fade away than burn out. It’s curious then that a big name publisher like Ubisoft would take the time to try their hand at this seemingly dead genre with Rocksmith.

Once you get your hands on the game though, you realize that Rocksmith is something fundamentally different than Rock Band or Guitar Hero. Rocksmith isn’t here to sell you a fantasy, this game is for those with a true passion or at least interest in real guitar. Five button flunkies need not apply.

So how does Rocksmith set itself apart from the pack? It starts with the games peripheral, or rather, lack thereof. Since this is a guitar simulator, Rocksmith works with any guitar that has a jack outlet. There is the traditional game/guitar bundle for those that don’t own a guitar, but if you already have one then the only extra piece you need is the plug that jacks from the guitar to your PlayStation 3 or Xbox 360.

Once you get into the game you notice one of Rocksmith’s cooler features — the scaling difficulty. Unlike music games of the past where you select a difficulty from easy to expert, Rocksmith tracks all of your improvement (or decline) in skill and throws more or less notes at you to compensate. Your aptitude is measured across all songs and note frequency will even change dynamically mid-song. Since I’m, ahem, musically challenged, I found myself strumming notes once about every five seconds, with the pace quickening every time I hit three of four notes in a row. When the notes started coming a little too fast and I missed multiple notes in a row, they scaled back accordingly.

For the newcomers still not assured that the scaling difficulty is going to be enough to help, there are other tools available for improvement. Rocksmith does have its training and practice modes (with a sultry-voiced announcer to walk you through), but it also packs mini-arcade games that challenge different aspects of guitar play.

The mode I played was a strumming challenge that played as an odd mesh of Space Invaders and Duck Hunt. In this challenge, you have to shoot down ducks that fly farther up their lane by strumming the corresponding notes and strings. It’s all very silly and has a feel reminiscent of the Jumpstart edutainment series but after a few rounds of that, in conjunction with the training modes, I really felt like I was starting to get a hang of the mechanics revolving real guitar play. There are currently nine of these arcade games planned to ship with Rocksmith with the harder ones unlocked as you progress through the previous ones. There are also leaderboards to keep track of your high scores across all nine games.

The track list is no slouch either. Focusing on guitar-heavy tracks, Rocksmith features contemporary music from bands like The Black Keys as well as classic standbys like the Rolling Stones. The final track list comes out to about fifty and all of them can be played with a mic as well. We didn’t get a chance to see how the karaoke elements pan out and if it will be as much of a simulator as the guitar elements.