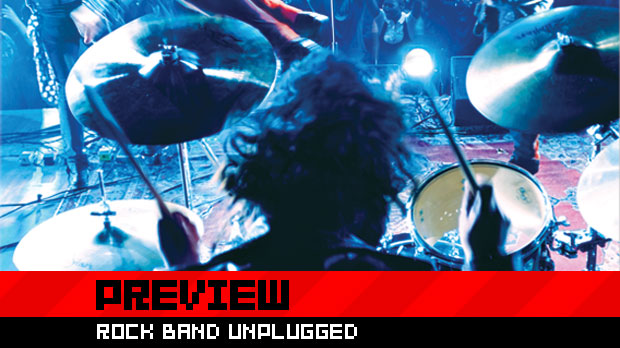 Back when Harmonix revealed the first Rock Band, we had a chance to go to its offices to check it out a few months before it was released. It looked great — the guitar formula that they had perfected, married with drums and vocals? Sign us up.

But we had to ask while we were there — when the hell are we going to get a new Amplitude? Of course, they weren’t really ready to give specifics, but it seemed like a project they’d like to pursue again in the future. Rock Band Unplugged, the upcoming PlayStation Portable exclusive, looks like the closest we’re going to get to a new Amplitude for now. That’s not a bad thing.

We recently went hands on with a near-final build of Rock Band Unplugged at MTV Games’ New York City office. Hit the jump for full details, impressions, and a partial track listing (including some songs exclusive to the portable game for a “limited time”).

If you’re already familiar with Harmonix’s PlayStation 2 titles Amplitude and Frequency, then you’re mostly prepared to enter the one-man band world of Rock Band Unplugged. Like those titles, Rock Band Unplugged puts you in control of multiple instruments at once (guitar, bass, vocals, drums in this case), using a combination of the D-pad and the PSP’s face and shoulder buttons.

The game is also similar in that the songs are played around looped phrases, with individual instrument tracks being triggered by nailing a sequence of colored gems as they sail down the note highway. Once a particular phrase is hit, that track will loop, and an icon prompts you to move to a different note highway, which is tied to another instrument. Harmonix is calling this “plate-spinning gameplay,” as you’ll be rotating between tracks to keep the music going, building up the song as you “play” numerous tracks.

While the note chart may look similar to the console game at first glance, that’s not quite the case. Developer Backbone was tasked with re-charting the gems for the PSP to work with the different control scheme of the handheld. For instance, the drum chart still makes sense rhythmically (the game can be boiled down to basic beat-matching), but the line indicating a kick pedal hit has been removed. Vocals are obviously not sung, either — you’d look like an idiot singing into the microphone-less PSP — but the gems are charted to go along with the lyric phrasing.

Just because you’ve mastered Judas Priest’s “Painkiller” on every instrument in the console versions of Rock Band, don’t expect that to translate over seamlessly to Rock Band Unplugged. Outside of the notes being charted in a different way, playing on the PSP is totally different than using a guitar peripheral or drum kit. The dreaded “fifth fret,” the orange button, has been dropped for Rock Band Unplugged. Four remain — red, orange, green, and blue (in that order from left to right) — and by default are mapped to left, up, triangle, and circle respectively. (We’re told controls can be re-mapped in any configuration.) Once built up, “Overdrive” is triggered with the X or down buttons, and acts to increase score multipliers or pull you out of a song failure.

Even if you’ve mastered Amplitude and Frequency, there’s still a bit of a learning curve here on the PSP. It took a few tries to get comfortable with the configuration; even hopping into a song on Medium difficulty was a bit of a shock. But once muscle memory kicked in, sight-reading the note charts and translating that to fingers became easier. It’s also outstandingly fun, despite the lack of plastic instruments. Rock Band Unplugged most likely won’t make you feel like the arena rock star of the full band games, but getting into the groove of the song (and the various instruments) was certainly as addictive as you’d expect.

One thing music and audio-recording enthusiasts might find particularly compelling is the mix of the different tracks. When any given instrument is highlighted, the volume is brought up ever so slightly in the mix. Because of this, you’ll be able to hear nuances in performance and recording that you might not ordinarily hear in a final mix down. It’s not often (if ever) that you get to hear the squeaking vocals of Michael Jackson in The Jackson 5’s “ABC” or the drum track of Nine Inch Nails’ “The Perfect Drug” quite like this.

The focus of Rock Band Unplugged is on the single-player one-man band experience, and because of this, there are no multiplayer modes. The game’s World Tour mode can be played solo, and has a similar setup to that found in Rock Band 2. Players will be able to edit the individual rockers in their full band (name, attitude, likeness) and play gigs across the game’s 24 cities, each of which features one venue pulled from the console game. Playing gigs will earn you cash to buy new instruments or clothing for your avatars, as well as pick up a tour van, bus, or plane as you tour the world.

Rock Band Unplugged also features a few sub-modes that change the gameplay just a bit for a different experience. The first is “Warm Up Mode,” which was described as a more “casual” mode for beginners or for those interested in focusing on a specific instrument. In this mode, players are only responsible for the note chart for one instrument; there’s no need to switch between tracks, as they’ll continue to play as back-up.

“Band Survival Mode,” on the other hand, takes things in an entirely different direction. Instead of triggering tracks by completing phrases, in this mode the game keeps all four note tracks on-screen at the same time. The “crowd meter” for the instrument tracks you’re not playing will continue to drop, so it’s up to you to juggle the tracks, finding “holes,” streaks, and other opportunities to hop between them.

Not only is this mode tough, but it sounds freakin’ impossible on paper. It’s not. According to Harmonix, there’s record of folks from Backbone completing some songs on Expert difficulty in this mode with “5 Gold Star” honors. Considering the amount of time they’ve had to spend with the game while developing it, it’s clear “Band Survival Mode” is for players who are looking for insane, finger-bleeding challenges.

Rock Band Unplugged will feature 41 tracks, all master recordings, as has become expected from the franchise. Like its console big brother, the game will also feature a fully functional Rock Band Music Store built right into the game, a first for any PSP title. Pricing for the tracks hasn’t been announced, but it’s likely to be in line with what we’re already getting with Rock Band DLC (between $0.99 and $1.99). We’re also told that ten tracks will be available on the store at launch. Harmonix isn’t ready to commit to weekly updates just yet, but they’re saying they’re committed to updating with fresh content regularly, so start scrounging around in your couches for change now.

Twenty of the game’s forty tracks have been announced, and are listed below. The tracks exclusive to Rock Band Unplugged for a limited time are in bold.