Last month, Harmonix unveiled Rock Band Network, an upcoming service that will allow musicians to get their songs into Rock Band and actually make cold, hard cash by doing so. It’s a groundbreaking project that has the potential to change the face of the music industry. In fact, indie label Sub Pop is already convinced — A&R executive Tony Kiewel recently said that the company is looking into releasing some of its back catalog (including artists like Nirvana and The Shins), as well as future music, on Rock Band Network; he imagines such a digital release as just “another format alongside vinyl and CD.”

But how is this all going to work? How do you get from recording a song in real life to actually putting it up for sale through Rock Band Network? And how accessible is the process? I headed to MTV’s offices in Times Square on Tuesday to find out the answers to those questions and more — hit the jump for a detailed write-up on the future of music. 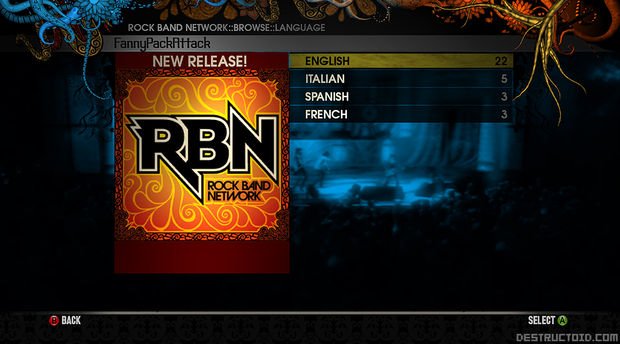 Two Harmonix developers demoed Rock Band Network to us: Audio Lead Caleb Epps and Senior Producer Matthew Nordhaus. According to Epps, the idea that was a precursor to Rock Band Network was that Harmonix needed better internal tools to author Rock Band tracks. Harmonix had always done them by hand, which was a painstakingly slow process, so they went looking for a better method. What they ended up with was a customized version of Reaper, a PC/Mac digital audio workstation that’s similar to software like Pro Tools. 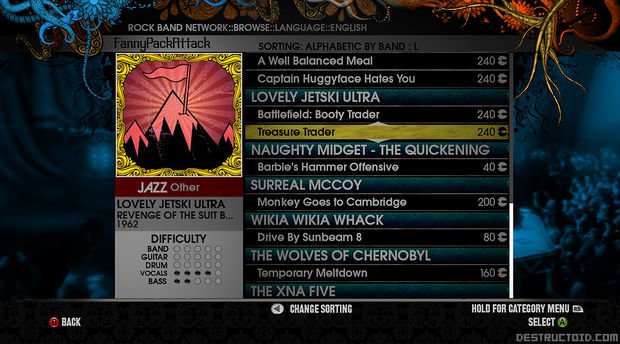 Apart from a few extra controls, the version of Reaper that Harmonix is making available to RBN users is functionally identical to the internal tools that the developers themselves will eventually use to author songs (Epps explained that Harmonix isn’t entirely switched over to the new system yet, but some employees, including him, are already using it). “As part of the Rock Band Network, we’re laying our entire MIDI specification bare,” said Epps, so you’ll be working with fully featured, unadulterated software.

Nordhaus outlined four steps to getting music onto Rock Band Network: (1) create the gameplay in MIDI in Reaper; (2) compile the audio and note charts into a song file and audition it on a 360; (3) upload the song to the RBN Web site for peer review; (4) get it into the RBN store upon approval. It’s a rather complex and involved process, and it’s definitely not for everyone. The backbone of Rock Band Network is Microsoft’s XNA development setup, so you’ll need an XNA Creator’s Club account ($49 for four months or $99 for a year) to participate. 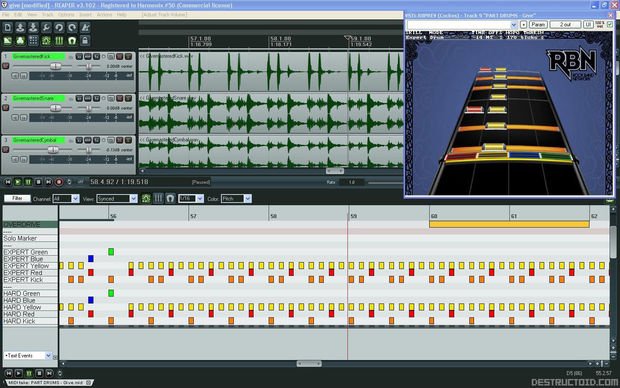 I’m not familiar with MIDI authoring programs like Logic Pro or GarageBand, so to me, the basic interface of Reaper looked pretty damn intimidating. Harmonix is offering comprehensive documentation on the RBN Web site with “all the accumulated knowledge that [they have] come up with over the years,” but Epps cautioned, “This is a technical thing you have to do — this isn’t just ‘mash a bunch of buttons and gems come out.’ You have to have some understanding of music and of audio, because the audio you put in is exactly what’s going to appear in the game.”

To begin, you create a “tempo map,” the foundation for your song. Thanks to a custom Harmonix macro for Reaper, you can automate this process to an extent; the program will detect bass drum hits and set the beat accordingly. Then you draw in your note gems. This has to be done note by note, and unlike GHStudio in Guitar Hero — which will use your note input as the Expert chart and automatically generate charts for lower difficulties — you’re responsible for creating the Hard, Medium, and Easy charts as well. You have full control over how your songs look in the game, right down to the animations for your drummer as well as camera cuts and lighting.

If you’re more comfortable with playing the vocal part on a keyboard, you can do that. Getting your lyrics in is very easy — just put them in a text file with multi-syllable words split up, and load that document into Reaper. Once your song is all set up, you use a tool called Magma (PC only, because it has to connect to the 360) to compile the audio and note charts together before you send the whole thing to your 360 to try playing it. Magma is also where you set the price of your song (80, 160, or 240 Microsoft Points — that is, $1, $2, or $3), input your song’s information (artist, title, genre, etc.), make minor mixing tweaks, and set difficulty. You can even upload album art from your computer. 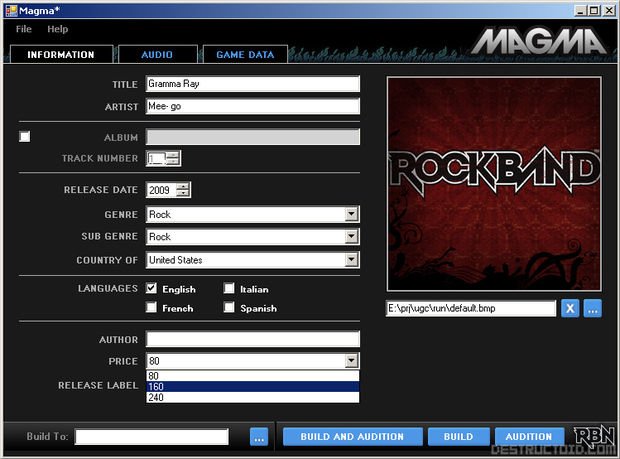 Magma’s song info has a separate slot for “Author,” which allows for individuals or groups to be recognized for actually putting a song onto RBN as opposed to creating it. Companies like Rhythm Authors have already sprung up, offering their services to musicians who want to sell their songs through RBN but don’t know their way around authoring software. The RBN store will let you browse by author, so such companies will be able to grow their reputations as authors.

An upcoming patch for Rock Band 2 will add “Audition” to the game’s Extras menu. That’s the place to test created songs, whether they’re your own, or ones you’ve downloaded for review. Songs can only be auditioned one at a time and cannot be played with friends online. It’s designed specifically to help you test your songs — you can set parts (guitar/bass/drum) to play automatically and adjust speed on the fly (for example, slow a song down to make sure that the in-game drummer is hitting the right things at the right times). The interface shows the number of the current measure, too, so you’ll be able to easily keep track of the places to make changes back in Reaper.

Also included in the patch is the Rock Band Network Store, which is separate from the regular DLC store. Here, you can browse RBN songs in a variety of ways (including author, artist, country of origin, and genre), and demos are available for every song — you’ll get to play the first minute or 35% of the song, whichever is less. Users can rate songs from zero to five “lighters,” too. Once a song is purchased, it’ll show up in Quickplay just like any other Rock Band track, and when it’s being played, an RBN song is indistinguishable from a regular Rock Band song. 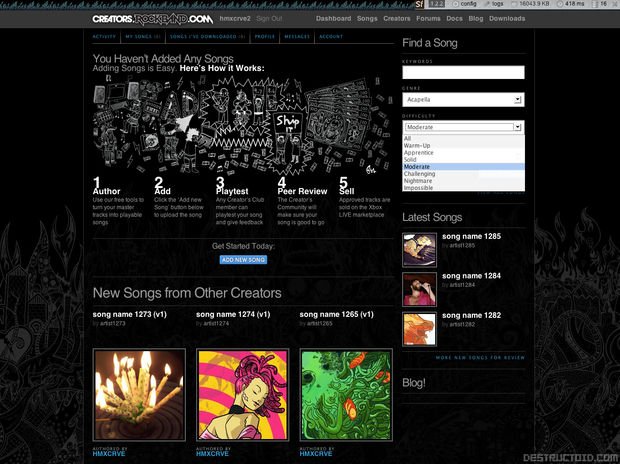 The final part of the Rock Band Network experience is creators.rockband.com. Currently, the full functionality of the Web site is available only to RBN beta testers, but upon launch, it’s going to be the home for the RBN authoring community. There, authors will post new songs, which will be in one of two states: playtest and peer review. When a song is in the playtest stage, the author is looking for comments and suggestions from players on how to refine the track (each song will have its own forum thread).

Once an author is satisfied with a song, he/she will put it up for XNA peer review. In that step of the process, other XNA Creator’s Club members will look at the song and ensure that it meets the RBN Store criteria (for example, in order to keep everything within Rock Band’s “T” rating, profanity is verboten). If a song passes peer review, it’ll be put on the RBN Store for the world to buy. Just like all XNA developers, authors will get paid every quarter — in this case, they’ll receive 30% of the proceeds from a song’s sales. 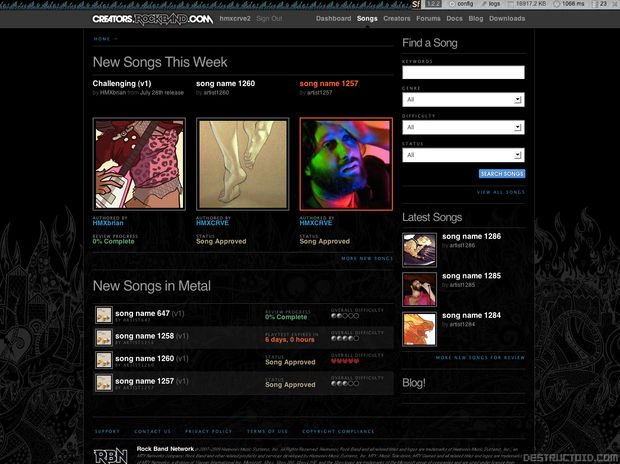 It’s apparent that Rock Band Network will require a significant investment of time and money, but I imagine that it’ll be worth it for musicians who are looking for a new avenue to sell their songs. Who knows? In the future, we may see lesser known artists put out Rock Band Network versions of their music day and date with the CD and iTunes releases.