Most of the PSP owners I know had been struggling to find a reason to turn their handhelds on for quite some time. But Sony’s leading the charge with potentially great software in 2009 — LocoRoco 2 was released in North America last week, to rave reviews, and Patapon 2 will be out here in early May.

Insomniac’s Resistance series is arguably the flagship franchise for the PlayStation 3, and now, Sony is downsizing it for portable play with Resistance: Retribution, due out on March 17th worldwide. It’s been in development at Sony Bend, the studio behind all the Syphon Filter games (including the highly regarded PSP titles Dark Mirror and Logan’s Shadow).

I got some hands-on time with Retribution at a Sony press event during New York Comic Con, and it’s looking like it’ll be a worthy addition to the Resistance world. Hit the jump for details.

[Editor’s note: Be warned — the preview discusses story elements of Resistance: Fall of Man and Resistance 2; in other words, mild spoilers ahead. –Samit] 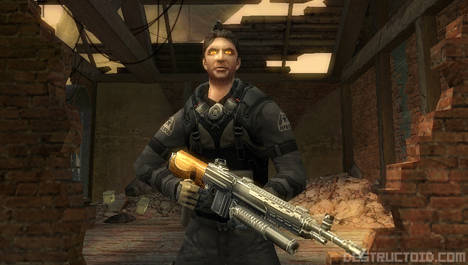 According to John Garvin, Director of Product Development at Sony Bend, one of the development challenges was the look and feel of the game. Resistance 2 retains some thematic elements from Fall of Man, but the sequel certainly changes things up visually — so the developers brought certain parts of R2’s aesthetic into the fold and combined them with the appearance of R1. The same philosophy was applied to other aspects of the game: Retribution contains weapons, enemies, and characters from both titles.

But as for the hero of the story himself, well, you play as a completely new character, James Grayson. Garvin told me that they decided against making Nathan Hale the protagonist since they didn’t want the PSP game to be seen as a mere port, or “a lesser version of R1.” Retribution takes place “days after the end of” Resistance: Fall of Man; the idea with Retribution was “to create a game that bridged R1 and R2.” Accordingly, the story in Retribution tackles questions that the two PS3 games didn’t address, including the following: (1) Why were there no women in the original game, and (2) Why did the Chimera shift to using Spinners [conversion machines in the field] in R2, instead of doing conversions in factories?

If you’re familiar with the original Resistance, you know that the game took place in England; the Chimera had already swept westward from Russia, and, having conquered mainland Europe, moved on to Britain. But what happened to Europe? Had it just become a barren wasteland, devoid of human life? Not quite — and that’s the focus of Retribution. Grayson’s tale is at once “a personal one” and “a huge, epic storyline,” as humanity is fighting back against the alien invasion. As it turns out, there were survivors in Europe, and once they heard that the Chimeran tower in London had been destroyed, they came to England and asked for assistance; Grayson goes back with them to help them out. 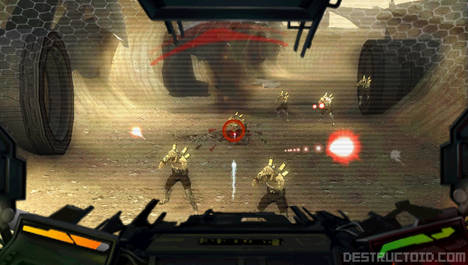 The entirety of Retribution is set in Europe, in such locations as “what’s left of” Germany, France, and The Netherlands. Rachel Parker, the narrator from R1, is back — Garvin “really liked that approach to storytelling” — but there’s also an hour and a half of rendered movies and “a lot of dialogue” in this rather massive, fully produced PSP game. Retribution is running on the only third-generation PSP engine in existence, a modified version of the one used in 2007’s Syphon Filter: Logan’s Shadow. The game is played from a third-person viewpoint, whereas the PS3 Resistance titles were both first-person shooters.

You may be thinking, “But Samit, how will I control a shooter on the PSP without a right analog stick?” Fear not — Sony Bend’s got you covered. Remember how the four yellow C buttons on the Nintendo 64 controller were used for camera control in games like Perfect Dark? Well, the four PSP face buttons serve the same purpose in Retribution (this is the way it worked in Logan’s Shadow as well). But Garvin explained that they had to add an extra element, since the enemies of Resistance are so different from Syphon Filter baddies — namely, they can move around very quickly.

That extra element is called Aim Assist. You may have noticed it in some screenshots — there’s a rectangular box on-screen, and as long as you keep your enemies within that space, the game will automatically lock onto them. To switch targets, you merely tap the face buttons in the direction you want the lock-on reticle to move (e.g., press triangle to target an enemy above your current target, square for an enemy to your left, etc.). If there are enemies on-screen, Grayson will automatically take cover behind objects — all you have to do is walk up to, say, a concrete barrier, and he’ll duck and stick to it. Pressing left or right on the D-pad switches weapons, while holding either button will stop the action and bring up the weapon selection overlay that Resistance players will be familiar with from the PS3 games. 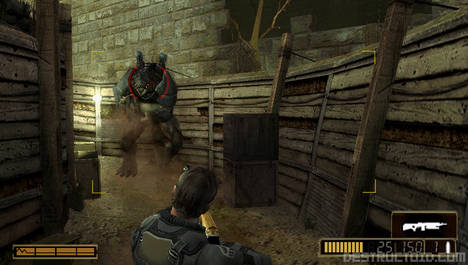 I played a level in Bonn, Germany, where the Rhine River had completely dried up because the Chimera had diverted it for some fiendish purpose. I started out in an elevator; there was a switch behind me with a red light on it (more on that later). As I moved forward and took down some airborne enemies, I felt immensely impressed at how well Sony Bend had been able to translate the core gameplay of the Resistance PS3 games for the PSP. Aside from the new mechanics (third-person, single stick plus face buttons, automatic cover), the same basic gunplay was there — a linear, somewhat tactical shooter (in the sense that you have to use different weapons in different scenarios) with the enemies I’d come to despise, like Hybrids and Titans. Sony Bend absolutely nailed the “feel” of Resistance.

Garvin also showed me PSP Plus, which is the innovative PSP-to-PS3 connectivity that’s been implemented between Resistance: Retribution and Resistance 2, and something that they’re calling “Infection.” When you “infect” your PSP, it gives Grayson the virus, so his health regenerates (like Hale’s), and as an infected character, cutscenes will change (your allies are now somewhat suspicious of you). In addition, he’ll have access to new areas (the switch I mentioned earlier turns green when you’re infected) where he can collect intel documents that delve deeper into the backstory of the franchise. You also get a bad-ass new weapon, the HE .44 Magnum, which fires explosive rounds.

PSP Plus is pretty cool — when you hook up your PSP to a PS3 that’s running R2, you can play Retribution with a PS3 controller! This isn’t just a cosmetic thing; it completely alters the game. With a dual-stick control scheme, the aim assist box is deactivated, and the game’s difficulty is ramped up as well. And if you have a PSP-2000 or a PSP-3000, you can use the video out feature to play the game on your HDTV (though it won’t look any better, of course). For more details on Infection and PSP Plus, you can check out Conrad’s post from CES. 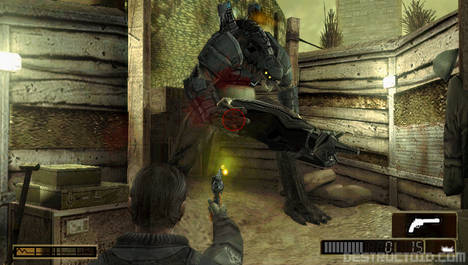 Resistance: Retribution is about eight to ten hours long, according to Garvin. It seems like it packs a lot of content into a UMD, especially for gamers who already own Resistance 2 for the PS3. Sony Bend really seems to be doing Insomniac’s pedigree justice here, so if you’re a fan of the franchise and you own a PSP, there’s no reason not to pick it up when it launches on March 17th.