You can never have too much Ratchet & Clank. The lively Lombax and rascally robot are lacing up their hover boots for yet another outing, this time in the form of a second downloadable PlayStation Network title, Ratchet & Clank: Full Frontal Assault.

Yes, we are witness to the triumphant return of the double entendre game title, following its piratical PSN predecessor, A Quest for Booty. With it, I can only hope for of the series’ equally lighthearted and uproarious humor to be on full display, though I haven’t seen any of the story elements first hand. We could always use more games we can laugh at; intentionally, anyways. Then we smash, shoot and explode all the things. Also, defend bases. Because someone got tower defense in our Ratchet — and it’s looking fairly tasty. 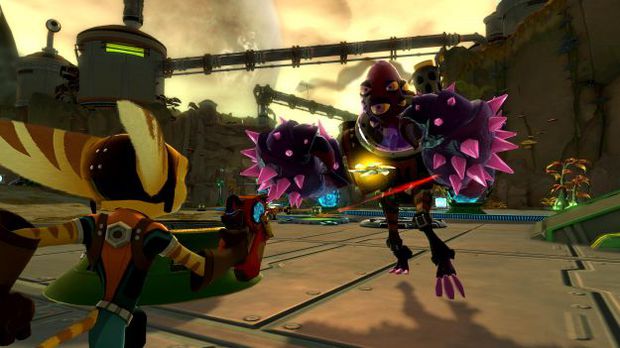 Returning in Full Frontal Assault is everyone’s favorite buffoon, Captain Copernicus Leslie Qwark. After losing the presidency (don’t ask me how he managed to win it in the first place), the galaxy’s greatest hero is despondent, lounging around in a fuzzy pink bathrobe and shunning the world. The good-natured duo of Ratchet and Clank visit their old friend to cheer him up when an enemy from Qwark’s past returns to threaten the galaxy, spurring Qwark to reassemble the Q-Force from Up Your Arsenal; naturally, Ratchet and Clank are conscripted once again.

Now, this is all familiar if you’ve played a Ratchet & Clank game. The galaxy is imperiled, you’ve got to stop some bad alien dudes. The key difference in Full Front Assault is how you have to stop your opposition. The Grungarians, rough alien mercenaries working under the direction of the yet to be divulged lead baddie, have disabled planet defense centers, turning the galaxy’s defenses into a vulnerable array of Swiss cheese. This is where the new tower defense mechanics come into play.

The single-player component starts Ratchet off at a tower that he will eventually need to defend. Here, you’ll find a weapon pod with a starter weapon, like his Combustor, and a few boxes. From this point, Ratchet can branch outward, searching for more weapon pods to expand his arsenal, collecting bolts, and shooting and exploding alien scum with his ever increasing arsenal. 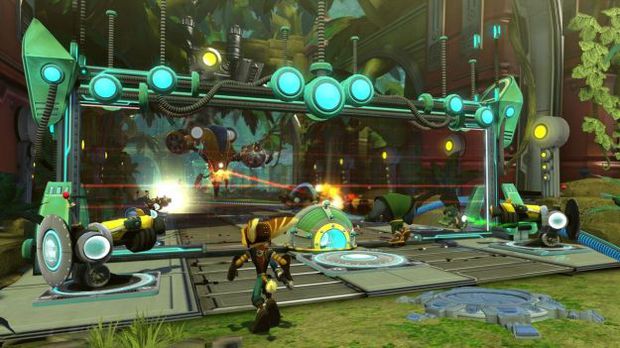 Full Frontal Assault will feature a sort of “greatest hits” of past Ratchet weapons, as well as a few ones. When you come across a weapon pod, you will be able to choose between one of three available weapons to add to your inventory. In Ratchet & Clank fashion, there will be plenty of more out of the way areas, like a hidden alien temple, which are more likely to contain powerful weapons. Abetting Ratchet’s travel needs are the handy hover boots from A Crack in Time, with some added flips and maneuvers.

After a period of exploration, bolt collecting and alien blasting, you will get notifications that an attack on the tower is imminent and it needs defending, so you’ll have to mosey on over. Once back, you can spend your accumulated bolts on various tower defenses, like barriers that block enemies from crossing into the base on a certain path, turrets, mines, and so on. You’ll also be able to cleverly use your defenses in unison. For example, you can fit a path with a barrier and a time mine, the latter of which slows down all enemies in its blast radius. Then, you can add two flamethrower turrets across from each other, in front of the barrier. As enemies run it, the barrier will keep them bottlenecked, the time mine will slow them, and the flame throwers will barbecue them.

Of course, there will be different strategies for base defense; hopefully a lot, given the repurposing of Ratchet’s wonderfully creative arsenal. You can choose to deck out one opening with defenses and let Ratchet handle the other by himself, for example. You could also center your defenses inside the base area and take on enemies in a more open area.

When it comes to taking out enemies personally, the timeless, familiar Ratchet third-person gunplay persists. You strafe while shooting enormously explosive weaponry in a perpetual string of sideways flips, watching Ratchet’s tail mesmerizingly whip around. Seriously, there’s something so consistently satisfying about Ratchet’s sideways jump flips as you rein down explosives with panache. Aside from the Combustor, I spotted a few familiar weapons, like the hilariously deadly Mr. Zurkon, who floats over Ratchet’s shoulder, helping him kill things while spouting great one liners; the Cryogun, which freezes enemies, letting you shatter them into gorgeous little icy fragments; and, the Groovitron Glove, which tosses out a disco balls, rendering all enemies in its vicinity unable to resist the urge to boogey down. Still, it’s not a Ratchet & Clank game without a gun for turning your enemies into animals; in Full Frontal Assault, you can turn them into creepy orange goats that breathe fire at their former comrades. 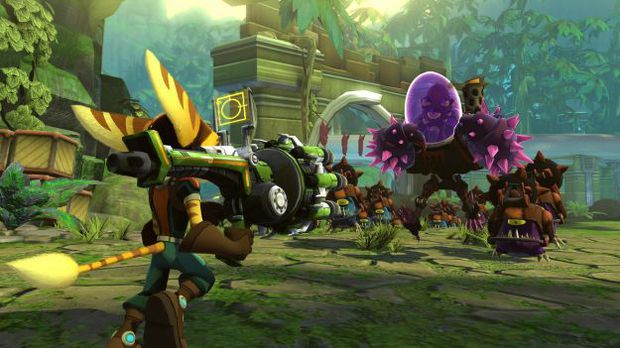 After you defeat a wave of attackers, you can go back to exploring levels until more waves are sent. Once you’re done with a level and ready to fully secure the planet, the Grungarians will send everything and the kitchen sink at you; take care of the final wave and you can move on to another level.

Stages can be played solo or cooperatively. Thankfully, the cooperative play is both online and local, so when you’re playing locally, you’ll get the pleasure of looking at your friends of family with a damning glare when they choose fuzzy pink bathrobe Qwark before you do; Ratchet and Clank, of course, are also playable.

Full Front Assault will also have a competitive multiplayer portion, which is still under wraps. Smart money is on (at least) one-on-one tower defense, which will undoubtedly be reminiscent of Up Your Arsenal’s brilliant siege mode, which the Insomniac folks are still quite keen on. You can annihilate all the things (well, except your towers) sometime this fall.