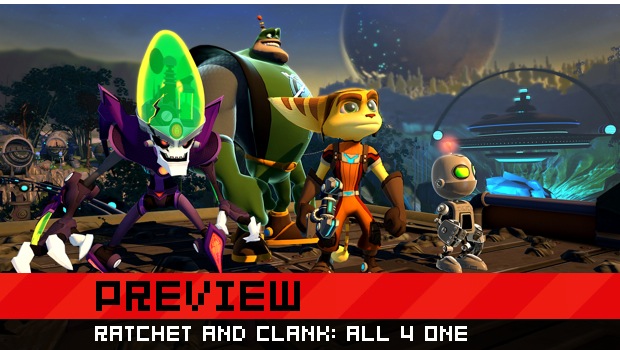 At a press event last night, Insomniac said that making a 4-player cooperative Ratchet and Clank game has been a dream project for them. This is the first group co-op title in the ten-game series for them, so it had the team trying new things. It seems like they had a great time making it, and that’s probably why it’s a bunch of fun to play.

All 4 One is 4-player co-op served any way you like. Online or off, drop in or out at any time, and full support for any number of players — even solo, with CPU stand-ins. Of course, the game stars both series heroes, Ratchet and Clank, as well as Qwark and bad guy Dr. Nefarious. The stage is set when Nefarious tries to snare our heroes in a trap. His evil plan has to take a back seat when a mysterious craft called the Creature Collector shows up and puts them all in danger. Now Ratchet, Clank, Qwark and Nefarious are forced to work together to get away from this craft and set the world right again.

Although the core game play from previous Ratchet and Clank titles remains mostly intact, Insomniac had to make several changes to fit this into a group co-op format. Fans of the series will instantly notice the change in presentation. The third-person camera that hovers over the shoulder of Ratchet has been replaced with a wider shot that moves to encompass all four players at once. This has you controlling smaller characters on screen, but they’re put into a world that seems more vast, so it works out. 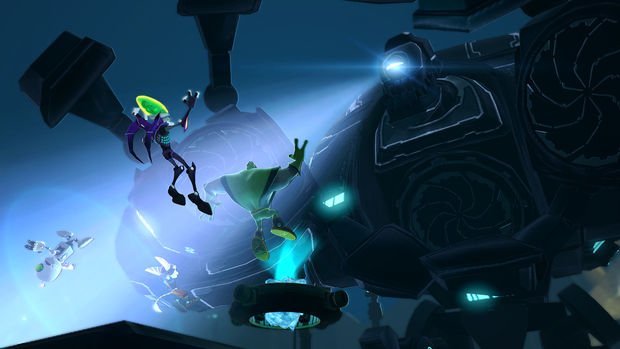 The control set is very similar to previous games — even the weapon wheel remains — but the gameplay has been refocused for teamwork, with weapons being a prime example. For example, a vacuum gun can hold an enemy captive for another player to finish off. Many obstacles and enemies in the game require interaction from all players to proceed. Everything from opening gates to fighting bosses requires constant communication. From what I’ve seen so far Insomniac has done a great job with how they made players work together; the game manages to draw a group of players into it easily.

There’s still a level of competition in this game with every man (or Lombax?) for himself when it comes to the collection of bolts. Like other multiplayer co-op games, with the goodies in this game it’s still a case of see it, grab it. The player with the most bolts is the one that gets the cool weapons first, leaving other players to watch on in jealousy. It was also revealed that each player will also have a unique weapon that gives their character a sort of character class type contribution to the team. 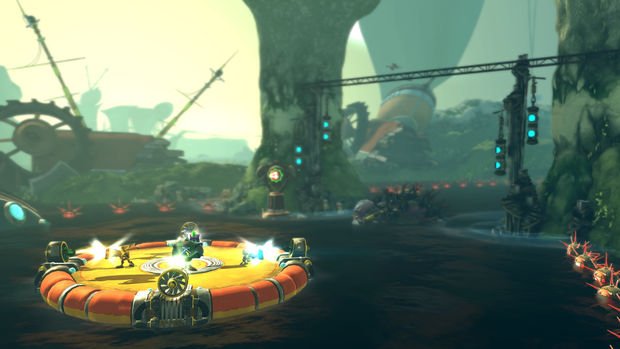 Insomniac showed us a new stage called Octonok Reef, where the four players started out in a river, on a raft. Each player had its own role, which constantly switched. All players had to man one of four fans on each side of the raft that propelled it down the river. Some had to stop momentarily and kill approaching enemies and others had to remove obstacles or open gates. Eventually they make their way to dry land and enter the Terawatt forest, where they use teamwork to get through closed smaller boss sections that Insomniac called arena battles. Later, the team encounters a massive robot called a Guardian. The part is able to conquer and ride the Guardian, sitting atop its head and using mounted turrets to gun down enemies. As the stage progresses, the team uses its Guardian to battle other attacking Guardians. This stage served as an example of what Insomniac calls “cinematic co-op” — big set pieces, lots of scene changes. 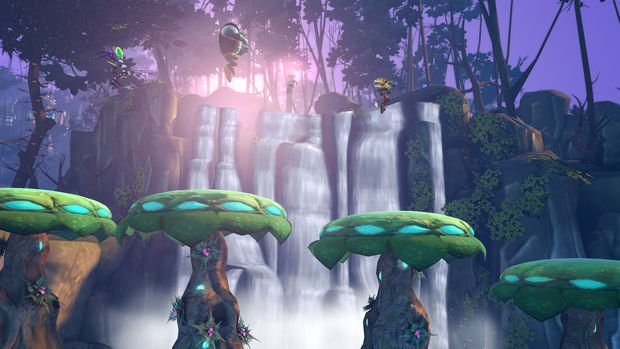 I managed to play a couple of other stages in four-player teams with other event attendees. I found that right off the bat you’re relying on the other three players to move past obstacles or cross wide gaps in bridges. We learned together by jumping across a gap at the same time — and dying at the same time — that firing one player across the gap with the vacuum gun was a better choice. Some platforming puzzles made use of one of the neatest co-op devices in All 4 One, a slingshot attachment that automatically latches onto the nearest player. With a press of the triangle button a line shoots and connects to the nearest player. This can be used to pull yourself across a large gap easily. It can also be used to catch up with other players when you’re behind. One platforming section involved a very large gap where all four players had to tether to each other, swing, and then tether to another point. Each player had to hold down the triangle button for dear life.

Ratchet and Clank: All 4 One supports stereoscopic 3D. The game looks great with or without 3D, but the 3D demo stage I saw had lots of floating platforms, and the effect seemed to make them stand out against the background scenery nicely. The 3D isn’t eye-poppingly pronounced; it’s just enough to give the game a little bit of extra visual punch if you happen to have a 3D display in your home. 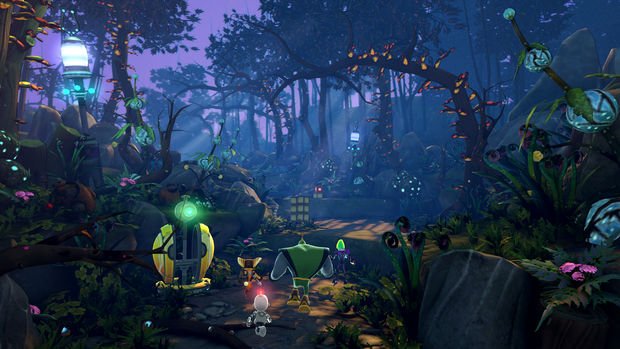 Ratchet and Clank: All 4 One casts the net a bit wider than your standard group co-op game. Insomniac’s goal of “cinematic co-op” shows, as there’s such a variety of scenery, set pieces, big bosses and challenges to keep players entertained in these stages. The cool dynamic of having players work together while in competition really fits the series and characters. The biggest difference between this and other group co-op games is that there’s actually a grand story that the players will move through together. You’d expect no less from a Ratchet and Clank game. We got only a small taste of this story, but it looks like it’s going to be a great ride.

Ratchet and Clank: All 4 One will come to the PS3 this fall.