A wise man once told me that one’s worth is measured by one’s vocabulary. Okay, nobody’s ever told me that, but you’d better believe that you will live and die by that maxim when it comes to Quarrel.

Quarrel is a quirky take on the “word game” genre: think a mix of Scrabble with a bit of Risk, and add in a warm color palette and a whimsical tone for good measure. The objective of the game is standard fare as far as territory acquisition goes — eliminate all players and take control of all the territory on the map. The twist here is that a careful strategy isn’t enough to secure dominion in Quarrel. You must also be able to make fancier, purdier words out of the anagrams provided by the game in order to best your opponent. 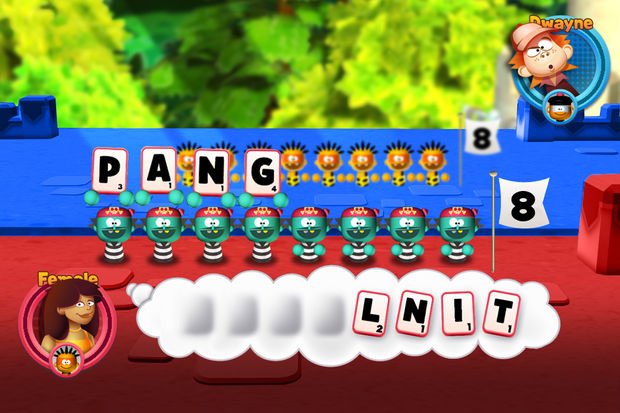 Players start the game by controlling an equal number of territories and troops. You take turns moving about the map and take control of new territories by battling opponents with the available troops. What I saw was an early level against a dim-witted AI, where there were only a handful of sections on the map being contested. The number of soldiers — which can be silly things like aliens, cowboys and so on — represents the number of letters available to a player. These units thus also dictate word size — having five troops, for example, will mean having to make a five letter word.

Like Scrabble, each letter is worth a certain number of points, with vowels typically valued less than consonants. Troop size isn’t the only thing that influences point-totals, though: if the player manages to construct the specific word that the word tiles are an anagram of, then the player receives a massive bonus to their point total.

Quarrel is an especially competitive experience when you consider that all players acquire the same tiles — meaning that there is less of an element of randomness involved. You can’t blame your laughable score on having only X, Y, Z tiles anymore! It can also be an educational experience: definitions of the specific word the game is fishing for displays across the bottom of the screen at the end of a turn. In just fifteen minutes with the game, I added a couple of new words to my repertoire, though I still maintain that “funster” doesn’t sound like a real word. 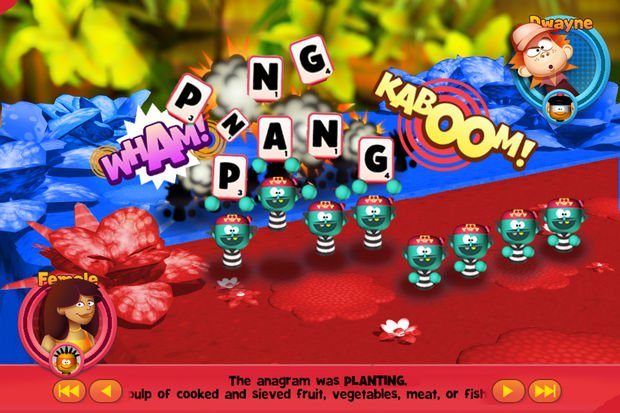 Losing an individual battle and having a troop dwindle down to a couple of soldiers doesn’t doom that troop to an inevitable demise, though. Players can choose to ration out remaining troops as they see fit, though doing so puts the newly-bolstered troop out of commission for that turn. This adds another layer of complexity to the strategy involved when playing Quarrel.

It’s not unusual for games of Scrabble to take forever while players try to come up with optimal words. Quarrel players can can find themselves in similar situations, but the title lends itself to pick-up-and-play scenarios, too. Not only can time limits on turns be imposed, but games can be instantly ended via a sudden death. In sudden death, each player will be given a final anagram, and the player with the highest point total from that round wins the entire game regardless of how many points were on the scoreboard prior to the sudden death.

Quarrel features different game modes and multiplayer though I only caught a glimpse of the core game against an AI opponent. It is set to launch on mobile platforms this Summer, though “home console downloads” may be in the title’s future, if not Facebook too, according to the developer.