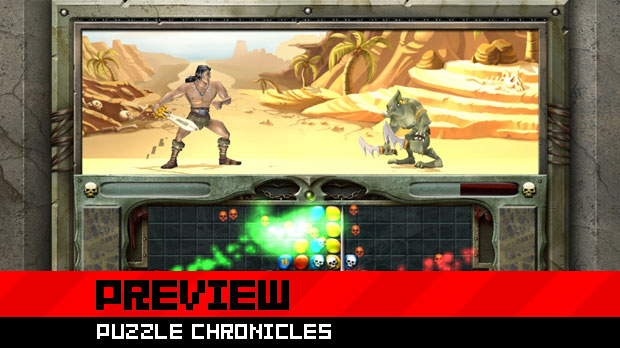 One of the oddities of Konami Gamer’s Night is that some pretty interesting games were unveiled, yet nothing was said about them. Case in point: Puzzle Chronicles.

Here is a puzzle game/RPG in the same vein as Puzzle Quest, made by the same people as Puzzle Quest, and coming to virtually every platform imaginable (PSP, DS, XLA, PSN, and possibly more), and yet nothing was announced at the event. Sure, they had the game ready to play with a laptop and an Xbox controller, but when you and another journalist sit down and play the game for a full 15 minutes before a representative comes over, something seems fishy.

Thankfully, I was able to work things out, and I probably spent more time with Puzzle Chronicles than any other game that night. So what exactly is it? What does it represent for the new field of puzzle/RPG games? And should we care? Well, hit the jump, and I’ll explain.

Right off the bat, players familiar with Puzzle Quest are going to notice similarities with Puzzle Chronicles. From the character-driven storyline to the shops and missions, to an overworld map — even to trainable pets that can offer new abilities to you (and maybe act as mounts) — Puzzle Chronicles feels a whole lot like Puzzle Quest. Thankfully, the game’s aesthetic, which looks like a bright colorful animated world resplendent with an ancient Egyptian feel, is certainly a step away from Puzzle Quest’s anime-influenced middle ages art direction.

It’s at that point that the two games’ similarities end. First of all, Puzzle Chronicles has a very different gameplay core than Puzzle Quest. Battles take place on a horizontally oriented field, which fills up about two-thirds of the screen. Split down the middle is a line that separates your part of the playing field and that of your opponent. As your character does damage and attacks, or receives damage and attacks, that line will move left and right. The goal is to make your playing field as big as possible, and to force your opponent to top out.

So here’s how battles pan out: gems from the left come out in lines of three. The center gem cannot be rotated out of center, but the two outside gems can be moved around. Each gem can be one of four colors, and can be blank, a “wild” gem, have a skull on it, or have some sort of Egyptian symbol.

Basically, what you need to do is get as many of the same-colored gems touching each other, and then delete them with the Egyptian symbol. Wild gems can represent any gem color, and if you get any skulls deleted, then they will contribute to a meter above the playing field. Fill up that meter and your main character (represented above the playing field as a brutish, barely clothed dude) will leap forward and attack, sending that center bar over towards your opponent’s half.

Another tactic is to group four like-colored gems in a square; they will transform into a larger gem and will have stuff like a sword or a necklace inside. It looks like these will lead to a specific bonus or attack. And although they were not in the build of Puzzle Chronicles, there were blank areas on the left and right side of the playing field. I’m told these areas will hold the spells and attacks that you can use. It looks like even those blank gems will be put to use through this spell system.

However, one problem I had with the game is the speed and the controls. While I’m far from the best puzzle gamer, I expect a decent clip with my games. Not so with Puzzle Chronicles. It might be due to the versus nature of the game, or the fact that I was playing a very early portion of the story, but damn if those gems don’t move sloooow. It doesn’t help that everything is moving from left to center and to rotate the gems you use the right stick. Plus, to make gems drop you tap the A button, wait for a delay, and then the gems fall into play. It feels a bit convoluted, but I’m just hoping it’s something we can learn to deal with.

Puzzle Chronicles is an interesting beast. It’s surely a game we are going to hear about more in the future, and the way it seems to take elements from Puzzle Quest, Puzzle Fighter, Columns and the multiplayer mode of Lumines is very interesting. There’s a lot going on, and there is certainly a lot of potential. We’ll just have to see when we get more hands-on with Puzzle Chronicles.