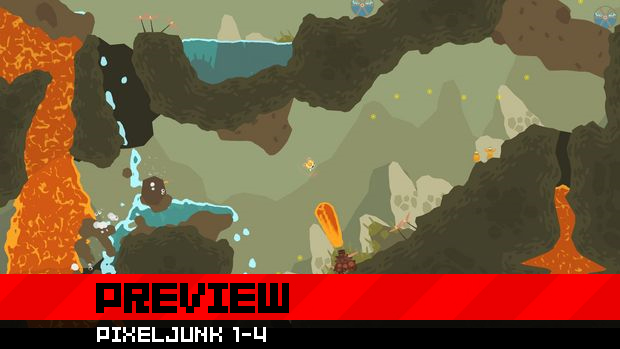 The PixelJunk titles are among my favorite time-wasters on the PlayStation 3. Eden is a game that I can turn on at just about any time for some much needed relaxation and Monsters flies in the face of my general opinion of tower defense games. So, yeah, I’m a fan.

That’s why I was so excited to get a look at the latest title in the series from Q-Games, the as yet unnamed PixelJunk 1-4. It may very well be their most addictive and fun game to date and I’m thrilled to be bringing you Destructoid’s first look at the title. It’s just a click away.

It seems that Q-Games’ modus operandi for the PixelJunk series of games is to take time-tested game concepts and tweak them into fresh and unique gaming experiences with a bold visual style. The new title, currently referred to internally as “1-4,” looks to be drawing its cues from classic shooter-based games like H.E.R.O. and Defender.

In 1-4, you control a search and rescue craft and are charged with rescuing people who have become trapped in caverns below the planet’s surface. Each stage of the game requires you to deal with all of the survivors — either by rescuing them or allowing them to die — before you can progress on to the next area. Obviously, one of these results is preferable to the other, but you need not rescue absolutely everyone.

Many dangers await you in the caverns, but you do not come unprepared. Your vessel is equipped with rockets, which may be fired either as a rapid stream of small projectiles, or by charging up for a large missile attack that does a devastating amount of damage. In addition to your weaponry, the ship has a grappling arm, which is used to grab wayward humans, collect power-ups and carry objects found in the environment.

The greatest threat to your mission is heat. The caverns are filled with lava, with jutting volcanos spewing the stuff all over and veritable rivers of hot liquid magma coursing through the cavern’s rocky veins. As you get closer to pools of lava, your ship begins to accumulate heat. Representing this is a gauge in the lower left corner — which acts as the game’s health bar — and you can see the shimmer of high temperature emanating off the ship. Build up too much heat and the ship’s propulsion systems will fail, causing you to fall to your imminent destruction.

Balancing against all of this lava is water, and it is these two elements that create the most interesting dynamic of 1-4. Water cools anything it touches on contact. This means that if things are getting a little too hot under the collar for you, a quick splash in a pool of water will remove all of the heat from your gauge. More importantly, water cools lava and turns it into a thin crust of rock.

This rock acts in exactly the same manner as proper walls in the cavern and effectively changes the landscape by creating new places for liquids to flow and collect. There is one crucial difference between this newly created formation and existing walls, however. The cooled lava can be destroyed by your weapon’s fire, making it possible to reopen closed areas but also forcing the player to be a little more careful of errant shooting lest they wind up drowned by a flow of lava which has just found a place to travel again.

As a result of this, a major mechanic in the game becomes transporting water in order to open the way to areas within a level that are completely blocked off by lava. It’s often not possible to just have the water run down a slope and into lava, however, so some environmental objects come to your aid.

One example is a water bomb. This balloon-like object stores a tremendous amount of agua. Using it is as simple as picking it up with your grappling arm and dropping it off wherever you want water to be. Upon impact, it explodes in a shower and can fill in even deep reservoirs.

Another option is a sponge. This item absorbs liquid when sitting in a pool and begins releasing its stored fluids as soon as you pick it up. While a little harder to use than the bomb, it’s also more versatile. The sponge absorbs any liquid it touches, be it water or lava, allowing you to transfer either type wherever you may need to take it.

This aspect of the game is just brilliant and offers up so much potential for devious, fun level design. It also looks fantastic, with some exceptional fluid dynamics. Watching the way the water moves, even when only displaced by one of your missiles, is highly realistic but still manages to retain the cartoon-ish charm of the game’s art direction.

This balance between water and lava is the core of the game and opens up all sorts of puzzle opportunities. Lest you think that it’s all just about moving liquids around, there’s plenty of action to be had as well. Monsters exist in these caverns and they are highly dangerous. Some cling to the walls, others float in the air and chase you, and all shoot lava. Attacks may come in the form of small balls or massive sprays and all the magma they fire winds up in the environment.

As if that were not enough, destroying these creatures releases some of the burning liquid as well. Balancing when to kill enemies and when to let them be can be important, as monsters will eventually respawn and it might be better to simply avoid their fire than repeatedly deal with the consequences of their destruction.

I shouldn’t have to say this, since anyone who has played a PixelJunk game will already know this, but the game’s controls are as smooth as silk. The simplistic control scheme lends itself very easily to someone who knows nothing about the game picking it up and understanding how to play almost instantly. There’s a bit of a learning curve when it comes to some of the items, but just interacting with them once is enough to grasp their use.

Goddamn is it fun, too. The levels are clever and allow for players to take a few different approaches to the problems they present. Enemy fire can get pretty hectic, but all of the tools to handle them are easily in the hands of the player. It doesn’t hurt that it looks real purty, too.

Honestly, I don’t care what the name of this game is. They could call it PixelJunk DogSh*t, and I’d be the guy waiting up all night for the PlayStation Store to update when this drops. It’s just as addictive and entertaining as everything else in the series, and I’m incredibly excited for the day of its release.