Sega announced this week that Phantasy Star Online 2 is headed to the United States and Europe come 2013. This is great news for fans of the series, especially for those who thought that the spinoff sequels deviated too much from the formula that people fell in love with originally. Recently, I donned my pointy ears, grabbed my future laser lance, and snuck my way into the Japanese open beta to experience just how awesome a pure sequel to Phantasy Star Online is.

This being a Japanese beta, I will not be talking about anything story related. I’ll also not be able to comment on anything related to content that must be paid for to use, mainly due to being mostly unable to determine what that content actually was, though I did manage to find the cash shop.

Aside from that, however, I will be talking about the fluff of PSO2, the core aspects, and some of the “new” and returning features of the game. 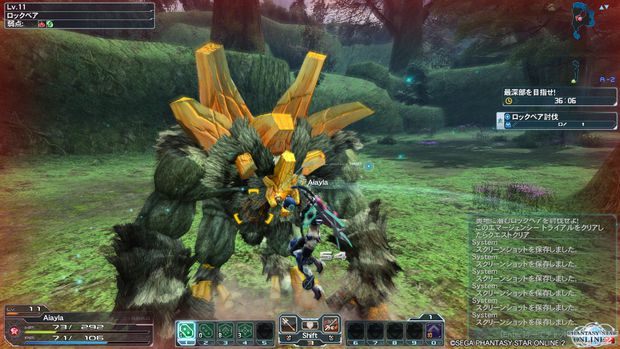 Right off the bat, the graphics stun and amaze. PSO2 is easily one of the best looking free-to-play games I have ever laid eyes on, which is saying quite a lot considering the quality of many recent titles to use that model. The style is very Japanese, which is staple for the series, but it doesn’t go all the way in the direction of cell shading, leading to a clean and sharp anime-inspired look. I also really love the level of motion blur added to most of the actions in the game. They make the already amazing animations of the characters look even more authoritative, and fast-paced. Turning into a blur from dodging really adds to that anime — or just even comic book — feel of the aesthetics.

The sound design is mostly up to the same level as the graphics. The ambient music is dynamic, shifting seamlessly in and out of different phases depending on if you’ve engaged in combat or not, and it all feels like it fits in the atmosphere of the world as well. Sound effects litter everything, with every little action in the user interface giving off a distinct sound, and combat noises really send home the punch of each attack. Hearing the “woosh” of a well-timed dodge while watching your character turn into a blur to dash away just in time to avoid the attack of a giant rock monkey thing’s massive body slam has never felt so satisfying.

This leads me away from the aesthetics into the core of the game, which is also the most satisfying part of the whole experience: the gameplay. Phantasy Star Online 2 plays most like the original, though there are lots of remnants from the following spinoff sequels still remaining. There are also a few new things thrown in that, while in a modern sense are nothing special, add new dimensions to the Phantasy Star Online formula. 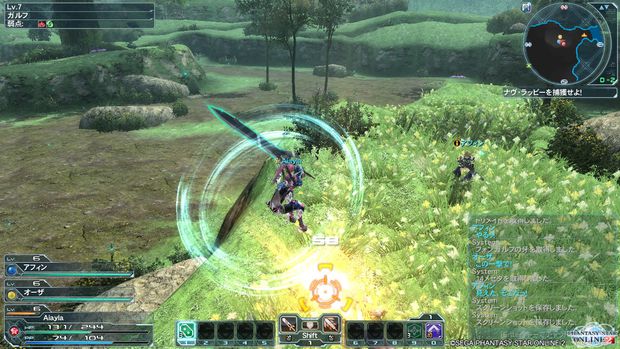 The three classes of the original are maintained. Taking a page out of the portable iterations, you can switch classes at any time, the caveat being that each class has an individual level to them. The main flow of combat also feels very similar to the original PSO. There’s an attack button, a special button, and the input order can determine new combos, which you can also customize with the new Technic Arts you learn. Each class plays its own way, with hunters heavily emphasizing strings of specials; rangers using keep away, occasionally popping skills; and forces focusing on powerful and drawn-out magics.

The timing aspect is a lot stronger here than in any of the previous Phantasy Star games. Timing your attacks and skills just right will not only pump up the damage of each one, but also make them chain into each other quicker. The same kind of timing also applies to blocking and dodging, all of which really does help the combat feel like it has more oomph than other MMORPGs.

Other new aspects include the ability to jump, a full-on free-aiming, third-person, over-the-shoulder mode, as well as a customizable skill tree. The ability to jump may not sound like much, especially in the context of modern gaming, but it really does allow for more varied level geometry, with areas that have varying heights, and flying enemies that don’t require using a ranged weapon. Free aiming allows you to more precisely aim for weak points on enemies, and gives you a greater sense of control of your attacks.

From what I can tell, there is still plenty of reason to continue using auto aim, which does allow for a wider view of the area, and the easier targeting of enemies, even should you not be doing as much damage with each hit. The skill trees each class has allow you to mold and customize the stats of your characters to make one that is truly yours. It doesn’t seem like anything overbearing or demanding, and feels like a fit replacement for just dumping points into stats each time you level up. 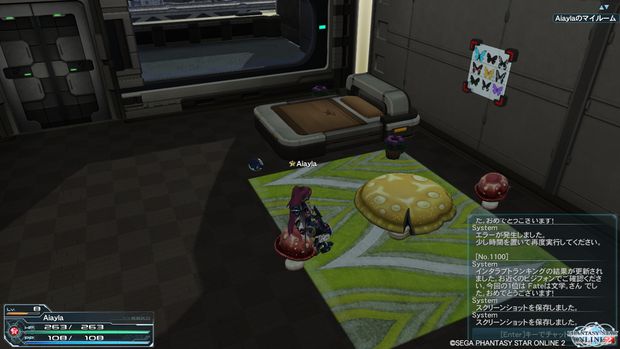 MAGs, the little buddy robots you feed and evolve, also make their return, though it is a little bit before you can get a license to have your own. I can’t say just how deep the MAGs get in this sequel, but so far, they seem to function much in the same way as the ones in the older Phantasy Star games, evolving based on items you feed them. There is also a personal room you are given that can be furnished and customized that has been brought back from Universe.

The hub ship is laid out in a very similar fashion to the original, which will make veterans feel right at home when they jump back in. On some level, it started to remind me of PlayStation Home, as in certain spots you can see videos running on televisions in the world. There were also lots of people forming flash dance mobs. Simply put, it was more awesome. There’s two floors that you’re free to run around and socialize in, with shops on the upper level, and other miscellaneous skill and quest NPCs on the bottom floor, as well as the entrance to the mission fields.

The controls all feel solid, and easy to use. There is controller support already implemented, though I opted to use the mouse and keyboard, which also worked extremely well. All combat is done with clicks of the mouse buttons, with movement on wasd, and shift as a weapon-type-specific action (such as blocking on melee weapons). Switching between auto and manual aiming is a simple one-button press, and 1 through 9 offer quick access to items.

Lastly, this game has one of the most detailed character creators I have used this side of APB. Not only are there sliders for everything — or in the case of breasts, a sizable box (!!!) — but there are modifiers to the sliders that let you emphasize even more specifics. It really makes me feel like I was creating a unique-looking character. 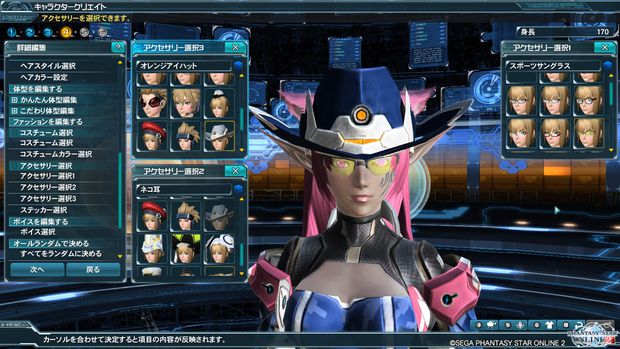 On the whole, Phantasy Star Online 2 has blown me away in a heartbeat. It shows a level of polish that I’ve only seen in maybe one or two other free-to-play games. As an MMORPG, it feels solid enough — with combat more engaging than the typical fare — that I think it will actually be able to hold its own in the wake of other big releases like The Secret World and Guild Wars 2.

Considering that the game is still in beta, that really speaks something drastic to me. I remember being sad when Sega announced their departure from store-based gaming, instead choosing to focus on the downloadable market. After my own experience with Phantasy Star Online 2, I say that perhaps Sega was on to something. If PSO2 is the mark of things to come from the company, then Sega should have a bright future in this new world of online gaming.