Released in arcades on March 1 here in Japan, Persona 4: Arena is a game I’m not sure anyone could have ever anticipated. Marrying the popular JRPG franchise with Arc System Works’ fighting game prowess, you’d be forgiven for thinking that this is nothing more than a money grab. One could argue that Atlus has been pushing Persona 4 a little bit too hard lately, what with the current anime series, Persona 4: The Golden, due for PlayStation Vita release in Japan this Summer and even a stage show in the works.

In reality however, Persona 4: Arena hits nearly all the right notes. 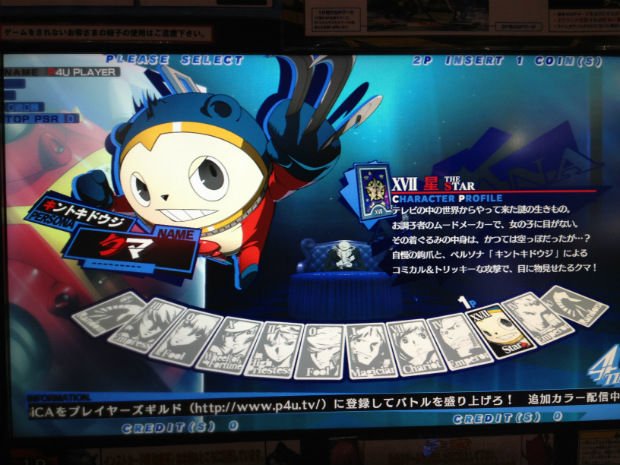 Known here in Japan as Persona 4: The Ultimate in Mayonaka Arena, Persona 4: Arena is an Arc System Works designed 2D fighting game that brings together Persona 3 and 4 characters for an all out flashy brawl that could make even Ultimate Marvel Vs Capcom 3 blush. For those of you unaware, Arc System Works is the developer behind both Guilty Gear and BlazBlue, two anime-styled games with a pretty big fan base. I for one am a big fan of both, so you can imagine my excitement when P4: A was announced.

Called to the TV world once again, Yu Narukami finds himself forced to battle his old friends from Inaba, one after the other. For some strange reason however, they don’t seem quite themselves. Teddie appears to be behind the strange event, but as things unfold it becomes clear that he’s an impostor. Defeating his friends one by one so that he can free them from their trance, Yu must once again make use of his Persona abilities. 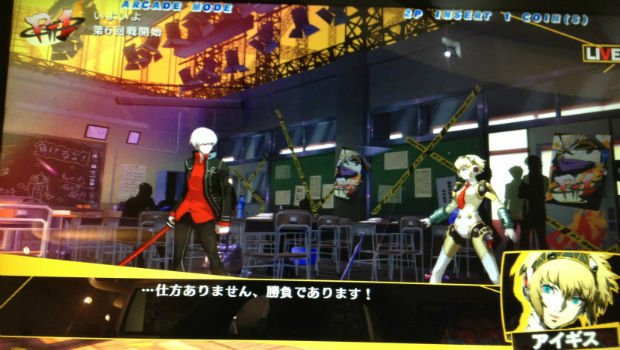 In the arcade version at least, the story is almost non-existent. As you fight each of your opponents, certain encounters will yield a brief dialogue scene that eludes to a more complex story-line, but the game intentionally dodges answering any of the serious questions it poses. Arc System Works has already made multiple statements about the amount of single-player content they plan on adding to the console release, so I’d expect an extensive story mode at the very least. In fact, according to the latest interview in Japanese gaming rag Gemaga, the development team admits that the story content in Persona 4: Arena trumps even BlazBlue‘s.

P4: A plays closer to Guilty Gear and BlazBlue than it does Street Fighter. You’re able to air dash, block in mid-air as well as execute throws. There is also a Burst meter which allows you to escape a combo by pressing any three buttons in tandem. Once your Burst is used however, you have to wait until the meter recharges before you can use it again. In that sense, the mechanic is a lot closer to what Guilty Gear players are used to.

The button layout might seem foreign to some. The buttons are A, B, C and D, which should come as a surprise to no one. Where things get tricky is that A is positioned directly above B, and C is above D. The A and B button are your basic physical attacks, light and heavy. The C and D button are used for summoning and manipulating your Persona. If you’ve played BlazBlue and ever tried Carl Clover or Relius Clover, the way you control their dolls is very similar to your Personas in P4: A. The biggest difference is that they only appear onscreen to attack, disappearing shortly after their animation is completed. 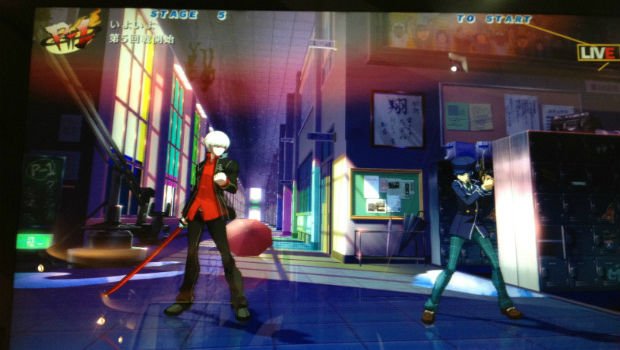 You can summon your Persona mid-combo to extend your attack chain, and they’re also useful when playing keep away. I made the mistake early on of simply not taking advantage of the mechanic, leading to several crushing defeats. After I started getting used to having a second controllable character onscreen though, I found myself improving. Your Persona is physical vulnerable once onscreen and can be hit by your opponent’s attacks.

At the top of the screen, just below the health bar, is a series of four cards. Every time your Persona is hit, one of these cards gets crossed out. When this happens four times, you lose the ability to summon it as well as being able to use your Burst for a brief period of time. This leaves you in an incredibly vulnerable situation as the C and D buttons essentially become useless until the cards recharge. Some players will be tempted to spam Persona attacks as their range and damage output are significantly better than normal physicals, but a good player will most certainly take advantage of their vulnerability.

One gameplay element that I’m still not too sure about is the use of the A button to automatically execute a combo. By pressing the A button multiple times, your character will use a basic combo on your opponent, finishing with a super attack if you have the meter to pull it off. This would appear to have been implemented to help novice players, but it’s also incredibly easy to read. I didn’t find myself using it much at all because the other arcade players would simply anticipate and counter appropriately every single time. Instant kills are also present here, only executable in the final round when you have a full meter. 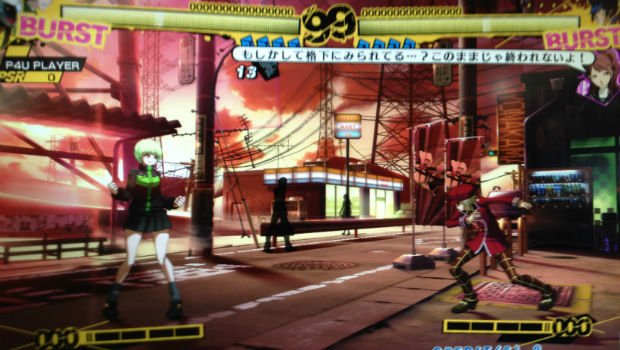 The arcade version of the game currently has ten playable characters, all of which have previously been revealed. The newcomer Labrys is not usable in the current version. You do however face her in combat as a boss character, giving a pretty good idea of what players can expect once she receives the appropriate nerfs. I don’t think the game ever states what the name of her final Persona is, but it’s likely this will be revealed in the full story mode. As is typical in any fighter, you can select from a variety of different colors for your team. In a neat twist the game gives the option to customize your Persona separate from your player character.

I spent most of my time playing with Yu Narukami and Chie Satonaka. Yu looks to be a solid character all around, with his own dragon punch, decent range and damage output. I can see a lot of early players picking him up to get used to the way P4: A plays. Chie on the other hand is a lot more nimble but does less damage. Her combo mix-ups are also a lot trickier to defend against, containing some difficult to read overheads and lows. To be honest, the ten hours I’ve spent with the game aren’t enough to be able to comment in detail about the different ways in which each character plays so take this info with a grain of salt.

I’m sure you can tell just by looking at the images in the gallery, but P4: A is quite the looker. The animation is about as solid as BlazBlue‘s and the CG backgrounds are beautiful. There are some amazing remixes of P4 themes in the game as well. Yu’s character theme, a remix of Reach out to the Truth, had me grooving to the beats while getting my ass kicked.

I can’t tell you if Persona 4: Arena is tournament worthy, or whether or not it’s going to really take off. It’s far too early to make those kinds of judgments as far as I’m concerned. What I can say with great confidence is that P4: A is a blast to play and a love letter to Persona 3 and 4 fans. It’s flashy, easy on the eyes and ears, fun to play, and controls like butter. When I was at the arcade shooting footage and taking pictures, the machines were filled with players despite it being the middle of the day. Everyone was having a great time and the atmosphere was charged and filled with enthusiasm. If that’s not a sign of success, I don’t know what is.