Locked up for a crime you did not commit, and accused of killing the empress you swore to protect, you are left to rot in prison for your unjust conviction. Your only saving grace is an amoral mystical being who endows you with special powers, allowing you to make your escape.

Upon emerging from the hellhole you’ve been caged in, you find the world outside enslaved by the totalitarian government that has seized power, and to make matters worse, there is a deadly plague spreading around your once beloved city. Yeah, I’d be pissed too.

Such is the plight of Corvo, a bodyguard-turned-supernatural assassin in Dishonored. Coming from the minds at Arkane Studios, there is a lot of talent behind this project. Key players from the development of such classics as Deus Ex, Thief: Deadly Shadows, and Half-Life 2 are just some of the hands on deck. You don’t have to be the greatest gaming buff to respect the pedigree brought to the table. 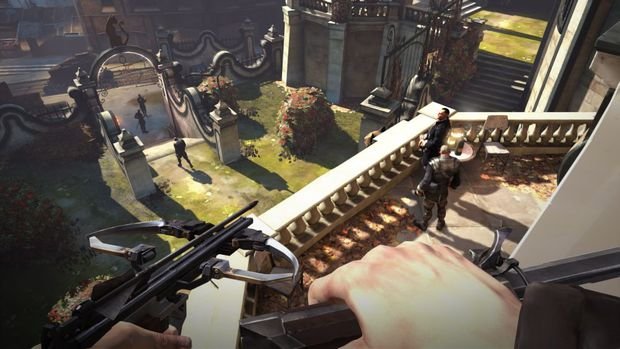 At its core, Dishonored is a first-person action game in the same vein as Thief and Deus Ex. There are a number of ways to approach given situations, leaving it up to the player’s imagination and creativity on how exactly to complete them. Sure, Corvo is a supernatural assassin, but if you prefer a pacifistic approach, the game is tailored to allow for that.

From the grunts to the story critical targets, Arkane claims to provide non-lethal options for dealing with all of them. To demonstrate this, the developers demoed the same mission twice from two extreme approaches. The first was very stealthy and quiet, while the second was balls-out loud and aggressive.

In our demo, Corvo has two members of parliament on his hit list, a pair of twins called the Pendleton brothers. The mission begins with Corvo on the roof of a building near his target’s location; this starting position for the mission isn’t random.

Outside of the main story, players will have plenty of opportunities to take on side missions and other peripheral activities. Depending on how many you complete, further options for how to approach your next story mission are unlocked. In this — and all missions — you can gain access to different starting points depending on your play style.

As Corvo makes his way down into the building (a brothel called The Golden Cat), we come across one of many runes. Runes are mystical objects that act as currency for upgrading powers. Though the world of Dishonored is very much steampunk, magic plays a huge role. There is a whole metaphysical and supernatural component present in the city of Dunwall, mostly personified by the Outsider.

An amoral being, the Outsider is neither a god nor devil character, just a being who recognizes important people in history and grants them a portion of his power to see what they will do with it. Having been visited by the Outsider while in prison, Corvo has supernatural abilities that allow him to teleport, freeze time, and posses living creatures. Apart from runes, you can also spec out Corvo with bone charms.

Bone charms are applied buffs that grant bonuses from extra weapon damage to increased effectiveness with certain powers. There are about 50 variations of bone charms, and though players can only initially equip two at once, towards the end of the game you can equip upwards of eight. 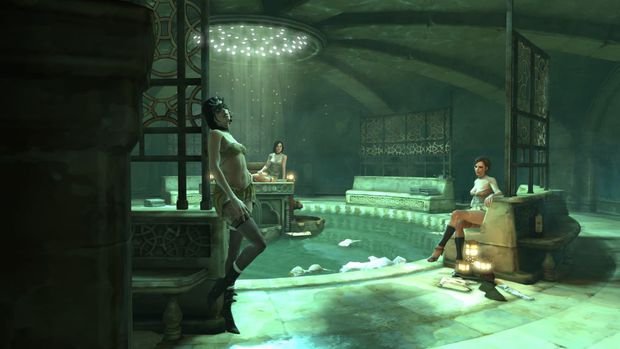 Being careful not to be seen, Corvo eavesdrops on a conversation between a few of the working girls. Apparently the younger Pendleton is in the steam room, located in the lower levels of the brothel. Through a nearby balcony, Corvo blinks down to a nearby river surrounding the building. Spotting a narrow entrance via a sewer system, Corvo posses a nearby fish, and swims into the compound.

Blink is essentially a teleport that allows Corvo to move across distances silently. Possession is just what it sounds like: you possess people and animals but only for a limited amount of time. Possession in Dishonored is full bodied as well, so your entire self goes into the target. You don’t leave your body behind when you take control of another. It’s a bit weird to think about, especially when you see a full-grown man basically implant himself in a fish, but hey, magic is just crazy like that.

Also note that you can’t abuse these powers for an easy victory. Powers in Dishonored are governed by a traditional mana system; although some of it will always regenerate so you have enough to blink once, you will have to carry a stock of potions and elixirs to keep your mana up for possessions and other higher-tier abilities.

Both abilities have great uses for stealth, but also work well in combat situations. Since the mission areas have a lot of verticality to them, Blink is particularly useful for navigation and in combat is a great way to make an escape or flank enemies. Possession perhaps leans much more to the stealth side as we didn’t really see it demonstrated in combat scenarios. While you can posses an animal at any time, human targets must be unaware of your presence if you want to take control of them. Furthermore, if a body that you are possessing dies, you go with it. 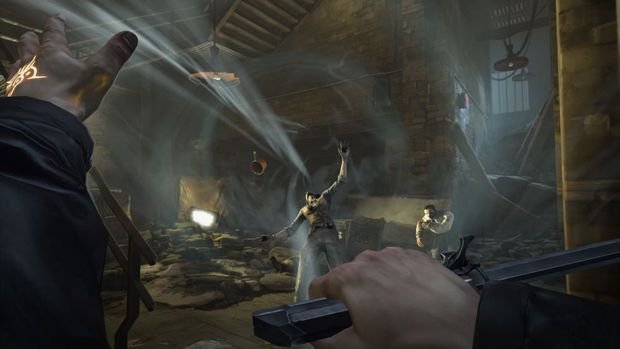 After swimming for a bit through the sewers, Corvo finds a clearing and leaves the fish’s body to continue on. Finally, we find the steam room where the first Pendleton brother is. There are just two guards standing in the way. Both are actually set up pretty well, so if we want to remain hidden, they both have to be taken out at the same time. It’s here we are introduced to the spring razor, a mine that sends razors, shrapnel, and other sharp objects flying when tripped.

While there is no crafting or weapon-building system in Dishonored, players can collect components that can be crafted for them in between missions. As soon as the first guard sets the spring razor off, we blink behind the second and stealth kill him. With nobody left between us and the target, we asses our options.

As previously stated, there are a number of ways to take out each contract. In this instance, we could simply walk in the steam room and shoot Pendleton, possess the brothel girl he’s with, and frame her — leaving her to deal with the consequences — or set up the scene to look like a murder suicide. For the less violent player though, there is the option to erase Pendleton’s identity and send him to work in the silver mine he has enslaved so many others in.

To take this moral high road, you will have had to come into this mission fully prepared, with all the related side quests done, and all of this mission’s alternate objectives completed. Rather than go for all those elaborate schemes, Corvo simply locks the door to the steam room, and blasts the steam way up, roasting both Pendleton and the brothel worker. Brutal, to say the least, but damned effective. 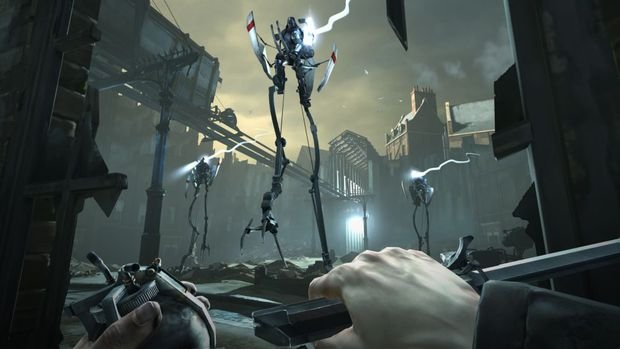 And with that, the stealth portion of our demo was up. We did get a look at the same mission, but with a much more aggressive play style. Even then, however, you will still have to slow yourself down at least long enough to learn your target’s location. These change dynamically with each playthrough of Dishonored, so it won’t do you much good to go on a rampage from the beginning.

Also, it seems that all the useful information you get from the game is gleamed from conversations you eavesdrop on. Maybe it’s just this mission, but if there is one fear I do have early on, it’s that eavesdropping will be as prevalent — and often boring — as it has been in the past action games. Anyone remember the first Assassins Creed?

While the first, stealth-heavy portion of Dishonored looked really cool, the totally aggressive nature of the second was considerably less interesting. While it is neat to see Corvo blink around enemies, getting quick kills and easy headshots, it had that same feeling of past stealth games, like the situation had devolved rather than evolved into something exciting. The whole demo was hands off, though, so we have yet to see how a brute force approach really plays out.

All told, there’s no denying that Dishonored is something to be excited for. This quick look at the game already has me anticipating a hands-on demo (please be at E3!), and it’s sitting high up with the likes of Borderlands 2 and Assassins Creed III for my most anticipated games of this year. With the talent behind the game, you’d do well to keep your eye on it too.