Like so many “older” gamers who grew up during the X-COM glory days of turn-based strategy almost 20 years ago, the folks at Parisian indie studio Brain Candy have been craving some good old TBS action. Not just any kind, because due to the formative effect of the age of Unreal Tournament and Counter-Strike, they wondered why there wasn’t a good multiplayer TBS game yet.

As it happened, they set out to create their own simultaneous turn-based strategy game to fill their niche: Fray. 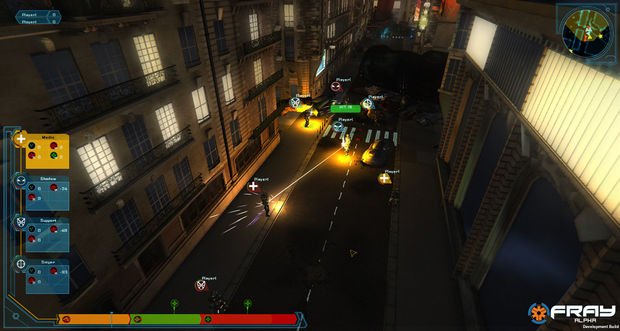 As Brain Candy admits, when you think “simultaneous turn-based strategy,” it’s hard to get around the Frozen Synapse comparison nowadays. Since they weren’t aware of another game in the genre being developed, the team’s development of their core ideas was never influenced by last year’s surprise strategy hit. Not that there is any ill will between Brain Candy and Mode 7. Far from it — they maintain a friendly relationship of cooperation as only indie studios with somewhat competing titles can.

Fray‘s focus is on taking the turn-based format and making it into a multiplayer game which marries the online playstyle you traditionally expect from first-person shooters. That means respawns and action points, deathmatch modes with simul-turn resolution, and class-based teams coupled with character customization. It sounds too crazy to actually work, but surprisingly enough, it does. 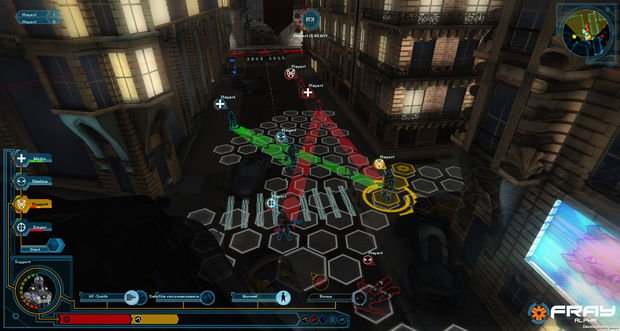 Fray is a top-down game in 3D, meaning you can zoom in a little and rotate the camera, but you’ll stick with a zoomed out view for battlefield clarity. While the game doesn’t show it, it is made up of hexagons to indicate how far you can move each turn. For the purpose of this preview, a round of deathmatch was played using an alpha build of the game.

After selecting four out of six available classes (Tank, Medic, Sniper, Support, Shadow, and Assault), each player’s team of unique units is randomly placed on a spawn point somewhere on the map. Each turn, a player has a limited amount of time to plan his actions. Each unit has a set amount of action points, indicated by a bar at the bottom of the screen, with which it can move, perform a special action, or shoot. You can move a certain amount of hexes, shoot targets within range of your weapon, etc. At the end of a turn, both players watch as their planned actions play out simultaneously in real time.

So far, that might sound very familiar to anyone who has played a simul-turn game before, but Fray adds enough to make it feel fresh. For starters, units can run out of ammo. As long as a unit is within a Support class’s area of effect, indicated by a circle if you hover over the unit, it will receive fresh ammo. A Tank is tough unit to get rid of in a combat situation, but it doesn’t just depend on health and armor alone. Any unit who is within a Tank’s area of effect will have some of the damage it receives diverted to the Tank. 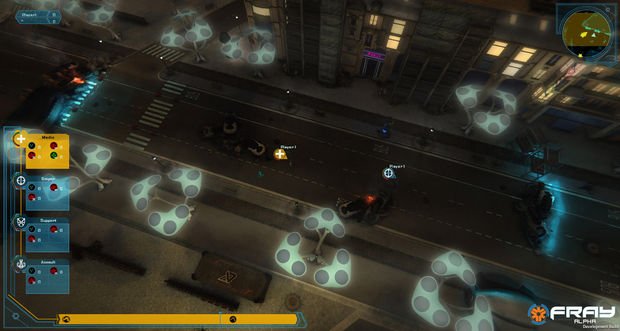 Medics heal with a medic gun (think Team Fortress 2) and can drop a healing turret on the battlefield, but only if that class is configured to have a healing turret as equipment. By configuring your classes, you can tailor your units to carry different weapons and equipment to fit your tactics. Using a piece of equipment, such as placing a turret, may cost you a few action points, but it’s always nice to have a turret dominating a section of the map.

Cover works by breaking line of sight, making it very hard for an enemy to hit you; the line of attack indicated by clicking on a target simply stops when it hits cover protecting an enemy. Different stances don’t serve as simple stand, crouch, and prone positions, but instead give you different bonuses depending on your class. Some classes might use a stance to move faster, while others can use an “attack move” stance to shoot at any target they encounter, without having to plan attacks in advance. Maps even offer bonuses you can pick up by moving over them, giving a unit a temporary stat increase, health, ammo, and the like — bonuses you will need if you opt not to include a class that provides healing and ammunition to your team.

As you can probably guess, it leads to a game of tactical movements and actions where you want to lure or push your opponent to move into pre-positioned lanes of fire, block off his escape, circle around to flank his support units, or play around with established military strategies. If a unit dies, you can choose to respawn it at certain spawn points on the map, which in turn means that any unit you kill in a deathmatch mode might end up harassing your rear a few turns later. 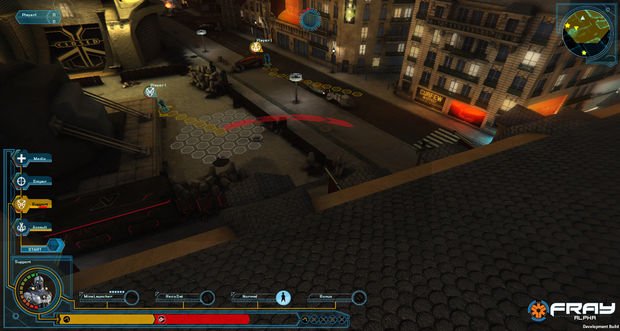 To protect the pacing in a multiplayer turn-based game, each turn has a default 90-second timer (this timer can be adjusted to shorter and longer settings) which makes planning turns fast-paced without feeling too rushed. There’s certainly a bit of a learning curve in the first few turns, as you experiment with your various classes, weapons, stances, and equipment, but anyone familiar with the genre should have no problem easing into it. Once you do, it can become a game of perfecting how you use your classes, and how to mess with your opponent’s head.

The relatively fast pace and the way combat is resolved makes it feel like your are the commander of a squad playing a round of team-based multiplayer in a shooter. It’s nothing like Natural Selection 2, but the type of play and tactics seen in both online shooters and top-down turn-based strategy games has certainly made a good transition to the format Fray is experimenting with.

If you hadn’t guess by now, Fray is a pure multiplayer game. Brain Candy would love to create a full single-player campaign, but the amount of options at your units’ disposal makes creating a proper AI very problematic and time-consuming for the small team. If you’re wondering how this is different than Frozen Synapse, it is because units’ action in that game revolves around only a few basic actions: walk, aim, crouch or stand, and fire — a small enough amount of permutations to be able to cope with when programming AI. Add in different weapon choices, equipment, and different stances per class, and you can get a picture of what you would have to deal with when creating a working AI for Fray. 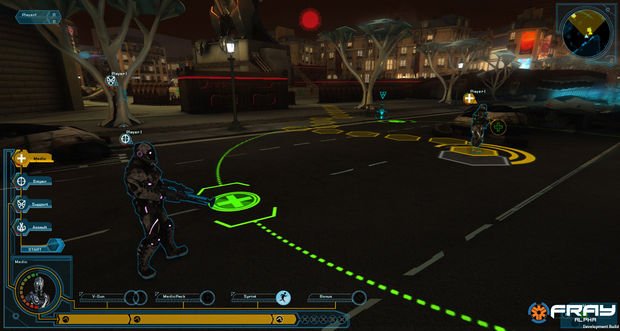 Besides deathmatch and team deathmatch, various other modes will be available in the full game when it launches. Players can choose a corporation to play as, which can yield XP bonuses depending on your corporation’s performance over a period of time (e.g., weekly bonuses for the top corporation). Leveling up units will also unlock new weapons and equipment, and different tactical bonuses can be gained by ending a turn quickly or by using a stance, for instance allowing you to move a little bit faster in the next turn.

One thing that struck me was how mod-able the maps are to suit different styles of play. Even on a map with an open environment and a few bits of cover, the difference between deathmatch, team deathmatch, and King of the Hill modes will easily affect how you play the game, and the potential for many modes and fans coming up with crazy ideas seems limitless. Currently, maps are spread across three “environments”; Paris, the typical cityscape with streets and urban trash to hide behind, a laboratory setting with corridors and gardens for more claustrophobic combat, and a Virtual Reality environment. Being a big fan of Frozen Synapse, it looks like Fray will have little trouble co-existing alongside it with its multiplayer focus and completely different styles of play.

Fray is in the last weeks of alpha at the moment, where early fans who pre-ordered the game have been helping out with development and bug tracking. A beta phase is planned to start in a few weeks, and players who end up buying the game after playing it in beta will keep their XP and stats. Like Mode 7’s darling, there will also be a “buy one, get one free” scheme to lure a friend into serving as XP fodder while you throw your head back and laugh maniacally.

[If you want to know more about Fray‘s development, take a look at Brain Candy’s posts on the Community Blogs!]