As we reported earlier, NBA 2K12’s cover athletes — yes, athletes — have been revealed, but I’m sure some fans aren’t sold yet. After all, we want some advancement in our games, right? Well, I was able to get my hands on NBA 2K12 and guess what? The game plays great.

The team that pulled out all the stops with last year’s bold, Jordan-themed game isn’t ready to just rest on their laurels. NBA 2K12 looks to capture the authenticity of the NBA by adding a plethora of gameplay improvements that help keep the player feeling immersed in the game while simultaneously ramping up the attention to detail in order to properly recreate NBA atmosphere.

The idea behind this year’s iteration of the franchise was to make a gameplay jump commensurate to that made between NBA 2K10 and NBA2K11 and it shows. For example, the post game was completely redesigned in last year’s game, yet the team felt the need to go back to the drawing board and shake things up once more. Now, pressing Y (or triangle) in the post is used for activating the post game, freeing up both triggers and the right stick. This opens up the post game entirely compared to last year’s game, as every single move in the game’s impressive arsenal suddenly becomes available to players in the post.

This newfound freedom effectively captures one of the leading tenets of NBA 2K12, which is making sure the gamer is the one scripting the actions and flow of a game, not canned animations. Accordingly, from the start of a shot, you will have control over what your player does. This includes things like switching hands in the air while attempting a layup and even deciding to kick out a pass right after committing to taking a shot. It’s all about putting control in the player’s hands.

The game’s AI has also seen a lot of tweaking. For example, the same zone defense scheme that the Dallas Mavericks used to best the Heat now plays much more smartly. One of the complaints about defensive players in last year’s game was their Spidey Sense-like ability to reach and arm out and deflect a pass without even looking. The team admitted that it was a band-aid meant to discourage players from running their player down court before their team was going to get a rebound and then having the rebounder pass the ball to the now-wide-open man down court. In NBA 2K12, issues like that have had time to be addressed much more thoroughly. 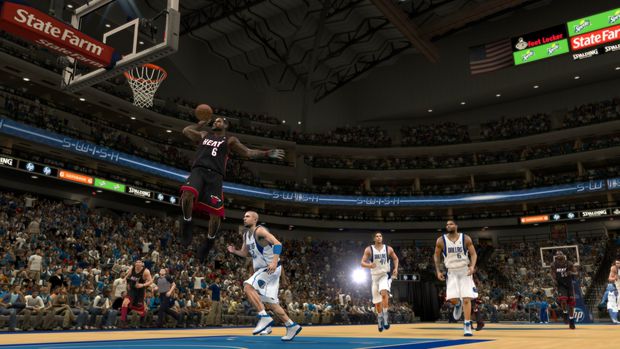 The AI system has been completely rewritten to be more dynamic. In last year’s game, the AI would run specific plays, which could often lead to the player figuring out the plays and making the appropriate jumps on the ball over and over. Worse still, when the AI had its play snuffed out, they would default to a generic brand of basketball intelligence, defaulting to simple plays. The new system is now much more divergent, giving the AI more options if their primary options aren’t available. This keeps the players on their feet and makes the AI more of a challenge as well as more like a human opponent, which should do well to extend the life of the game.

I got to play as the NBA Champion Dallas Mavericks in the latest build of NBA 2K12 and played against the same Miami Heat team Dallas trumped in the NBA Finals earlier this year. Given my brief experience with NBA 2K11 going in, I was surprised by how quickly I was able to notice some of the gameplay changes made in NBA 2K12.

One of the things that stood out to me most during the game is the new physics engine, which handles all forms of contact, and reacts according to the situation. For example, shorter players will have a much tougher time out rebounding bigs, and player on player contact differs depending on whether the contact takes place in the air or on the ground. The other notable impact of this system is the newly implemented live ball physics. In last year’s game, the ball didn’t seem to go live often, and most players could keep a handle on it fairly easily. In 2K12, the ball can make contact with anything and react accordingly, leading to a lot more intense scrambles for possession.

The live ball physics forced me to watch my play style immediately because no longer could I make contact with people without paying careful attention to the ball. I lost handle of the ball a lot early on because I would be running down the court and I would basically dribble it off my own teammate inattentively — something the game rarely accounted for in last year’s game. Not only did it help make me feel like I was playing a more accurate brand of basketball, but I got to experience some of those aforementioned intense scrambles for possession and they were exciting. 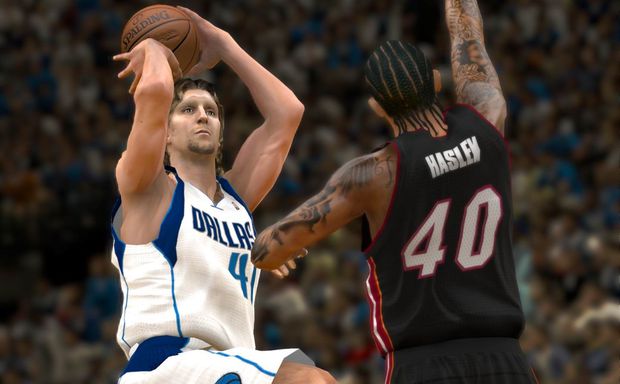 A lot of other subtle touches have been made that won’t be lost on fans of last year’s game. The entire first row of the crowd is now live. That is, it’s fully possible to interact with them; for example, diving into the first row while trying to keep the ball in bounds or having a lunging defensive player’s momentum take him over the scorer’s table. The facial animations and character models have all seen tweaks in the name of authentic player representation and the team was particularly happy with white players finally having a more realistic looking skin tone.

I was also pleasantly surprised to see a letter rating system (F, B+, etc.) pop up after taking shots. A high letter grade doesn’t always ensure a made bucket, nor does a low letter preclude a possible bucket, but the system rates both how well you took the shot and the quality of the shot itself. It would take into consideration if you were well defended or didn’t have your feet set. It’s a nice bit of immediate, tangible feedback that feels like it can be used to adjust your game accordingly. Speaking of adjusting your game, it also has a feature allowing you to adjust your play style on the fly, bypassing menus and keeping you in the action. With the system, you’ll be able to assign specific players a specific role, or quickly swap between playing philosophies (lock down the paint, pressure shooters, etc.), whether it’s just for the present play or for the rest of the game.

Thankfully, one of my few complaints with last year’s game has also been addressed. Refs no longer hold onto the ball for an inordinate amount of time when the player is taking the ball out or shooting free throws, which livens up the game’s pace by removing those occasional, jarring stops in the action where the player would mash the A button and scream at the ref to give them the damn ball.

A combination of reworked AI and an advancing physics engine actually made NBA 2K12 feel more fluid to me than last year’s game, despite 2K12 being so far out from release. If you’re a basketball fan, I think the only question left might just be “Which cover am I getting?”