The strategy games published by Paradox Interactive are usually not the most accessible kind found on PC, but Turbo Tape Games’ Naval War: Arctic Circle is attempting to make a hardcore naval-strategy sim set in a future Arctic conflict zone easy enough to understand for people without a Paradox PhD.

I took a look at the upcoming real-time strategy game at gamescom and it seems like a game that fans of naval warfare games will be able to enjoy without having to traverse menus filled with statistics.

The ocean floor below the Arctic circle is rich in natural resources, which has already raised tensions between regional powers who all place a claim on them as rising temperatures are making exploitation more feasible. Naval War: Arctic Circle explores the possibility of warfare in this region with the United States, the Russian Federation, the Nordic countries and NATO.

The game is played using a top-down strategic map with symbolic representations of naval vessels, aircraft, and bases littering the battlefield. Clicking a unit displays it in a smaller screen in the bottom control area of the screen and allows you to see what it is doing. For a better look, you can swap the map and the 3D view of the action around between the main and the bottom screens.

Since this is a hardcore RTS, you’ll have to maneuver your units carefully. Every unit has sensors that face in different directions depending on the unit, which are used to scan for unidentified vessels or aircraft in the area. If you use a submarine’s front-facing sensors to hunt for enemy vessels, for instance, you might find a small convoy of unidentified ships but you won’t know if they are friends or foes. For a full identification you can send, say, a couple of jets or helicopters from an aircraft carrier or nearby base to take a closer look. 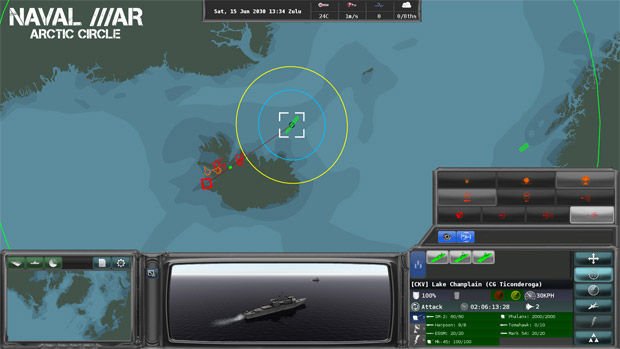 Everything is done in real time, which moves pretty slowly. Identifying a small group of vessels as enemy cruisers might make them an easy target for a submarine at long range, but if you fire some torpedoes at them it can take a couple of minutes before they reach their target. You can click on the torpedoes to see them slicing their path through the water in the lower screen, but if you don’t want to wait you can change the game speed to see the results a bit faster.

If you want to micromanage every single unit movement on the map, you can. But if you want to take a slightly more casual approach — as far as that’s possible in a game like this — there are some features that help you along the way.

Instead of deep menus for everything, you can quickly and relatively easily click on what kind of sensors you want to activate at the risk of being detected, move your units, or managing attack options using easy to understand buttons.

Once units that are in a combat engagement have resolved their real-time conflict, you’ll also get a log that displays statistics for damage, kills, etc. It helps to give to the player some more tangible feedback on what they are doing, which someone like me who tends to play easier games along the lines of the Battlestations series will greatly appreciate. 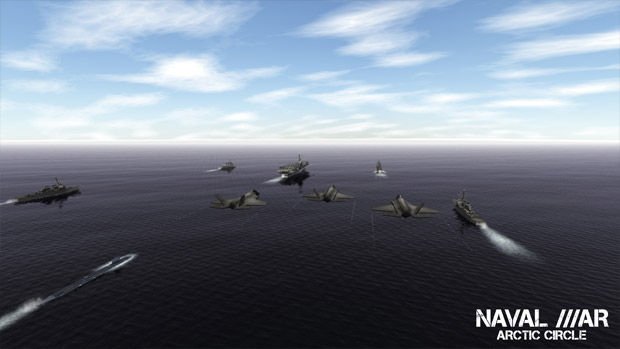 These more accessible functions will probably help some more novice players along to get the hang of all the intricacies of modern naval combat, but the hardcore can still eat their hearts out because Turbo Tape Games isn’t holding back on the realism either. While their philosophy is that fun gameplay is more important than extreme realism, this kind of game allows you to stay pretty close to both aspects without sacrificing too much.

Naturally, there are a million real-world ships, submarines, aircraft, and weapons to fill your heart’s content. Two campaigns set in different regions of the Arctic circle will let you use all of it to fight out fictional wars grounded in reality, which may be a breath of fresh air for people exiting the theater after they’ve just seen the upcoming Battleship movie.

Naval War: Arctic Circle is still a pretty damn hardcore-looking title for those looking for a game like this, but if you have a passing interest in these kind of warfare scenarios that don’t take place on land for a chance, then it wouldn’t be a bad idea to keep an eye on this game since it looked easy enough to get the hang. If you don’t fall in either category, this will still be a fascinating game to watch people play in multiplayer.