Off-road racing is a potentially dangerous endeavor. Hell, we nearly lost our own Hamza Aziz to an ATV accident last year — but, shark that he is, he merely brushed off the crash and continued onward in the name of Destructoid. That’s our Hamza!

Luckily, I didn’t have to perform any death-defying ATV jumps to get my hands on THQ’s upcoming off-road racing hybrid, MX vs. ATV Reflex. It’s the fourth iteration of the well-known MX vs. ATV series, so what has developer Rainbow Studios done to try and mix things up? Hit the jump to find out just why the word “reflex” is part of the game’s title.

It seems that as the years go by, more and more games have turned to the analog sticks for functions that, a console generation or two ago, were mapped to buttons. In most cases, this change has been for the better, offering gamers a higher degree of control. MX vs. ATV Reflex changes up the franchise’s long-stagnant controls by introducing Rider Reflex, which provides a much more logical and natural control scheme. As usual, the right trigger and left trigger are the gas and brake, respectively, and steering is controlled by the left stick. But the right stick gives you complete control over your rider’s body, so it can be controlled independently of your vehicle.

Rider Reflex allows you to take tighter corners, jump higher, and avoid crashes. With the right stick, you can shift your rider’s weight to lean left or right, which makes a huge difference in how sharp a turn is. And while preloading jumps used to be controlled by holding down a button, you now pull the stick down on the way up a ramp and flick upward to launch yourself into the air. It’s a much more intuitive and fluid control scheme, and it really makes you wonder why this hasn’t been implemented before. There’s no going back from this — from here on, it should be the standard control scheme for these kinds of games. 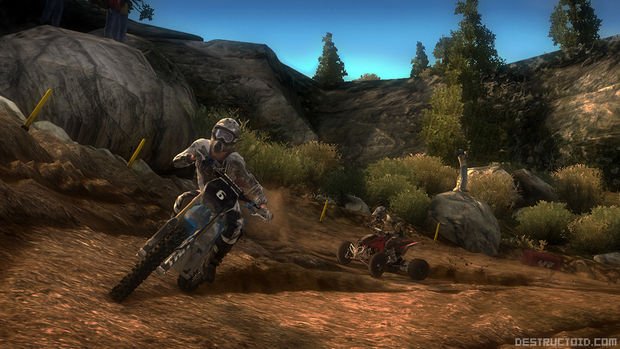 Wreck Avoidance is another new feature that utilizes the right analog stick. If you’ve taken a jump at a poor angle, and are close to crashing spectacularly, a green arrow will flash for a second on the screen. Should you manage to flick the right stick in the appropriate direction in time, you’ll be magically saved from wrecking. But there’s even more that the right stick does in MX vs. ATV Reflex. This time around, tricks have been mapped to it. (Perhaps RS stands for “Renaissance stick” instead of “right stick,” eh?)

To perform a trick, you hold the left bumper (or L1 on the PS3) in the air — this tells the game that you want to use the right stick for tricks instead of leaning. From there, you can do all kinds of things with the right stick to do different tricks. Merely flicking in a direction will perform simple ones, but the game incorporates more complex movements like quarter- and half-circles to offer over 70 different tricks in all.

The third major new feature that Rainbow is touting is the game’s real-time terrain deformation. That might sound like a mere marketing term, but the developers don’t just mean that your wheels will leave tracks in the dirt. They will, and the significance of that goes beyond the visuals — it has an actual physical effect. Just like a real race, you’ll want to either follow the already-created rut of a rider ahead of you, or create your own. It’ll be slow going if you try to drive over a bunch of ruts, since your vehicle will be bobbing up and down. And the tracks that are created by each vehicle in a race don’t go away — in fact, the complexion of a race will change from lap to lap as the race progresses and the track gets more and more torn up by the treads of the vehicles on it. 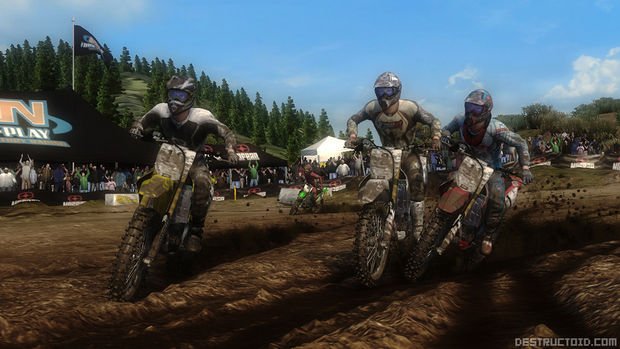 Rainbow claims that this has never been done before in any other racing game, and while we’re not entirely sure that that’s accurate, it’s still pretty awesome that you’ll have to change your tactics and adapt on the fly to the road conditions. If you’re driving through some particularly sticky mud for a few laps, you might eventually see the underlying puddle of water; the mud covering a ramp will erode over time as more bikes and ATVs jump off of it. Even your body can affect the landscape — say, if you fly off your mount and skid along the track.

Visually, there are high points and … not-so-high points. I saw some impressive fog and water effects, and the terrain deformation, as I explained, was uniformly spectacular-looking. But when I was placed in a snowy, mountainous area to roam freely, I couldn’t help but notice that it was rather sparse (though this may have just been because the space was created for the demo). Still, even in a race with a number of other vehicles, the game didn’t seem to have as many visual bells and whistles, so to speak, as a series like MotorStorm (and in the off-road genre, comparisons to Evolution Studios’ PS3 racers are inevitable). 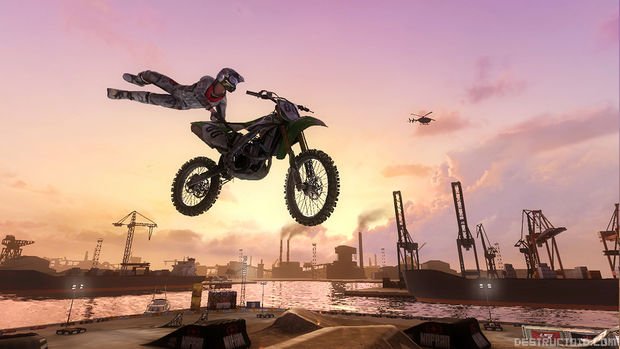 That was really the only semi-negative thing I can say about what I saw. The mechanics of MX vs. ATV Reflex are undeniably solid, so if Rainbow can take the graphics up a notch, they very well may have a winner on their hands this holiday season. Check out the game’s Web site for more details.