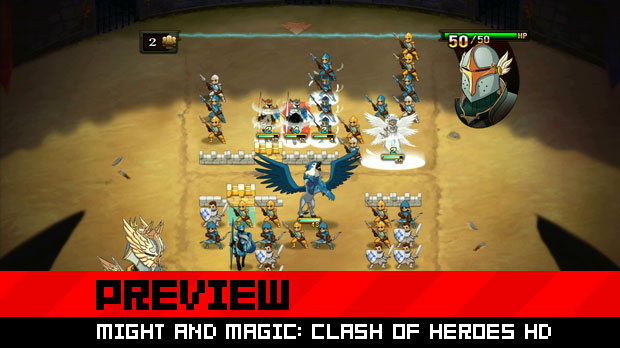 If you haven’t played Might & Magic: Clash of Heroes, the Capybara Games-developed and Ubisoft-published Nintendo DS game quietly released in late 2009, then shame on you. Clash of Heroes mixed puzzle game elements with tactical gameplay, and threw in more than a smidgen of role-playing goodness. The result was one of the most original and addictive titles on Nintendo’s handheld.

So again, if you missed out, shame on you. But Capybara is giving you a chance to make up for your misdeed, as it’s releasing a high definition version of the game for Xbox Live Arcade and PlayStation Network this April. I’ve got my hands on the game a few weeks early, and it’s official: this new version appears to be just as good, if not better, than it was on Nintendo’s handheld. 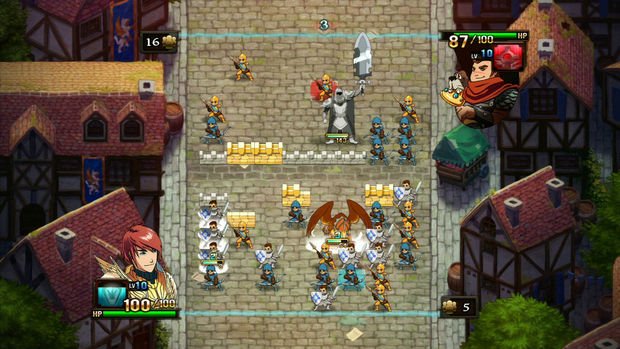 Clash of Heroes borrows certain game elements from all over the map — including turn-based strategy and traditional role-playing games — but its combat system is at the core of what makes it so special. It’s also closely related, gameplay wise, to one of Capybara’s other titles, the iOS and PlayStation Network puzzler Critter Crunch. The game’s turn-based battles take place on two separate grids, with the player’s on the bottom, the enemies up above. Units are moved and stacked to create various offensive or defensive formations. The mechanic is probably most easily relayed to many gamers as “like Magical Drop”; it’s all about pulling units off of one line, and dumping them on similar units (in both class and color) to create the game’s various formations.

No matter how I’ll describe it, it’ll sound more complicated than it actually is in practice, so you’re better offer just seeing for yourself:

Depending on what character you’re currently using, you’ll have access to various types of troops; this includes what types of “Elite” and “Champion” units you’ll have access to. While the most basic units require matches in lines of three, these powerful units will require you to mix them with the smaller core troops of the same color. “Elite” units will require two standard units be stacked behind it; “Champions” require two rows of two smaller units as support.

The basic gameplay of Clash of Heroes is simple enough to grasp after a few battles, but it’s how you’ll learn to use those skills effectively that’s difficult to master. That keen eye you might have for playing puzzle games will certainly come in handy, but that has to go hand-in-hand with careful strategy and planning if you want to consistently succeed.

Everything that made the DS game such a joy to play has been translated into this new high definition version, including the game’s surprisingly sharply written and enjoyable campaign. Clash of Heroes has also been given the obvious visual overhaul for high definition screens, including all new art work. The DS game was no visual slouch — Capybara obviously holds sprite-based visuals in high esteem, and it showed — but this update looks gorgeous on the big screen, with incredibly vivid colors and smooth animations. 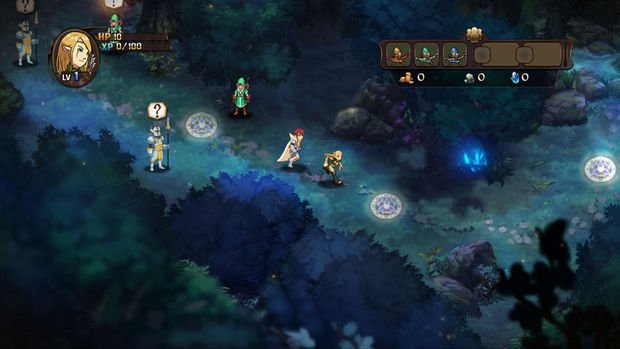 If you’ve played the DS version until your thumbs were sore, note that it’s not just the visual update that you should be looking forward to. Capybara has done a fair bit of tweaking in other areas as well. From the big (like new artifacts and creature abilities) to the small (the ability to see unit stats in battle, for example), there really seems to be enough here to warrant another go with Clash of Heroes.

A big plus of shifting to console for Clash of Heroes is a bigger focus on the game’s multiplayer. While it was supported in the Nintendo DS version, I’m positive it’ll get a lot more attention thanks to the ability to play either online multiplayer or off with widescreen retail estate. Players can choose from a number of heroes, each with his or her own unique skills and units to choose from. The gameplay from the single-player campaign is left intact, which lends itself to some incredibly tense head-to-head competitions with human players. Also new is a two-vs-two mode, where two-player teams cooperatively work to best their opponents. While I haven’t had a chance to try it out or see it in action, the potential there has me foaming at the mouth.

Might & Magic: Clash of Heroes is out this April for Xbox Live Arcade and PlayStation Network. I’m giving you a “Get out of Jail Free Card” on missing it for the Nintendo DS. Just make sure it doesn’t happen again.