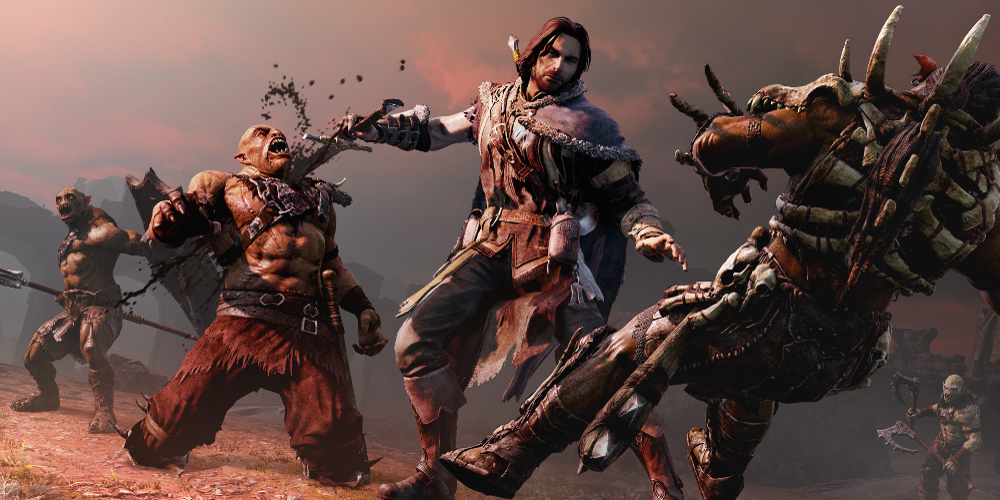 Whenever games tied to a major license are announced, there’s usually a collective grumble from fans. Titles based on movies, television, or comics usually don’t end up well, as most of the time they’re developing with the focus on the brand as opposed to the game itself. With the announcement of Middle-earth: Shadow of Mordor back in November, many fans were taken aback by its seemingly loose interpretation of J.R.R. Tolkien’s fiction.

But of course, you can chalk this up to pre-emptive nervousness considering the franchise’s history in gaming. Which is totally understandable. But things now appear to be different, and this new sandbox action title from Monolith — the developers of F.E.A.R, No One Lives Forever, and Condemned — plans to take a fresh approach to making a game with Tolkien’s lore.

During a private presentation of the game, Destructoid got the chance to check out a lengthy look at the game that represents a vertical slice of what the developers at Monolith have planned for their next foray into Middle-earth.

The developers at Monolith weren’t shy to talk about the reputation of movie games, and they were clear to share what their influences were, in particular Batman: Arkham Asylum. In terms of production, the Batman series served as motivation during the development of Middle-earth. “We saw Batman: Arkham City as the model,” said director of design Michael De Plater, while discussing influences. “We looked at that game as the way to make licensed properties. It’s best to make the best game you can first, before trying to make good movie game.”

Set between the events of The Hobbit and The Lord of the Rings, players take on the role of Talion. As a ranger for the kingdom of Gondor, Talion was a guard for the black gates on the eastern side of Mordor — but on a night like any other, a massive army of Orcs siding with Sauron invaded. Killing many of his allies and loved ones, he is left for dead by the orcs. Unexpectedly, Talion is saved from death by the spirit of a Wraith and given new life and along with new powers. From here, our hero makes his way into Mordor to seek revenge, learn why the Wraith saved his life, and discover what the forces of Sauron have planned.

Of course, this story may raise some eyebrows among loyal Tolkien fans. It’s somewhat of a departure from the lore, and plans to stick more to the film’s style, but the developers at Monolith are confident that fans will enjoy the narrative, as it’s one of the bigger focuses of Middle-earth. The lead writer of Shadow of Mordor is Christian Cantamessa, who was also the lead writer of Red Dead Redemption, and he’s placed a lot attention on fleshing out Talion and making sure it’s in keeping with Tolkien’s lore.

As an open-ended sandbox action game, players will be able explore Mordor as it was before the return of Sauron. In fiction, Mordor was mostly known as a volcanic wasteland, but Middle-earth plans to show off areas that were filled with wildlife and flora untouched by the volcanic ash of Mt. Doom. Players can even interact and use items and animals from the game world for scouting and combat purposes. Large trees and bushes allow for cover during stealth, and utilizing bait can manipulate aggressive animals against the orcs.

As a ranger, Talion possesses abilities that suit him for mobility, and melee and ranged combat. Batman: Arkham Asylum was a key influence and the developers took notes from the design of its action and traversal. Combat utilizes a similar free-flow fighting system from the Arkham series; specifically where players can freely move between individual enemies in a group and maintain combos to unlock special moves and power ups.

To take things further, Talion has access to a series of new abilities while in his Wraith form. In this phase, he can enter the Wraith realm (in similar fashion to how Bilbo Baggins uses the One Ring) and observe enemies and points of interest in the game world. Moreover, he also moves much quicker and possesses enhanced archery and combat skills while in Wraith form. When engaging enemies, Talion can switch in and out of his Wraith form to expose weaknesses in enemies and pull off quick shots with his bow and arrow.

As expected in a sandbox game, exploring and taking on new challenges will lead to great rewards, such as experience points and journal logs detailing more of the story and history of Mordor. Talion can also acquire ability points through leveling up which can be spent on unique skill trees for his Ranger and Wraith abilities. At the beginning, players will find the offerings somewhat bare, but eventually when you gain new moves and skills, such as a teleport attack called Shadow Strike, Talion becomes a force to be reckoned with.

In order for our main character to exact his revenge on Sauron’s army, players must create chaos in Mordor to undermine the influences of the orcs in the various zones. This is accomplished by strategically battling through the hierarchy of command by taking out enemy strongholds and camps, to draw out Sauron’s Lieutenants to cripple their forces.

Of course to do this, players must start at the bottom. In each zone of Mordor, there are a number of captains and war chiefs to combat with, and even pit against each other.  During our presentation, we saw Talion stalking an Orc captain by the name of Ratbag the Meathoarder. Starting with the stealthy approach, Talion takes out various orc soldiers utilizing both ranger and wraith abilities before breaking out into a full-on brawl with the entire camp. Realizing he’s outmatched, Ratbag makes a run for it, but is captured when Talion uses a Wraith arrow to immobilize him.

From here, players can approach the captain and interrogate him to gain Intel about the other officers in the zone. In a surprising twist, Talion can utilize his wraith abilities to take control of weak-willed captains and use them as temporary pawns in his struggle against the armies of Mordor. The player can assign tasks such as spying on other unknown officers, or assassinating other captains and war chiefs. Using his Wraith form, Talion marks Ratbag as a temporary ally and assigns him a mission to assassinate a war chief by the name of Orthog the Troll Slayer. This decision will create a brand new mission within the zone, which players can choose to accomplish at their leisure.

Skipping ahead, we start the assassination mission and see that Ratbag is the second in command to Orthog. Moreover, the captain-turned-pawn has his own band of orcs at his side which will allow for Talion to gain the upper hand against Orthog, but also have a group of orcs fighting by his side under Ratbag’s leadership.

Surprisingly, the central enemies within Sauron’s army are all procedurally generated by the game. Known as the Nemesis system, Middle-earth aims to create a greater level personality and uniqueness for each playthrough. The orc characters seen in the presentation will likely be entirely different for players. Since these characters are randomized, their knowledge and fighting abilities will be completely different for each player and for every repeated playthrough of the game.

Everything from the names, fighting style, roles in Mordor, and their personality will be different for each player, according to Monolith. “We put a lot of effort into actually letting players make their own personal and unique bosses and villains in a living world, that was a big focus for us,” De Plater said of the Nemesis system.

These are not just for cosmetic purposes, but by design for strategic gameplay. During key moments in battle, Talion can acquire Intel from captains, such as strengths and weaknesses about other officers in Sauron’s army. How deep their knowledge goes largely depends on the procedural element of the game’s engine. One captain may have a deep knowledge of others in the zone, while another may be largely ignorant of who’s who.

The experience of death leaves a lasting impression on the game world and the morale among the forces of Sauron. Even the lowliest of grunts have potential to become a serious threat to Talion. When Talion is killed in battle, the Orc who lands the killing blow will be promoted in rank and added to the list of officers that Talion will need to take out. Even the lowliest of minions can kill Talion, and their promotion will create a new challenge for players. When revived at the various Forge Towers across the zones, they’ll see that their death has motivated forces of Sauron, which will make creating chaos a bit more challenging.

Moreover, enemies that escape from Talion during combat will live to see another day and alter their tactics for when players encounter them again. This creates another layer of challenge that emphasizes strategy. Some battles may not be worth running blade first into and will only result in player’s death and a new captain or war chief to eliminate.

Even in this fairly short showing of the game, it’s clear that the content in Shadow of Mordor is massive; and the developers plan to support players who may feel a bit lost. Warner Bros. Games and Wikia plan to release a companion app for tablets called Palantir. In real time, players can have the app on standby and learn details on the lore, locations, central characters, and other details while playing the main game. Though it’s not really necessary for the game, it’s a neat little app to have, if you’re curious about any references or characters in Tolkien’s lore.

This title is quite the departure for Monolith games, as it’s their first sandbox action game. This presentation of the vertical slice for Middle-earth: Shadow of Mordor was pretty impressive, and shows the ambitious nature of the game.

I left quite impressed with what Monolith has got in store for Middle-earth. The Nemesis system in particular is an inspired idea that will definitely incentivize players yearning for a deep single-player experience to revisit. While it’s still a ways off, and showed a number of graphical quirks and glitches that need to be cleared up, it’s gotten me interested in what’s in store.