The MechWarrior property is an oldie. Perhaps even unrecognizable to some, as there hasn’t been a proper entry in like ten years; I know it in name and concept only, having seen box art or occasional screens. Accordingly, I was not quite prepared for what I was getting myself into with MechWarrior Online.

These robots are decidedly measured and deliberate in their actions. I’m used to fleetfooted, humanoid mechs the likes of Gundam, Evangelion, Gurren Lagann; anime, in short. MechWarrior’s machines are much more like frighteningly advanced tanks and you feel like the operator, heightened by the in cockpit view, in what is much more of a simulation experience than a crazy robot shoot-‘em-up. These death machines feels like the sort of thing you would oppress a people with. 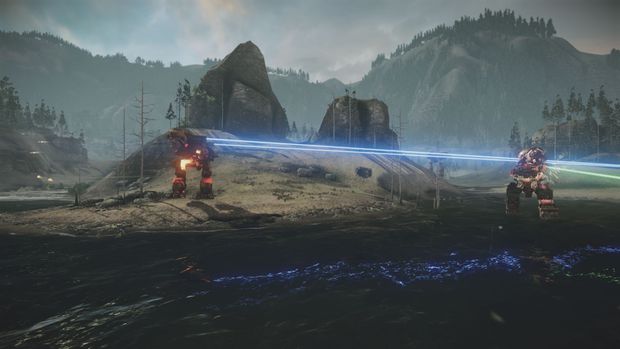 More and more titles are embracing the free-to-play market and MechWarrior Online is among them. With recent, praised releases like Blacklight Retribution and Tribes: Ascend, as well as the upcoming, mech-based Hawken, visual fidelity up to current standards is basically expected of Western free-to-play games. As such, MWO boasts some high-fidelity visuals and DirectX11 support. That being said, the art direction largely leans towards a dank and war-torn direction.

The levels I played felt rather similar, despite changes in color tone. There was a snow-blindingly white locale, a rainy, mountainous evening, a level with a sickening greenish industrial flair and smoke stacks, a washed out, crumbling urban environment, and so on. Everything feels quite desolate and the levels are mostly open outdoor environments — these battle mechs need room to strut their stuff — so there is an air of familiarity about them, despite the changes in terrain and lighting.

However, I’m sure these subtle stage differences are going to be important factors to consider for someone who knows the game well and isn’t in their equivalent of a first day behind the wheel. The devil’s in the details and there are details here for days, to the point of intimidation. It’s not the most accessible title around. It took me a while just to get acclimated to the vehicular piloting of the mechs and it wasn’t until I was just about ready to call it a night that I claimed my first victim. Giants robots are hard to destroy, even if you have your own giant robot. Who would’ve thunk it? 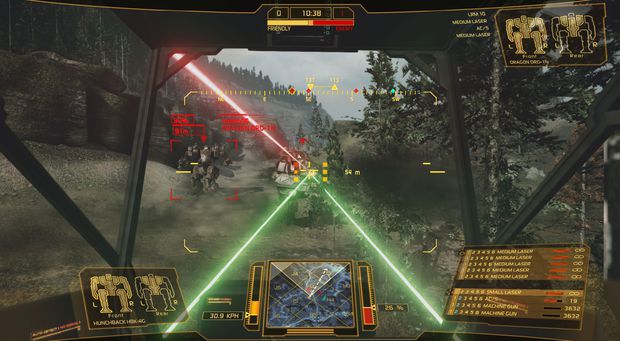 For the uninitiated, as I was, down (s) and up (w) control your throttle forward and backward, setting your mech to a constant speed. Right (d) and left (a) point the mech in the direction you want it heading, while your pilot looks around freely relative to where your mouse is pointing, though you can no longer look around a full 360 degrees (at least not in the ones I used) like an inquisitive owl. Otherwise, the scheme is familiar. Click the mouse to fire your lasers (or, sometimes, other weapons), space to jump for mechs outfitted with such an ability, and so on. Oh, and a super neat controller is in the works, too, though I didn’t get to use it. Simulation!

These lumbering hulks can absorb a lot of punishment and your lasers overheat with quickness when overused, which causes a temporary system-wide shutdown, leaving you vulnerable. Again, it’s a slow-moving affair. Teamwork, restraint and thoughtful piloting seemed imperative, giving confrontations a dogfight sort of volley as you trade strangely whimsical red and green pew pews of laser. Mechs are armored differently and will take a lot of damage to different portions before finally sustaining critical damage, rendering you a scrap heap for the remainder of the present match.

In addition to the combat, there is an extensive warehouse for playing robot dress up, as well as selecting pilot perks. BattleMechs can be outfitted with different armor, weapons and color schemes. Also in this depot, you can choose between your available battle bots, which come in light, medium and heavy varieties. During my hands-on time, there were about a dozen available, all of which had dull names like HBK-46 or the slightly more colorful Ranger, instead of cool ones like Deathscythe, but I guess you can’t fault them for that. These are heavily industrialized, realistic death machines, after all. 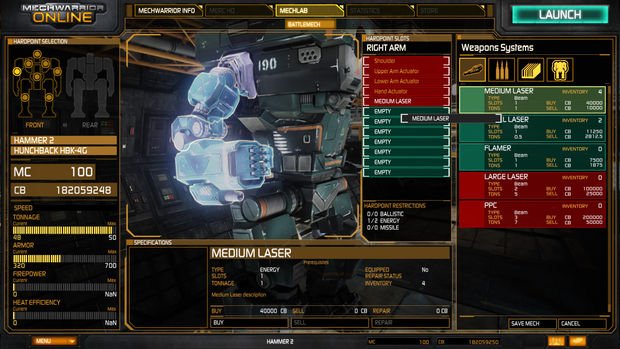 Once you begin to swap out parts, the possibilities are rather staggering. Each individual piece — head, torso, arms, legs — has applicable weapons or armor to change and more still to buy. It remains to be seen how viable all of the possible builds will be, but, for the time being, they’re possible, and should work towards giving your mechano-man a distinct feel that conforms to your play style. Equally up in the air is how purchasable content, like parts, will affect stat differences, or how viable a completely (real-world) purchase-free build will be; balance, in short.

I’m quite interested to see how the well traveled MechWarrior property adapts to this free-to-play model, especially with sexy up and comer Hawken right on its tail. There’s definitely a learning curve to it, which could keep new players from investing the time it takes to learn its nuanced, restrained combat, without the impetus of making the most use of their money spent.

Given its niche, the steady influx of newbies could also frustrate those who are deeply invested in its sim-like style, upsetting match balance. In the mean time, you can head over to the MechWarrior Online site to reserve your pilot name, lest some cretin swoop in and filch your moniker.