The somewhat barren landscape of demolition racing games has seen better days. We were introduced last November to Blood Drive, Activision’s spin on the genre, but its lackluster multiplayer mode and unoriginal gameplay left the majority of derby fans out in the dust.

Enter, Mayhem 3D. Zoo Entertainment’s newest project is your typical action arcade racing title with a twist – and no, I don’t mean the 3D. It’s unique in that it combines demolition derby, racing, and a Frank Miller-esque art style to create what appears to be a decently promising game for fans of the sport.

The demolition derby genre is one that I would assume developers would be falling over themselves to make games for. It lends itself well to the excessively testerone-ridden action seen in more and more games these days, and it’s a great American pasttime – one which I am ashamed to admit I know very little about, despite my Texan heritage. (We’re more attune to the NASCAR games, thank you.)

Given the nature of the game, Mayhem obviously places a heavy emphasis on destruction, with various racing elements interspersed throughout. In single player, you’re placed in a huge arena with 7 other cars and are required to destroy all of the other cars in order to gain Mayhem Points, which are used to unlock just about everything in the game, from levels to cars to boosts. 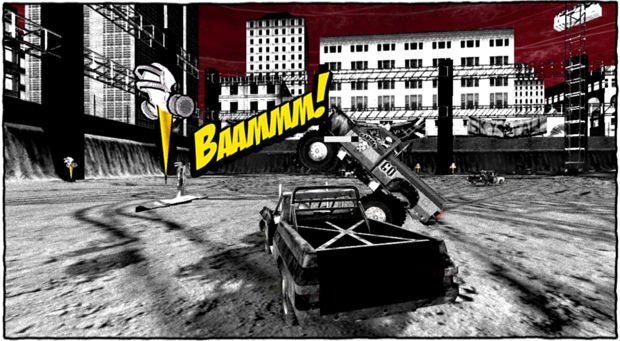 The game offers a 2 player split screen mode or, if you want to compete against friends on XBLA or PSN, an online multiplayer, which allows up to 8 players. A total of 120 levels spread out amongst five arenas gives you a diverse array of environments in which to effectively fuck shit up.

There are four different modes of gameplay, two of which I demoed. Demolition Derby is the main attraction of the game, since I wouldn’t necessarily say that the game’s racing modes are comparable to other such styles currently on the market.

In Demolition Derby mode, you’re placed inside the arena with a set amount of time on the clock and must charge at other cars in order to get their parts. Doing so builds boost and eventually gives you Ramming Speed, which allows you to burst through cars and inflict a significant amount of damage. Domination mode is similar, but instead of destroying other cars, the goal is to simply push them out of the arena and into the pit below before time runs out. 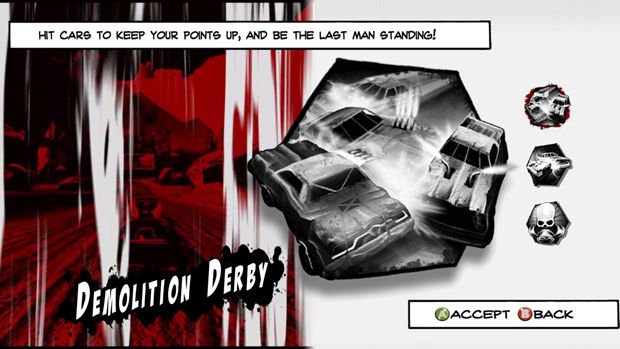 In Banger Racing mode, you’re racing in the standard figure-8 track and the goal is to get first place, which can often only be achieved by destroying other cars. This mode is slightly more challenging because you’re racing against oncoming traffic. Eliminator mode is similar to Banger Racing, but provides a more intense challenge: the player must place first or be eliminated.

An obvious point of pride for Mayhem is its customization options. Players have a choice of six different classes of vehicles (Muscle, Sedan, Wagon, Coupe, Truck, or Monster Truck), amounting to 120 vehicles from which the player can choose. With 155 total unlockables, the game poses a decent amount of replay value. 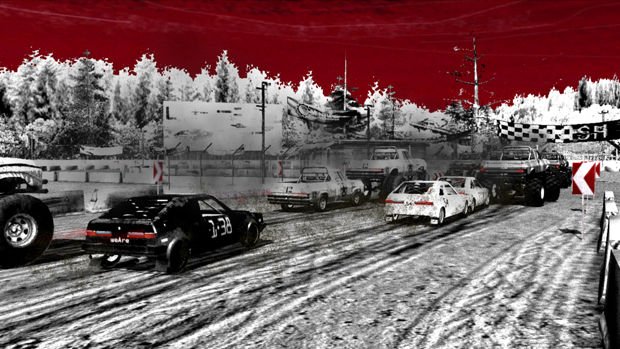 There is some room for improvement in the game’s controls, however. It was difficult getting back on track after being stuck or turned around, for example. Seemingly insignificant factors like this tend to make or break racing games for me, and I imagine the same could be said for others.

The graphics are one of the game’s more unique aspects. It has the distinct comic book aesthetic with only black and white coloring and splashes of red and yellow. I give credit to the developers for using something other than the drab, muddy color scheme I would’ve expected from a game about demolition racing. That notwithstanding, the graphics did seem to look a bit unfinished. Perhaps the art style just doesn’t lend itself well to games with a lot of detail, but I found it tough to distinguish what was what at points. 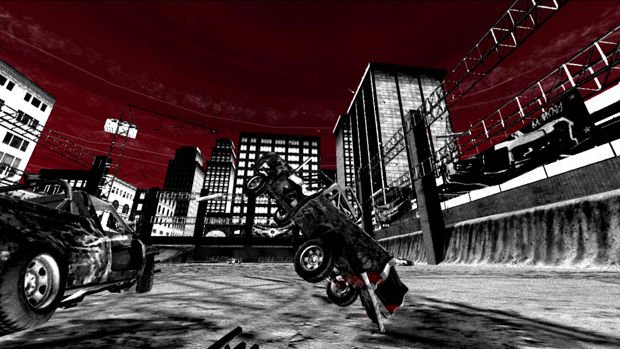 Of course, this wasn’t an issue with the 3D turned on. The game works with any 3D television, but since I do not have access to a 3D TV, I sported the good ol’ red-n-blues. There are 10 different settings for the 3D option, based on your preferences and tolerability. I tried the game in 2D at first, then switched to 3D level 5, and lastly, level 10. I recommend level 10 for the full visual experience, but I can’t imagine using it for more than 10 minutes. Which is to say, I have no idea how the 3D option would fare for the duration of the game, but I assume a headache would be involved.

All in all, Mayhem 3D seems promising for anyone who is already a fan of the genre. Its style and intent may be enough to win you over. If you’re a seasoned racing game fanatic, however, it may fall short in comparison.