[Update: I had initially been informed otherwise, but I’ve since checked with EA, and it turns out that Datapad is not exclusive to the iPad. It will be a universal iOS app. I apologize for the confusion and have updated the article to reflect the new information. Thanks to reader hombrelobo for the heads-up. –Samit]

Mass Effect 3 is arguably the most anticipated game of the first half of 2012, and EA is readying a couple of mobile “companion experiences” to maintain Mass Effect mindshare on as many platforms as possible. One is a free iPad-exclusive iOS app, Mass Effect Datapad, and the other is a full game, Mass Effect Infiltrator, that will launch initially on iOS and make its way to Android later.

EA provided hands-off demos to press at an event in Manhattan earlier this week. From what I saw, it appears that die-hard Mass Effect fans will want to try them both, especially if they want to increase their chances in ME3′s final battle against the Reapers. (As for ME3 itself, I played through most of an early mission at the event. Look for a full preview next week.)

Datapad is a digital compendium of Mass Effect lore — in effect, it puts Commander Shepard’s Codex in your hands for perusal at your leisure. It’s free of Mass Effect 3 spoilers, but it provides details on the series so far. Whether you’re new to the franchise, or you need a refresher on the differences between Salarians and Quarians, Datapad is your one-stop shop for background information on the Mass Effect universe. You can even go through important decision points to see how things might’ve turned out differently, like whether Anderson or Udina was placed on the Council at the end of the original Mass Effect.

It’ll be nice to enjoy Mass Effect 3 with Datapad open on your iDevice as a quick reference, but the fun doesn’t have to end there. EA wants to keep you engaged with Mass Effect even when you’re not playing, and to that end, the app includes a Mail tab that will be updated with messages from characters as you play through ME3. (Datapad is tied to your Origin account, which is how it keeps track of your progress in the game.) There’s also a Galaxy At War tab: yes, Datapad will affect Shepard’s “Galactic Readiness” rating through the ME3 metagame, along with the main game’s co-op mode and the iOS game, Infiltrator. EA wasn’t showing off exactly how that will play out in the app, so I can’t provide further details. 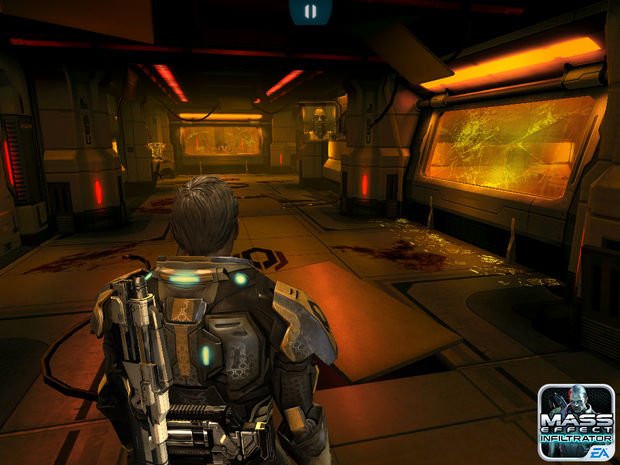 Infiltrator is a cover-based third-person shooter from IronMonkey Studios, the folks behind the excellent Dead Space iOS game. It plays just like that title, with touch “zones” on the screen instead of virtual analog sticks. I saw the game on an iPad, where swiping on the left half of the screen controls movement and moving a finger on the right half aims your weapon.

You play as Randall Ezno, an infiltrator (obviously) who’s working for Cerberus — for now. Ezno “specializes in snatch-and-grab operations: taking alien species and bringing them back to Cerberus for testing,” but he eventually uncovers unsavory details about the organization that force him to reconsider his position. In the ten-minute demo I saw, Ezno is sent to an ice planet to hunt down a Turian. Unfortunately, though, some Geth troopers get in the way.

Once you slide behind cover, taking enemies down is as simple as tapping on them, which causes Ezno to pop up and start firing. He has a variety of attacks at his disposal, including ordinary weapons like shotguns and sniper rifles as well as biotic powers such as Pull and Leash. A slow-motion effect that briefly ensues after a successful kill encourages you to chain them together, which awards you with style points. Levels consist of a series of skirmishes, and the game assesses your performance (time, health, style) after each battle. In addition to grades, you receive credits with which you can upgrade Ezno’s abilities. 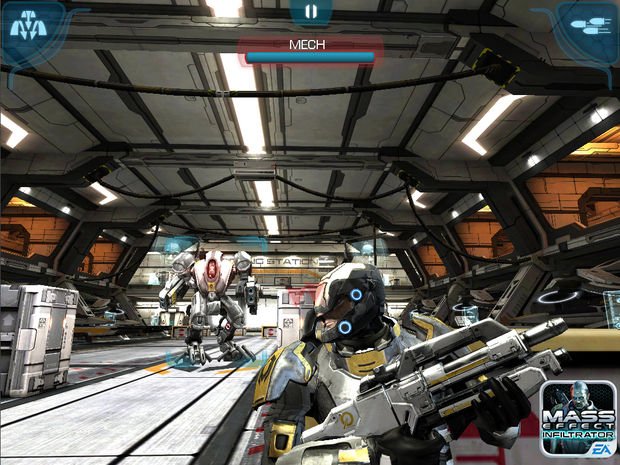 You also pick up Intel, which random defeated foes leave behind. Intel is Infiltrator‘s contribution to Shepard’s “Galactic Readiness” through Galaxy At War; Ezno himself does not appear in ME3. (Note that none of the Galaxy At War stuff — whether through ME3 co-op, Datapad, or Infiltrator — is necessary. You can still achieve the best ending in ME3 without ever touching any of it.)

Ezno makes quick work of the standard-issue Geth, but the snowy environs soon reveal some Geth Juggernauts. After tapping on the upper-right corner to switch weapons, Ezno waits for the red-armored attackers to get within range of his shotgun before blowing them away. Later on, he whips out a long-range rifle to give a Turian sniper a dose of his own medicine. I’d tell you about what happens once the infiltrator finds his target, but sadly, the EA rep playing through the level died before making it to the end. He explained that the level presents you with a Paragon/Renegade prompt: Ezno can capture the Turian gently, or show the alien who’s in charge with a smack.

As you can see from the screenshots, Infiltrator features impressive visuals for an iOS title, even more so than Dead Space. While I didn’t get to see the game in action on an iPad in my hands — for demonstration purposes, it was hooked up to a TV via HDMI — I can say that its graphics are about on par with early games from the current console generation. EA wasn’t talking about the price, but for comparison’s sake, Dead Space on iOS costs $6.99. Look for it on the App Store near the March 6th launch of ME3.