Pinball has to be one of the hardest hobbies to talk about. On the surface, it’s about hitting a metal ball around a slanted table, with some flippers, in the hopes of keeping it from failing down a hole. In reality though, videogames’ grandfather hides behind its simplistic exterior an often more robust and deep gaming experience.

To their credit, few (if any) have captured the essence of this once popular pastime in the videogame landscape better than Zen Studios. They’ve made some truly amazing tables that go far beyond the world of pinball and seamlessly merge it with the digital age. Thankfully, they finally announced the last character for their upcoming Marvel Pinball: Vengeance and Virtue DLC pack, so I can finally share my thoughts on the four new tables that are coming very soon. 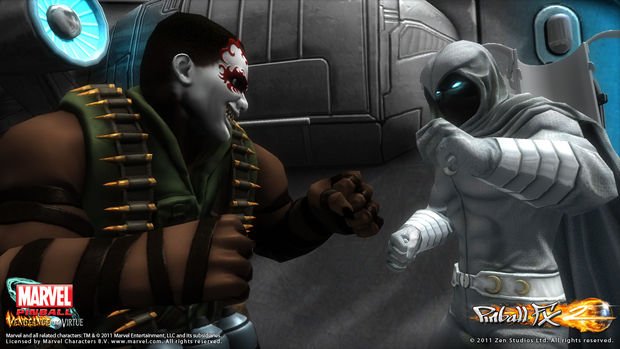 The Vengeance and Virtue bundle is by far Zen Studios’ biggest undertaking when it comes to designing new and fresh pinball tables. Beyond the exquisite style that each of the four new tables showcase, they have also upped the ante in regards to overall presentation. All the artwork — done in-house by Zen Studios — goes through the rigorous Marvel approval process for quality assurance. The new tables also, for this first time, actually use Marvel voice talent to help create a more viable Marvel universe. It’s weird to say, but the Vengeance and Virtue pack may just be the first true cinematic pinball experience.

The new tables: Ghost Rider, Moon Knight, X-men, and Thor offer a wide range of table styles. Each table packs is unique and is a lot more than hitting a ball around some flash tables. In fact, the Vengeance and Virtue pack blends the lines between pinball and videogame more so then any of their previous tables. Allow me to break down the new line-up. 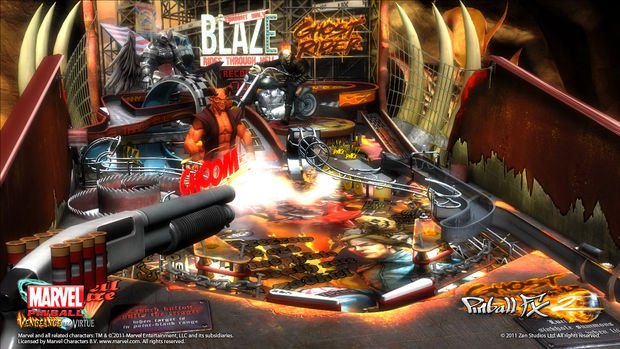 This table really captures the spirit of being trapped in hell. Lucifer appears in all his demonic splendor serving as the table’s main villain and focal point. In one of the table’s mini-games, Lucifer will create a fire-pinball, dropping it straight down the chute. In this game, the option to wager your soul (points) to earn a huge payoff is the challenge. Players can opt out with a smaller wager, but the fun and sport of this table lies in the risk versus reward of many of its mini-game challenges. A special mention should also go out to the Marilyn Manson-inspired music track which completes the experience perfectly. 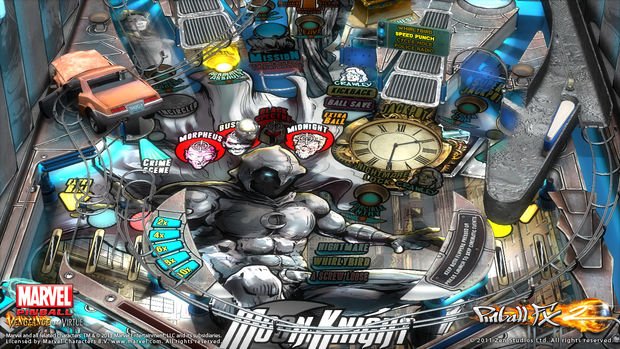 This Marvel hero wasn’t an obvious choice for the new pack, considering there are more established characters like the Hulk still on the table (sorry for the bad pun), but his mystery to the general public allows Zen Studios to be even more creative with the table. For starters, the table is introduced with a cutscene that helps set the stage and shed a little back story. There is an epic soundtrack and the table has some of the most dynamic lighting effects, especially when the moon comes into play. This table also deals heavily with the vengeance and virtue theme of the pack, with players collecting orbs to build a vengeance meter. Filling this meter is a spectacular sight to see. 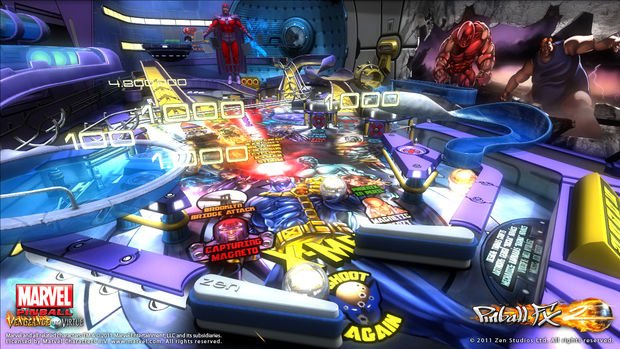 This table has the least amount of 3D models on the table, but the beautiful artwork and frantic missions (based off New X-Men 147 and Uncanny 135 and 136) more than make up for it. Just look at that amazing optic-blast up the center of the table. What makes this table unique is it’s centered around super-villain extraordinaire Magneto.

Since you are filling the role of several X-Men, the missions for this table are directed through the master of magnetism. In Jean Grey’s timed mission, Magneto has her under his love spell and Cyclops is tasked with saving her. To do so, players must win a crazy multi-ball challenge, complete with a red optic-blast colored pinball. 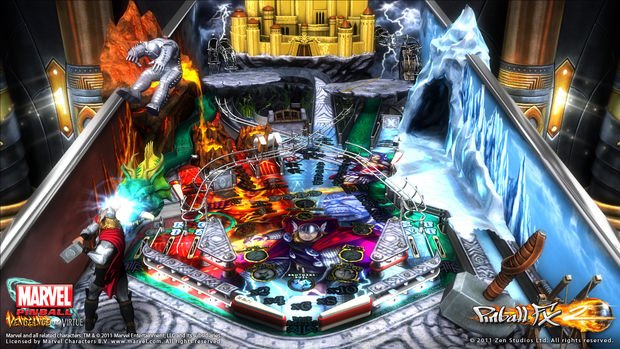 The god of thunder may just have the most impressive table in the Vengeance and Virtue pack. All of his missions are boss fights. The mischievous Loki and world obliterator, Destroyer, are just a few of Thor’s epic enemies to encounter and their challenges are just as formidable as one would think. Thor’s table by far gave me the hardest challenge, as I found myself quickly losing pinballs due to the amount of chaos that ensues. It’s a really colorful table highlighting a variety of the nine worlds that Asgard protects, all sliced into neat little sections of the table with impeccable details from the lighting to the subtle spillage from the volcano in the background.

The previous tables are actually the highest-rated Marvel game in existence, something Zen Studios is proud of, but I have a feeling that they may soon be passed up. Marvel Pinball: Vengeance and Virtue will be available as DLC for Marvel Pinball on PlayStation Network and Pinball FX2 on Xbox Live Arcade on December 13 and 14, respectively.