is the sequel to last year’s Kororinpa: Marble Mania for the Wii. In Marble Saga, players will tilt the world with the Wiimote to get their marble to the end of the level and collect diamonds along the way.

Sounds pretty simple, but it’s not as easy as it sounds. Marble Saga is a great challenge and you can find out more by hitting the jump for my impressions on Marble Saga: Kororinpa. 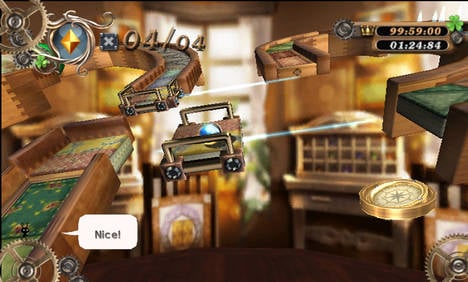 The game will seem easy but will give players plenty of challenges. Players need to move a marble by tilting levels with the Wiimote. Thankfully, the controls are very tight and it didn’t take long to figure out how much tilt I should be applying to the Wiimote as I played.

There will be plenty of balls players can choose from, each with different attributes. There are plenty of round marble designs, such as a dog and cat, but the really fun ones are the oddly shaped marbles, such as the football, flying saucer and even a TV set. Even funnier is the ball that allows you to stuff your own Mii into a marble. Your Mii will actually scream as it rolls around!

There will be seven core worlds with ten sub-levels in each and levels will come in all sorts of designs. It starts off easy with plenty of boarders to keep you within the courses, but later levels will lose their walls and have plenty of challenges such as jump pads, windmills, moving platforms and various other dangers. Players can unlock bonus levels along the way including mirrored versions of all of the levels. 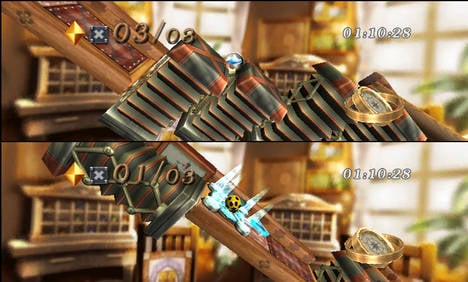 As you’re playing through the levels, you’ll come across junk parts that can be used to design your own levels. The level editor is very simple to use and everything from the main game can be used on the custom levels. Players can share their levels with friends online.

Marble Saga is challenging, but Hudson didn’t want it to be a frustrating experience. If you fall off the level, you’ll quickly reappear on the course and can try again an infinite amount of times. Most levels will have a mid-way checkpoint and anything you’ve collected before falling will remain with you once you’ve reappeared.

After trying my hands with the Wiimote for a bit, I got to see how the Balance Board support was. The Balance Board portion has its own set of levels and it took some time to nail down the motions. I can really see this being fun at parties, as it has the potential of making people fall over a lot. 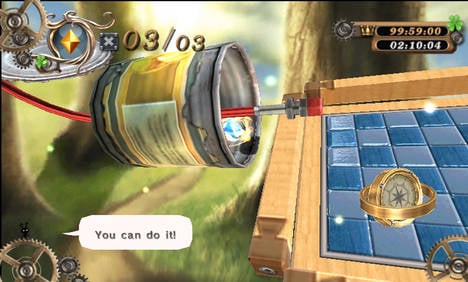 Marble Saga has four-player split screen mode where players will compete in races. One neat thing about the multiplayer is that you can turn on hit detection so you can knock other players marbles off the level.

The game will have Leaderboards that keep track of how fast you’ve completed the levels with what ball and you can expect downloadable stages after the game is released from Hudson.

The game is a blast to play. Some of the levels are crazy, but thanks to the infinite retries, it won’t be a completely frustrating experience.

Marble Saga: Kororinpa is developed and published by Hudson Entertainment for the Wii. It will be out in Spring of 09.