The draw of “reality” television is its ostensibly greater degree of unpredictability over scripted shows, the coveted “you can’t make this stuff up” factor. Many simulation videogames better replicate the infinite variability of life than reality TV does, and one way in which a few recent sports games have gotten there is by implementing real-time physics engines. EA Sports’ venerated FIFA series did that with FIFA 12 last year, delivering often impressive but occasionally laughable results. There was more work to be done; modeling collisions is only one aspect of simulating soccer.

The holy grail in sports games is calculating everything on the fly, taking into account the unending variety of variables in every case. “The philosophy of the team,” explained David Rutter, executive producer for the FIFA franchise, “has been to take all of the inputs that would occur in this real world that we live in, and use them to drive the outcomes of the game that you are playing.” It’s an asymptotic venture, and the talented developers at EA Canada are getting closer every year.

[Editor’s note: I use the terms “soccer” and “football” interchangeably in this article. –Samit] 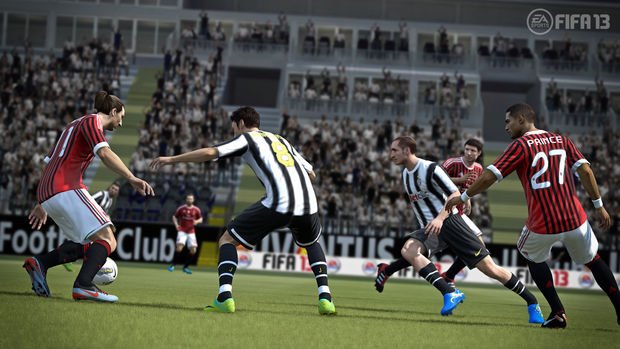 Three of the creative leads behind FIFA 13 delivered a lengthy presentation to members of the press a few weeks ago at EA Canada, located on a sprawling campus in the Vancouver suburb of Burnaby. They discussed five major gameplay innovations that are coming in this fall’s new soccer game, but they did not speak of new modes or any other changes, and we didn’t have a chance to play the game. So there’s a lot more to come regarding FIFA 13 — perhaps at E3, or, more likely, at Gamescom — but for now, I’ll take you through what gameplay producer Aaron McHardy called “a revolution of game-changing features” for the PS3, 360, and PC versions.

Dumb AI is a perennial nuisance in team sports games; it’s always frustrating when a scoring opportunity evaporates because a computer-controlled teammate didn’t do something you perceived as natural, lifelike, and/or smart in a particular situation. EA Canada has revamped FIFA’s positioning code, making AI attackers smarter and opening up the field for your offense. 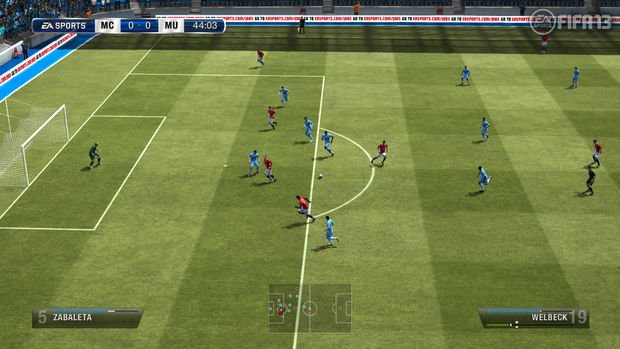 FIFA 13’s new Attacking Intelligence feature is felt in a number of ways. Players are now much better capable of analyzing space to go on decisive runs — they can not only evaluate openings on the pitch and realize they’re in position to make a run, but also can get to valuable space in a manner that creates more scoring chances. This encompasses new behaviors such as stutter-stepping to stay onside, curving runs around defenders, and creating separation from opponents to open up passing lanes, as well as more complex soccer strategy in player positioning and ball movement.

The world’s best players have an unparalleled ability to visualize and predict the progress of a play. As McHardy put it, “They’re processing the game at another level,” always thinking ahead to try and gain the upper hand on defenders. Your teammates in FIFA 13 will do the same: they have the intelligence to understand where the ball is likely to go next, and accordingly — instead of standing around until the play comes to them — they’ll start moving one or even two passes ahead of time, putting themselves in better position to receive passes and propel the attack forward. McHardy played footage from the studio’s test bed environment, complete with wire-frame players, proving the improvements between FIFA 12 and FIFA 13 to be apparent, significant, and remarkable.

Dancing around defenders with Complete Dribbling

Last year’s game introduced Precision Dribbling, a setup that suffered from the same problem that has plagued the movement systems in almost every soccer game: players pushed the ball in a direction and turned their body to follow the ball. It made it difficult to get around defenders without using FIFA’s relatively complicated Skill Moves. FIFA 13 brings in an update called Complete Dribbling. McHardy said it’s “way bigger” than Precision Dribbling, with the key element being that EA Canada has finally separated the moving direction from the facing direction. 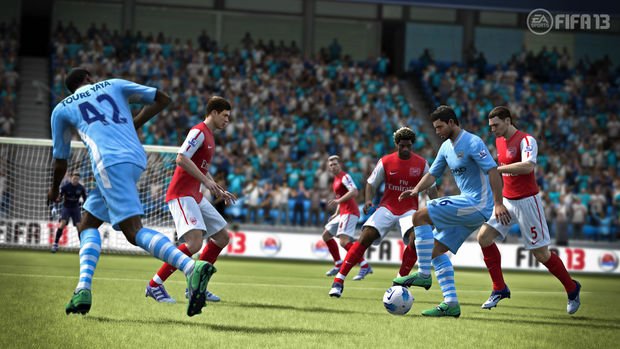 I asked McHardy how important that change is, and he told me it’s “completely liberating.” Until now, he explained, “You couldn’t really face up a player 1v1 and beat him in the way that Messi beats a player 1v1: running straight at him, sidestepping around him, keeping that facing angle forward, and being able to get around the player.” It’s now possible to move laterally while still facing forward, which lets you quickly evade defenders and continue attacking. Complete Dribbling gives you the power to embarrass your opponents, and the freedom and creativity to do it in a variety of ways.

Precision Dribbling brought shielding into FIFA, and Complete Dribbling expands on that with the ability to lock a facing-away angle contextually and chain shielding more fluidly with other dribbling moves. In addition, you now have the ability to change direction more quickly in low-speed dribbles, as well as finer control over close touches. Some of these elements came from the dribbling system in FIFA Street, according to Rutter. While Street is an arcade game, the FIFA team felt that “mapping stick control one-to-one with foot movement work[ed] well,” and implemented parts of that setup in FIFA 13.

Complete Dribbling also makes advanced dribbling tactics accessible to all players. It’s controlled completely by the left stick, so even novices who can’t pull off Skill Moves will be able to dribble circles around their opponents in FIFA 13. “What we would like is for everyone that plays our game to feel like they have tools to go around defenders,” said line producer Nick Channon. 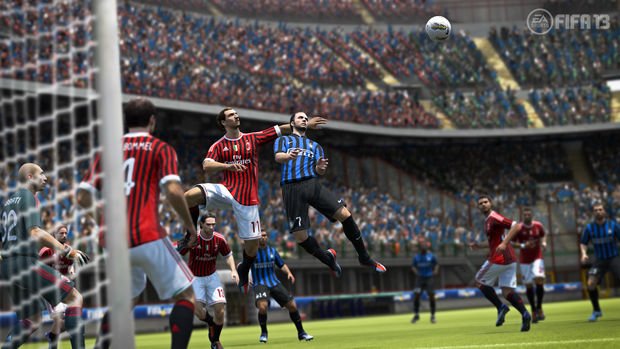 McHardy played footage from a real soccer match in which Ronaldinho perfectly trapped a pass from 50 meters out — just one gentle tap from his foot, and the ball fell safely into possession. But he’s one of the world’s best footballers, and even he can’t pull that off in every situation. The next clip McHardy showed was from FIFA 12, in which a middling player managed to receive a long pass with perfect touch. That’s simply not realistic, and FIFA 13’s First Touch Control system aims to fix that.

This year, the ball isn’t glued to your foot. The new system introduces “contextual trap error,” taking into account a wide variety of factors to determine how easy or difficult it will be for a player to secure the ball. Rain makes it much tougher; a soft pass is easier to gather, unless it’s coming to Earth from way up high; and a well-timed shove from a defender could make all the difference. First Touch Control also accounts for players’ attributes, differentiating the Ronaldinhos of the world from less skilled footballers. Channon made sure to note that it’s “unpredictable, [but] it’s not random, and that’s a very key difference.”

EA Canada implemented the system to eliminate perfect control and introduce opportunities for your opponent to take back possession. Playing aggressive passes will make it harder for your teammates to corral them, and it will give the other team chances to pick up balls that bounced away from an attacker’s foot, providing balance to the more offense-minded gameplay changes discussed above. 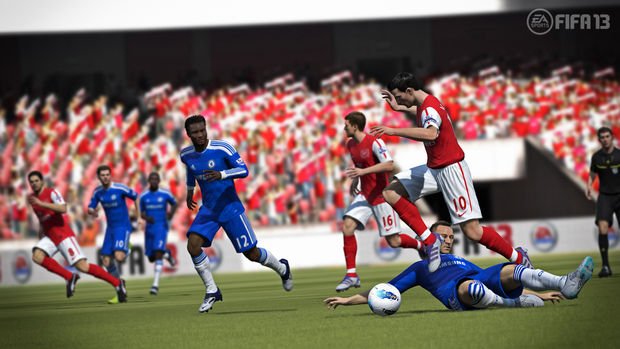 The FIFA team debuted a completely new collision system with the Player Impact Engine last year, and it had its share of glitches. Many of those errors — the infamous “kiss,” or players’ limbs being forced into biomechanically-impossible-without-tearing-tissue positions — arose because FIFA 12 didn’t properly model the musculoskeletal structure of its players. Joints now have the proper tension associated with them, and EA Canada has added (and slowed down) animations so players can disentangle themselves without expressing their love for each other. Not that there’s anything wrong with that.

“What’s really rewarding this year is building loads of features” on top of FIFA 12’s solid foundation, said Channon. The original Player Impact Engine had a major limitation: it only calculated physics for collisions in which one player already had the ball. Two opponents waiting for a pass to drop, however, had very little interaction. FIFA 13’s evolution of real-time physics allows for players to push and pull each other off the ball, bringing in the crucial element of jockeying for position. “We never really had that concept in our game,” Channon told me, “and I think that’s something we’re very excited about.”

This development makes playing defense much more active, and it allows bigger players to use their size and strength to their advantage in preventing attackers from getting to the ball. It’s all about the “battle for the ball,” said Channon, noting that “it’s like any sport, really: if you’ve got good body position, you’ll generally be in a good place.” 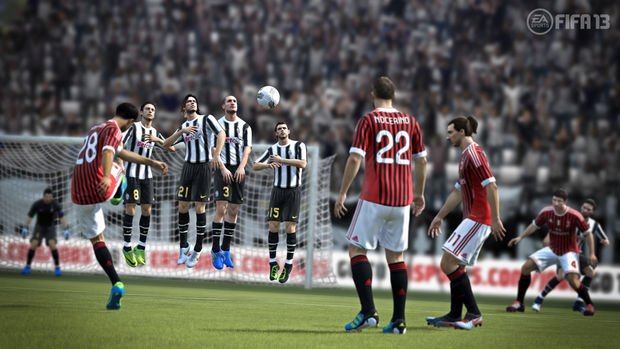 I have limited experience playing FIFA, but even I’ve noticed that free kicks weren’t very exciting — not nearly as interesting as they are in real life. “Free kicks, in FIFA, have just been kicking the ball over the wall,” admitted Channon. That’s only one element of many in the highly variable setup, and FIFA 13 finally retools the system to give you numerous options, both on offense and defense.

The kicking team can now organize up to three players over the ball to play around with fakes, and execute dummy runs to take the ball down the side or to the front. Test bed footage showed two players hopping over the ball, after which the third player sent a pass to the first, who put a shot on goal.

You can add to or subtract from the defensive wall, and even creep upward (with the potential for the referees to notice and penalize you). If you mis-time a shot-blocking attempt, you can reform the wall and jump again. More aggressive teams can send a player toward the kickers to intercept passes or block shots. These changes have been “in the making for a while,” Channon told me, “and we felt that this year was the time to do it.” 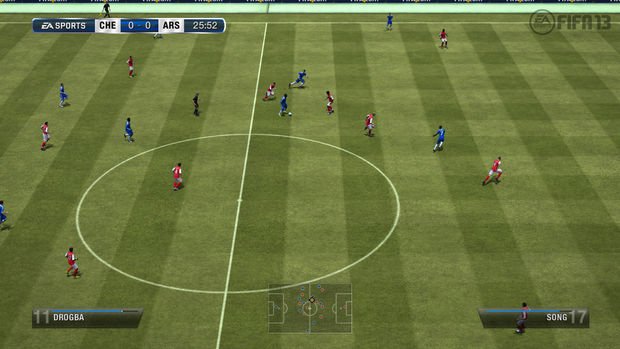 Minor enhancements can have major effects

McHardy closed his presentation by discussing additional gameplay improvements. Last year’s iteration of real-time physics made it “infinitely more difficult” for referees to call fouls correctly, so the team has “re-architected” the rules system to work better. They have also humanized the CPU by making it a bit more forgiving, especially on Professional difficulty, which used to be robotically perfect.

Lateral defensive containment is a new option, letting defenders cut off passing lanes by moving sideways instead of only toward or away from attackers. On offense, you can take advantage of new pass types, sending lofted through balls or passes that bounce over defenders’ outstretched legs. EA Canada has also added animations for 180-degree shots, off-balance shots, and celebrations. 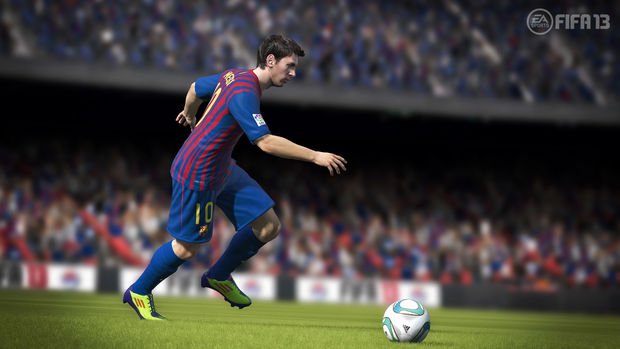 As you can see, EA Canada is doing a lot of work to more accurately simulate soccer. It took Rutter, Channon, and McHardy 90 minutes to cover all the new gameplay features — that’s how much is changing this year. I heard a few amazed gasps from fellow journalists during the presentation, so it seems like FIFA fans have a lot of stuff to get excited about between now and FIFA 13’s launch this fall.