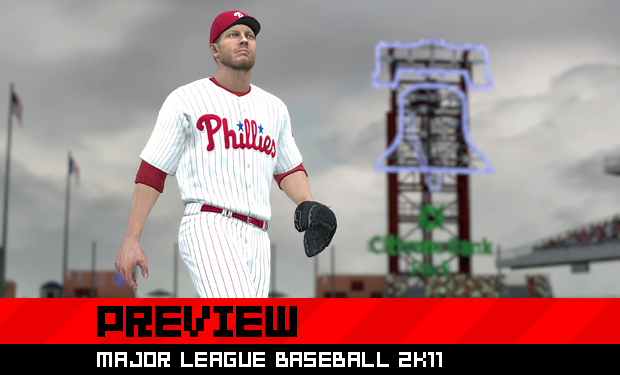 2K Sports’ exclusive third-party development contract with Major League Baseball hasn’t really paid off for the publisher’s parent company, Take-Two, due to a series of baseball releases that have ranged in quality from half-decent to poor. Last year, developer Visual Concepts delivered the first respectable effort in years, Major League Baseball 2K10 — it got most of the fundamentals right, but it still wasn’t quite good enough to give Sony’s MLB 10 The Show any serious competition.

This year, Visual Concepts is aiming to improve on the solid foundation of MLB 2K10, polishing what’s there by addressing underlying issues. I played a few innings of Major League Baseball 2K11 earlier this week, and from my hands-on time, I can say that the studio is on the right track. 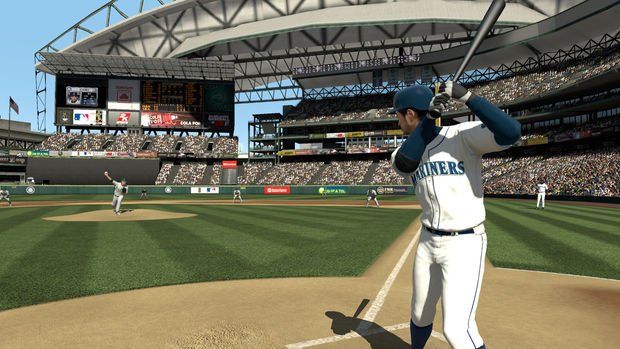 The fielding in MLB 2K10 was often frustrating. So the studio focused on defense for MLB 2K11, making important changes in a few areas that go a long way toward improving the feel of fielding. Ratings now play a more significant role in the game, thanks to a tweaked throwing meter and a new method for catching fly balls. On a ground ball to an infielder, the throw meter will have a green zone and a red zone; the size of each depends on the fielder’s throw accuracy. For Robinson Cano, as you might imagine, most of the bar is green. And even if you overshoot all the way into the small red zone, his throw might only pull Mark Teixeira off the first-base bag. But someone like Luis Castillo will not only have a sizable red zone — if you end up in it, his throw is likely to sail into the stands.

Fielding balls in the air is similarly ratings-dependent. On a fly ball or pop-up, you’ll see a large white circle; the ball will end up somewhere within it. A small yellow circle will come up as the ball is falling to Earth, and it gradually shrinks to let you know exactly where the ball will land. For a good fielder, the yellow circle will come up quickly after the white one. So with a defender like Carl Crawford, you’ll be able to get into position to make the catch well before the ball comes down. But if you have, say, Adam Dunn in the outfield, pulling down a fly ball is going to be an adventure. 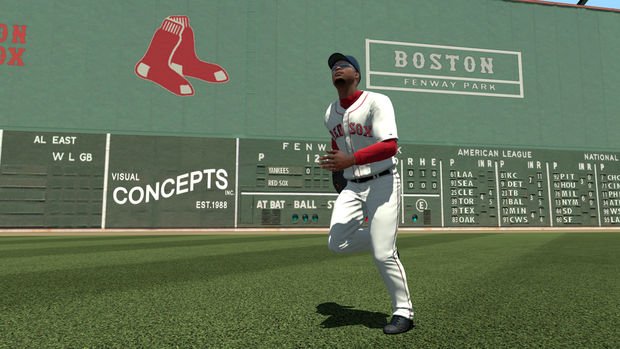 Another change that looks to help fielding is the introduction of new animations. The increased variety, especially for bobbled balls, makes the game more fluid and realistic. It’s not 100% there yet — I saw inconsistencies like a big step and a laser-like throw from a fielder who was maybe ten feet from his first baseman, which really pulled me out of the action — but I’m hoping that such nagging issues can be ironed out between now and the release date.

I found the game’s visuals to be alternately impressive and off-putting. Many of the player faces are accurate, while others are off — this remains an issue across most sports games — and all of them suffer from dead eyes and stiff mouths, irregularities that scream “uncanny valley.” Numbers on the backs of jerseys are textured to stand out from the shirts themselves, but there’s a strange upward distortion of text on players’ chests. Stadium-specific camera angles for the behind-the-pitcher view are a nice touch, and the revamped player models look great. C.C. Sabathia is a hulking brute on the mound, just as he should be.

On the pitching front, subtle changes seem like they’ll provide a ramped-up challenge. In MLB 2K10, it was way too easy to pitch with pinpoint accuracy — even with sub-par hurlers — once you got good enough. Visual Concepts has introduced variance for missed analog-stick gestures, so even if your gesture is off in a particular manner each time, you won’t be able to easily predict the behavior of the pitch: it might break more or less. Real pitchers can’t simply aim a pitch at a particular spot and get it there every time, and even MLB 2K pros won’t have that luxury anymore. There’s now a variable strike zone, too, which brings in the time-honored “human element” of umpires. 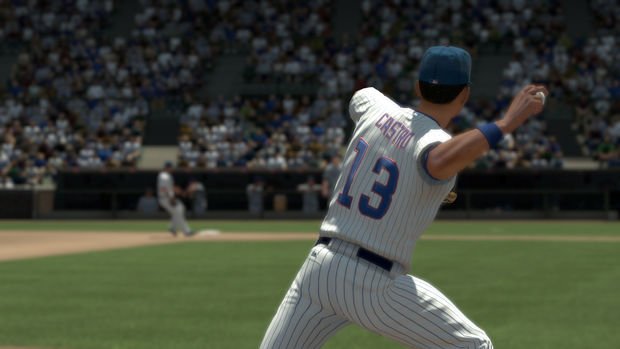 At my demo, 2K wasn’t yet talking about any changes to the game’s modes, except for one: a feature they’re calling Dynamic Player Ratings. In MLB Today, My Player, and Franchise, players’ real-life performances will alter their in-game ratings. Derek Jeter might have a good contact attribute, but if he’s mired in a two-week slump, that rating will slip somewhat. I can’t yet tell what kind of effect that will have in those modes, since I didn’t get to play them, but like the rest of the changes that Visual Concepts is implementing, it certainly sounds promising. In their position, it seems prudent to focus on improving the existing game instead of trying to grab gamers’ attention with flashy new features. We’ll have to see if that approach pays off.

Filed under... #2K Sports#Destructoid on assignment