At a Namco Bandai Pre-E3 preview event last week, another games press member and I mulled over what upcoming PS3/Xbox 360 title Majin and the Forsaken Kingdom reminded us of. It took awhile. There were scenery elements that brought us back to Team Ico’s work in games like Ico and Shadow of the Colossus. Other design elements reminded of a Studio Ghibli animation, and in the best way. The whole big guy/little guy made me think of the upcoming game The Last Guardian, and the game’s combat featuring the duo reminded me of RPG White Knight Chronicles. And the characters themselves seemed familiar too, though these connections were harder to lock down. This writer joked that the mossy-backed giant of Majin reminded him of Pokemon‘s Bulbasaur.

Pokemon cracks aside, all of the ties we noticed from other games were positive ones, which makes Majin and the Forsaken Kingdom a very interesting title from a visual standpoint. And, of course, there’s the whole guy-and-his-personal-mystical-god angle too. All of this combined makes for one of the most original titles I’ve seen this year.

Read on for our preview of Majin and the Forsaken Kingdom. 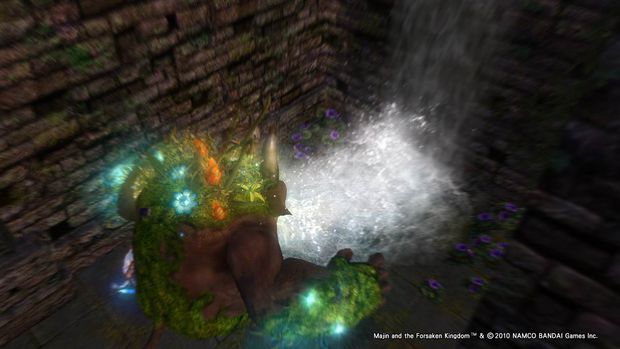 We’ll admit that it’s not exactly clear how Majin and the Forsaken Kingdom will play at first glance. It takes awhile to see, but it turns out that the game is an action title that encourages two-character puzzle solving, combat, and platforming. Basically, nothing happens with one character alone beyond the point where the main character meets up with the giant majin and forms a partnership. They work together to enter this Forsaken Kingdom, a cursed and beautiful place where all that enter have never returned.

Luckily for you, human thief that has no memory, you’ve come across a huge majin giant that is happy to help you out, as you can access small places and retrieve a special fruit that acts as a source of power for it. Powered by this fruit, the giant can do the heavy lifting (literally), pulling up doors, performing heavy combat and carrying puzzle items that you couldn’t. You don’t know your name, so the majin, Tetol, names you Tepeu. They shake on their partnership and that somehow triggers a shared visual memory of the giant’s past, and it seems pretty distressing. Something tells me that this isn’t the last time one of these flashbacks is going to happen. 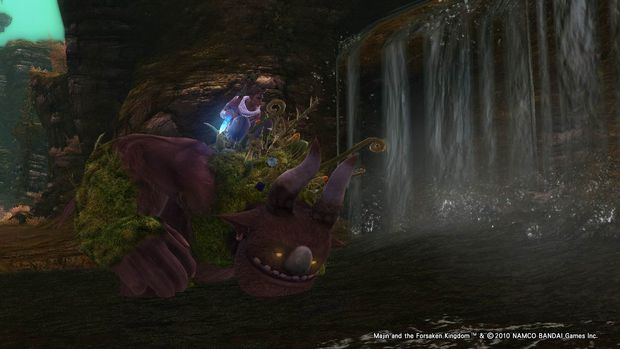 In these ruins, there are some really creepy, dark, oozy, humanoid creatures lurking. Perhaps these things are why no one has ever made it out of the kingdom alive. Making it past these creatures involved a bit of sneaking around from high places as the Tepeu, doing things like throwing distractions or explosive barrels to progress past them. Some of the early sections I saw had you entering an area as the Tepeu, working to set the stage so that the big guy could come in and help you out. In the earliest example I saw, Tepeu would need to sneak in and find the fruit the majin needs to pull open the door and help him out with the enemies.

Once Tetol is there to help, you’ll see its mysterious powers at work. When these strange enemies are killed, an orb floats above their bodies. This ball of evil can reform into another enemy, but the majin can absorb it and nullify it when its around. Likewise, the ooze that appears on your body from face-to-face enemy combat can bog you down — Tetol can also absorb this. Additionally, the giant makes a wonderful “tank” that you can control with a contextual pop-up menu that lets you command him to do things like “stay” or “attack.” I saw how important this was not only in platforming/puzzle sections, but also in sub-boss fights where you’d need to call in the big muscle. In the last scene I saw, Tetol was used to pull over a huge catapult. He ended up triggering the catapult with Tepeu inside, letting him access higher platforms. 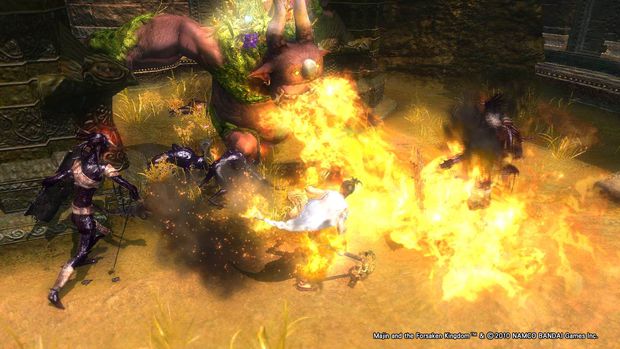 Majin and the Forsaken Kingdom is a deliberately slow-paced open-world adventure that has so many things going for it visually that its hard to look away. It truly is a lovely looking game with its soft look and fantasy setting. But when you see how the game’s partnership-based exploration works, it’s quite lovely in a completely different way. We were told that what we saw was still fairly early in the development cycle, which means that Majin could end up being even more lovely when it’s done.

Expect to hear more about Majin and the Forsaken Kingdom next month at E3.