The adventure/roleplaying game is one of my favorite hybrids, next to the Liger, and undoubtedly the first series that the mind conjures up when thinking of this genre is Sierra’s Quest for Glory titles (other than the fifth game, an action RPG). Puzzles and puns mixed with classes and combat, the two genres made excellent bedfellows.

Lamentably, neither the franchise or the genre really made it out of the ’90s, and publishers weren’t exactly keen to support anything with lots of pointing and clicking. That’s why we have Kickstarter now, right?

Himalaya Studios, the team behind several Sierra remakes, is working on a brand spanking new adventure in the vein of Quest for Glory, called Mage’s Initiation. I recently got to take the alpha demo for a spin — a very, very short spin — with one of the classes, and I’ve come away with the desire to play more, if only because the press demo was absolutely tiny. 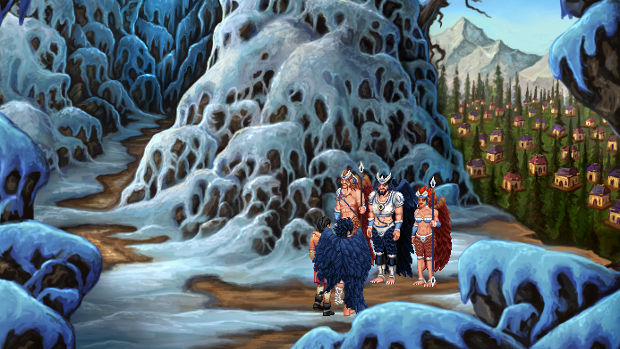 The peaceful land of Iginor is about to get a nasty shock. Evil is afoot. Isn’t that always the case with these fantasy adventures? It’s never the threat of people being far too nice that sends the protagonist off on some grand journey. In this case the protagonist is D’arc, a teen mage. He’ll be off gallivanting on some important errand for his masters throughout most of the game, but for the purposes of the demo, he’s just learning the ropes from the safety of the mage’s tower.

Mage’s Initiation will feature four mage classes, each corresponding to the elements of earth, wind, fire, and water. The different spellcasters come with unique spells, strengths and weaknesses, and personalities — the point is to play the game more than once, clearly. I didn’t have such a choice, however, and was restricted to playing a fire mage. It’s okay, I thought as I consoled myself, I would have chosen that anyway.

D’arc’s home is a rather wondrous place, with the three rooms being showcased all suitably elemental. The library area looks like an indoor forest, with tree-like bookshelves and mossy tables with grubs that protect the parchment; the training room is all stone and flames, with armor and weapons covering the walls, and even a wee dragon standing guard. There’s also the beautiful fountain room, and aquatic paradise with aquariums for walls and a large central water feature.

Everything is presented in detailed VGA-era art that sent me back twenty years. It’s nostalgic, but still very easy on the eyes. During dialogue, character portraits pop up next to the text revealing more realistic visions of the characters complete with lip-syncing. The voiced dialogue is absent right now, presumably because it has yet to be recorded. 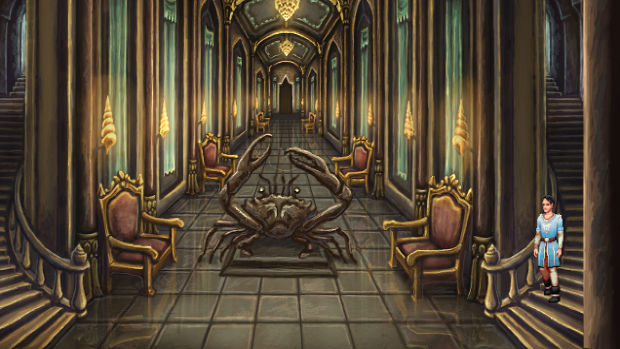 I was presented with two challenges in my brief playthrough, the first being a traditional yet satisfying puzzle. I was given a conductor, a device that allowed me to increase my magical aptitude, and was tasked with activating a gem which would power it.

The puzzle retained the elemental theme established from the get go and was both simple and logical. With it, a divide between the different elemental mages was hinted at, and it served as an unobtrusive tutorial.

Mage’s Initiation may look like it’s just popped out of the ’90s, but it has been designed with some modern sensibilities. Most notably, the robust interface and the way players can customize how they interact with the world make for a less obfuscated experience. You like the classic “verb coin”? No problem, toggle that on and you can employ that for the rest of the game. If you’d rather scroll through potential actions you can select that instead. You could even just hover over the bar at the top of the screen and choose your action from there. It’s all exceedingly convenient. I’m a verb coin man, myself.

With the gem powered up, I was able to equip it and reap its benefits. Only two gems can be equipped at a time, and this one gave me a minor boost in my magic attribute. Continuing my task led to me gaining my first level, where I was able to spend three points on my strength, magic, intelligence, or constitution. I like my mages buff, so I pumped it all into strength and then drank some creatine. 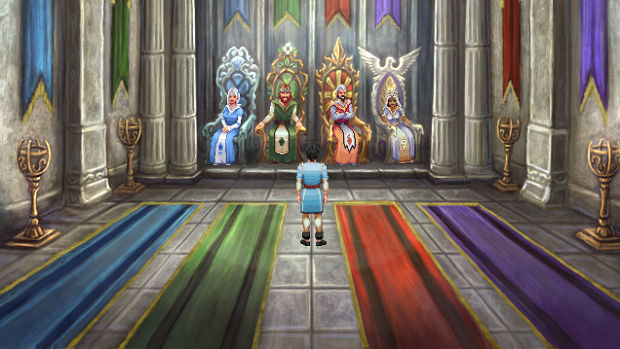 Level 2 mages get to kill lots of goblins, it turns out, and that was my second challenge. Battles take place in real-time, and I could direct D’arc to move around the battlefield, avoiding the nasty midgets’ maces and arrows, even hiding behind a bush at one point, while casting three different spells. I was able to select my spells using hot keys and then fire them off with the right mouse button, but I could also just select them directly from the interface.

The sole combat scenario felt a bit like another puzzle, really. With only two potions — one for magic, one for health — and slowly regenerating HP and mana, I had to be thrifty when it came to unleashing my arcane onslaught, waiting for the right moment and using the right spells. Even the environment came into play as I led them around in circles, and, as I mentioned above, hid behind a bush.

While I did find myself enjoying the fight, the controls are a wee bit fidgety and not particularly responsive, so one would hope that this aspect will be tightened up over the next year. Even at a paltry level 2, I did feel like I had quite a few options when it came to dispatching my tiny green foes, though, and no small amount of power, so it will certainly be interesting to see if Mage’s Initiation can keep the momentum going.

With the tiny slice of the game I played, I’m cautiously excited for Mage’s Initiation. I confess that this is as much due to my love for Quest for Glory as it is due to the demo, but it appears to have some substantial depths for players to plumb and certainly nails the sorely missed, by me, VGA aesthetic found in Sierra adventures, among others.