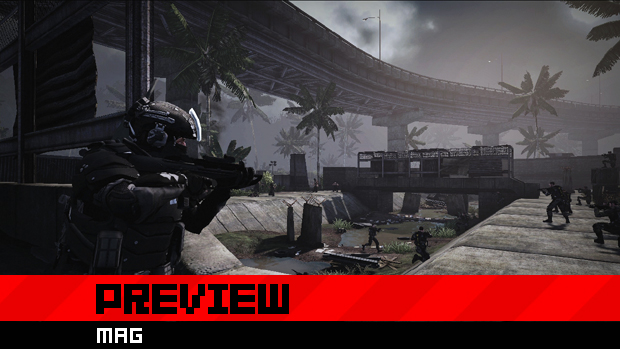 Last year at E3, Sony made an announcement that left a lot of people (including me) scratching their heads. The game announced was MAG — an acronym for “Massive Action Game” — and the trailer boasted an experience that would allow 256 players to participate in the dirty business of war on an epic scale.

How were they going to be able to do that? I have difficulty getting into games with half a dozen people sometimes. And can you imagine being in a lobby with 255 other people shouting obscenities and racial slurs?

We haven’t heard a lot about MAG since that time, but Sony and developer Zipper Interactive (makers of SOCOM) are finally lifting the veil on their near-future combat game. Last week, I was invited to visit their studios in Seattle, and had a chance to give the game a whirl. The results were, shall we say, impressive.

MAG takes place roughly twenty years into our future. Resources are dwindling and the nations of the world, unable to afford the expense of funding their own military excursions, have come to rely upon private military corporations (PMCs) to do their dirty work. This has led to the rise of three main competitors for these lucrative government contracts — Raven, Valor and SVER.

Each of the three PMCs has a distinctive look and style to them, and players will choose which company to join when they first begin playing MAG. Raven is sleek and high-tech in appearance, wearing carbon fiber uniforms and armor made of molded plastics and metals. SVER are more scavengers by nature, building their equipment with parts found lying around battlefields; they have a hard, aggressive look to them. Valor consists of hardened combat veterans with grizzled looks, chiseled physiques and a more traditional camoflauge garb.

It’s an interesting setting and one that Zipper intends to offer persistent change to. The game is described as an ongoing 24/7 tournament, with the game world itself as its prize. How they intend to implement these concepts is unclear as of yet, but the possibilities are intriguing.

A 256-player multiplayer game is a difficult thing for me to grasp. It’s a staggering amount of players, and it was hard to imagine how Zipper Interactive was going to manage to keep it from becoming a chaotic mess. Key to this is their command structure of squads, platoons and commanders.

The forces are broken down into squads of eight players, with one player designated as a Squad Leader who can issue orders. The Squad Leaders answer to Platoon Leaders who, in turn, take orders from the OIC (Officer in Charge). By using this chain of command, orders are assigned to individual squads, which prevents the game from turning into a random and frustrating deathmatch scenario.

Games will typically involve one PMC attacking while the opposing force defends. Leaders have the ability to assign FRAGOs (Fragmentary Objectives); these are specific targets that will help to work towards the overall objective of your mission. Bunkers and anti-aircraft weapons are a couple of examples of targets, and there are rewards for destroying or taking them out.

Bunkers act as spawn points for defending forces, and their elimination makes it harder for forces to reach the front line. Similarly, anti-air guns keep your army from deploying airstrikes that could devastate enemies. Of course, the defending force has the ability to repair destroyed structures if they can get close enough to fix them. The strategic possibilities don’t end there, however. Is your platoon struggling with an entrenched force? Your leader can call upon another platoon to come in and give you some support to turn the tide of battle.

Orders are issued through the game’s command system. By bringing up a map of the battlefield, commanders can see key points, which their squads may attack as an objective. Commands are given to the entire squad with a click of a button, and they’re off to the races. There’s no need for voice communication in objectives, removing any concern about who has a headset and who does not.

Voice support will be implemented in MAG with a push-to-talk system. Clicking down on the right thumbstick opens up the channel for you to speak, and I’ve been assured that muting specific players will be quick and easy. There is a chance that Zipper will implement the ability to have free, squad-wide communication without the button press as an option for teams who wish to play this way, but it has yet to make it into the product as of this time.

Nobody is required to follow orders, either. Players are completely free to ignore their commanding officers and run into battle with the enemy, but there are advantages to working with your squad. If you have a particularly strong squad leader, for example, there are morale benefits to sticking close to them in the form of Leadership Abilities. The abilities themselves are determined by the leader’s rank in the chain of command, and their effectiveness is based on the experience level of the officer. Abilities include faster reload time, resistance to attack, and decreased wait time to complete objectives such as repairing or bombing a structure.

All of the advantages to being a leader sound great, but they do come with some risk. Using them requires that the leader be in the thick of battle in order for the bonuses to be effective, and if they fall, they can no longer issue any orders or use any abilities until they have redeployed. Having your leader taken out can be a serious blow to the success of any squad.

When a player takes a fatal wound, they are given a choice. They may either lay wounded until they have bled out in the hopes that another squad member will come along and heal them, or they can instead choose to bleed out instantly to try and catch the next redeployment of troops. These respawns occur across the entire game simultaneously and happen every 15 seconds. Even in death, there’s a strategy at work.

But enough talk about mechanics. The big question is, with all of the logistical considerations, can a game this large actually be fun to play? At this point, after having the opportunity to play through a large portion of what’s considered a typical engagement, the answer is an emphatic “yes.”

The game in which I played did not consist of a full 256 players, but a group half that size made up of Zipper employees and players from other Sony offices. The gaming press was grouped together into a single squad and dropped directly into the action.

As members of SVER, our main objective was to capture two prototype troop transport vehicles from a rival PMC, the high-tech Valor. Right from the start, my commanding officer directed the squad to destroy a bunker near the perimeter of the enemy base. To do this, we would have to press on through opposition, reach the rear of the bunker, and plant a charge … and then wait for it to explode.

As I ventured forth into the fray, I was immediately struck by two things. First, MAG is absolutely gorgeous. Everything from the battle-damaged structures to the character models and the incredible smoke effects are downright staggering in their beauty. The second observation I made is that I could see no lag whatsoever amongst any of my teammates as they pressed on ahead of me. Clearly, the full-scale games that Zipper has been testing since last year have returned some impressive results for their new proprietary engine and server architecture.

Weapons and gear come in packages — I started out with an assault rifle, grenades, a pistol and a health gun that can restore a small amount of health (both to the player who uses it and to others). The other packages available to us in the demo featured a sniper rifle and (my favorite) a heavy machine gun. Toting around that machine gun slowed me down quite a bit, and recoil was pretty awful. But quickly dropping into a prone position and deploying its bi-pod made my accuracy shoot through the roof and I was capping the heads of enemies in no time at all.

After my team managed to destroy the bunker, the CO ordered everyone to a rally point before giving the next target, an anti-aircraft cannon situated on a nearby platform. I never managed to even set foot on there, so thick was it with enemy forces, but the rest of my team managed to take it down in a few minutes’ time.

This opened up the option for our commander to call in a Strafing Run, a tactical support maneuver that sends in planes for multiple carpet bombing passes of the region. Overhead, I could see the jet exhaust as our bombers came in and utterly decimated soldiers in the area with thunderous amounts of munition.

The other advantage to having air support quickly became apparent when I next bit the dust. As the redeployment countdown ticked by, my view of the battle turned skyward and I could see a troop transport plane flying overhead. The next thing I knew, the camera shifted again and I was viewing myself from above as I soared down into the battlefield.

While in my descent, I was given a bit of control over where I would land, giving me the opportunity to take advantage of the parachute to take a higher ground position. Meanwhile, enemies aware of the coming influx of troops attempted to take advantage of my vulnerability, and eliminate me out before I could hit the ground at all. Thrilling is the only word I can come up with to describe the experience.

Soon, my teammates drove past me with the first of the troop carriers we had been sent in to steal, and I followed behind on foot to help defend them. Sadly this is the point at which my time with MAG came to a close and, while hesitant to put down the controller, it looked as though we were on the verge of striking a decisive blow for our corporation.

Zipper Interactive is currently wrapping up the alpha phase of development and I’m suddenly finding myself really excited about the prospects of MAG. The combat feels really solid, and while I did experience one game-breaking glitch during my play session, the vast majority of my time spent playing ran as smooth as silk. Keep an eye on this one, as I suspect it’s capable of breaking records far beyond its player count upon release.

Check back tomorrow when I’ll have an interview with MAG‘s lead game designer, Andy Beaudoin.