Like I mentioned in my FIFA 12 iOS preview, I had not really used an iPad until EA’s Summer Showcase, so playing the mobile version of Madden 12 was an interesting experience to say the least.

For those who played last year’s game, EA is promising several big additions, which seem like genuine improvements that will lend this mobile game depth. With respect to the actual gameplay, however, it was hard for me to get past the unfamiliar touch controls and comparisons with Madden 12’s console “big brother” I had played prior.

With Madden 12 for mobile platforms, EA’s intent is to capture both hardcore and casual Madden fan, thus there are two different gameplay modes. Classic Mode builds off of the general gameplay formula from last year’s game. The majority of the controls are mapped to button presses, while you’re afforded a stopwatch button that will allow you to slow time to make decisions. Arcade Mode is the more accessible of the two, focusing on a lot of swiping and tilting motions, employing the touch screen and accelerometer, receptively.

While slowing time may seem like a feature that should be relegated to the more “casual” Arcade Mode, it actually ended up being a necessity during the regular gameplay, partly because there’s a bit of action going on off screen you can’t directly see and partly because the controls can be a bit imprecise. While on offense, it’s almost necessary to slow down time in order to find an open receiver, whose level of openness is denoted by the color of their name on the screen (green being wide open, red being covered, yellow resting in between). 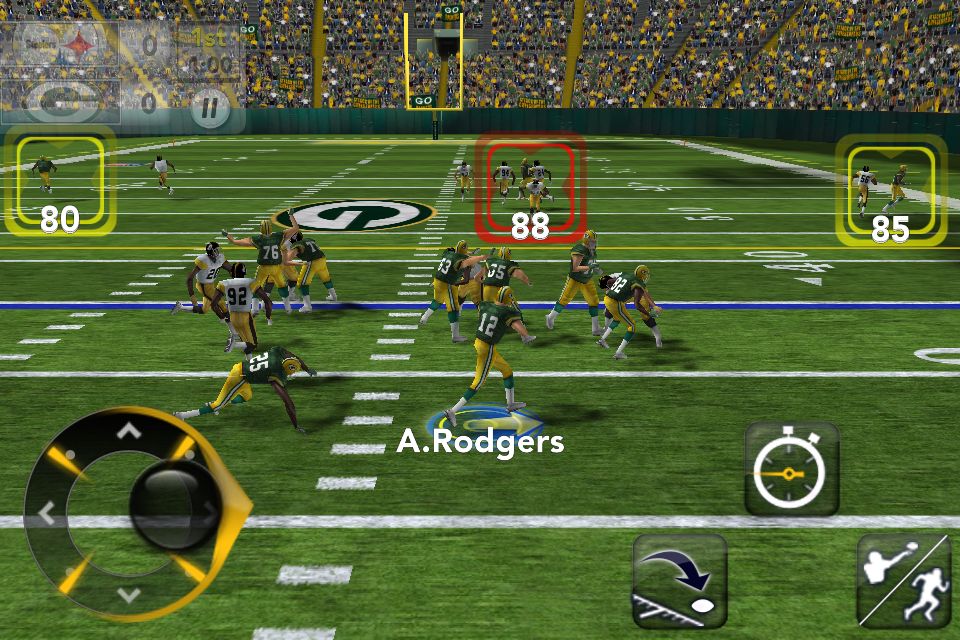 The playbooks have been expanding from last year’s iteration with the intention of better reflecting a team’s tendencies, as opposed to having every team play from the same generic playbook. One other neat play calling feature is the player’s ability to call a custom audible at the line of scrimmage; after calling an audible, you can actually draw up your own route with the touch screen. While I was told special attention was paid to hits in the game, collisions still felt oddly hollow in my brief hands on, as players seemed to just run into each other, prompting a repetitive “hitting sound” over and over.

The game offers an Exhibition mode, meant for quick sessions, as well as a full Season mode, allowing you to go in-depth into the NFL season and manage your roster. There is also a Playoff mode, which will allow you to play out last season’s playoffs, and I was told that it would be updated to reflect the playoff scenario of the upcoming 2011-2012 season after the season ends, which is nice.

In addition to these single-player offerings, the game allows head-to-head competition via Bluetooth. The game also taps into EA’s new Origin service, allowing in-game achievements (like intercepting four passes in a game) to be posted directly to your status updates. One interesting thing to note is that the game offers two leaderboards. The first is the leaderboard containing your friends, which tracks all of your (and their) wins and losses (not just head-to-head play) and allows for sorting by day, week, month, and year. 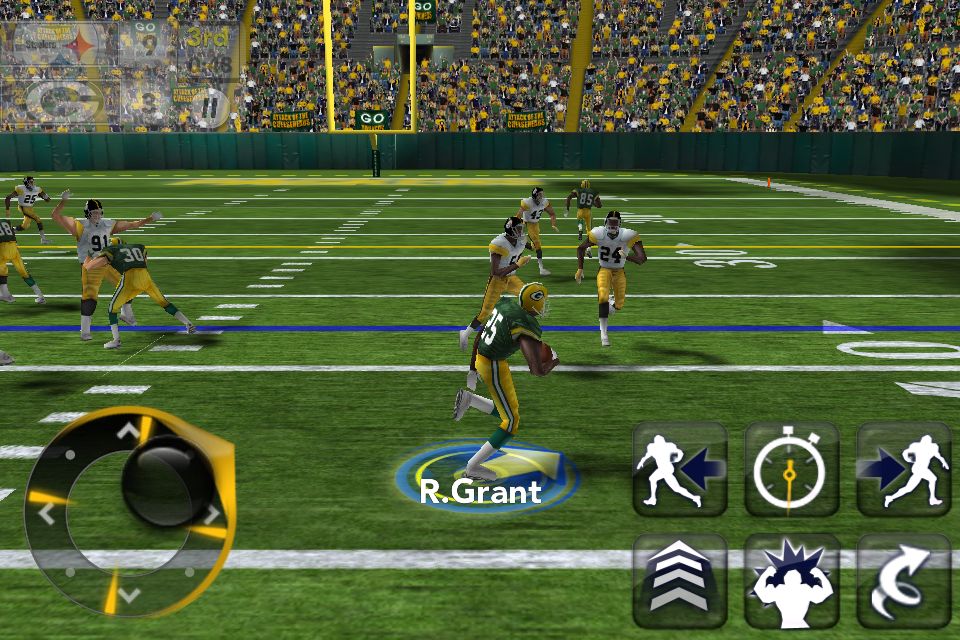 The second, rather interesting leaderboard is a larger affair. When you start the game, you’re prompted to select your favorite team. Every victory you earn in the game goes as a point to your team, and all 32 teams’ collective totals will be prominently displayed on this leaderboard. It’s a neat addition and could lead to some people playing obsessively to bolster their favorite team’s score, unless their team is terrible, with no fan base and looking at their paltry collection of wins makes them depressed. For example, Jacksonville Jaguar fans — finally selling out your home games last season isn’t enough to keep you from relocating to L.A.

The feature in the game I was actually most excited for, I didn’t get to see. Last year’s game saw an addition post launch called “Vintage Voltage Football,” which plays like those old tabletop electronic football games, where you set your pieces on the field before each snap and then let them go at it. Vintage Voltage will be included in Madden 12, and honestly seems like a more appropriate use of the device.

The mobile version of Madden 12 is said to be aimed toward hardcore and casual Madden fans alike, yet, despite my (unhealthy) obsession with football and my love/hate relationship with the series, I just can’t see myself actually wanting to play it. That being said, I’m sure the market is there, and there seem to have been enough noticeable improvements to warrant a purchase by anyone who loved or enjoyed the last iteration.