As I brought up the 2009 Sci-Fi film Moon, Tiger Style co-founder Randy Smith’s eyes lit up. He’s a big fan but he stops short of citing it as an influence on his latest game, Lost Mars.

Intentional or not, the ties between the two are noticeable: both deal with astronauts stranded on a planet, fulfilling a solo-mission within a story that has more in common with a Discovery channel documentary than Total Recall. Considering that the last time I explored Mars in a videogame I was smashing buildings and people with a giant hammer, Lost Mars offers a welcome change of pace and atmosphere. 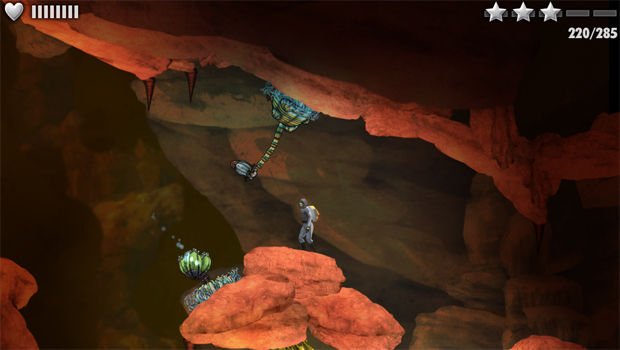 In contrast, Tiger Style’s follow-up, Lost Mars, is a game brimming with ideas, systems and a more traditional approach to storytelling. Yet, it feels as unique in the crowded iOS market in 2011 as Spider was during the days of the App Store’s growing pains.

Based on Smith’s fascination with cave exploration and astronomy, Lost Mars places an emphasis on environmental navigation, puzzle solving and gardening. Now, before you get all Four Loko’d up and send Tiger Style an angry email about how they are bunch of sissies, you should know that this isn’t just gardening — nor is it space gardening, for that matter. We are talking about ACTION-GARDENING, mother f*ckers!!! 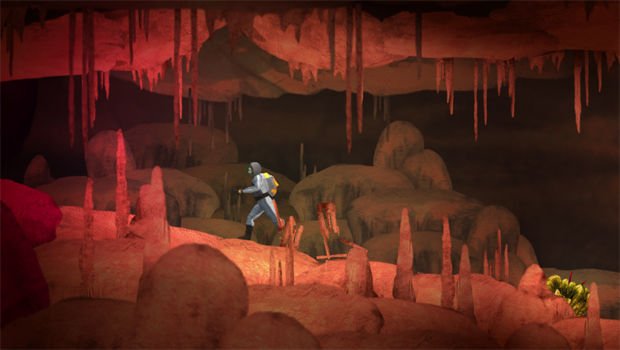 From the Thief series to their recent iOS release, Smith and Kalina make games with the word “emergence” in mind (you can tell because they say it a lot.) The way they tackled this element in Lost Mars is a large part of what makes the game unique. Instead of enemies and allies, the caves of Mars are populated with an ecosystem that is, for the most part, indifferent to your presence. Plants eat other plants, certain flora react differently to you and other lifeforms, winged-creatures nag you for delectable seeds and this all continues to happen even in your absence.

All of this is more than set decoration, however, since the goal of the game is to preserve and expand life, like a true space tree-hugger. You can deal damage as well (sans flamethrower and hedge-clippers), but this behavior is counter-productive to your goal of raising each area’s biomass. By planting seeds and helping out the flora and fauna, you’ll gain points and increase your star rating. Three stars are needed to proceed; five stars are needed to be a super-awesome person who plays videogames. The latter is a bit harder than you might think, but with the right tools and strategy it’s possible. 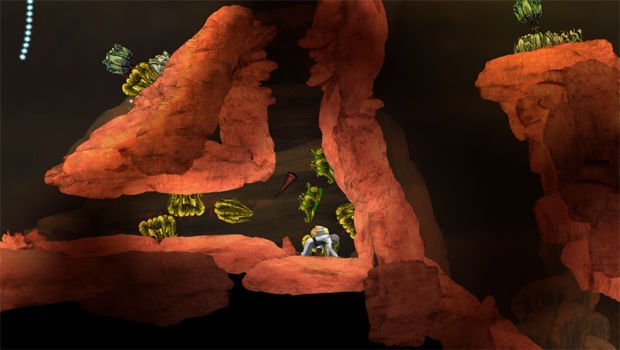 Although you’ll only meet a couple lifeforms in the beginning, you’ll eventually blast (via jetpack) your way through populated areas that appear to be bedlam at first. All sorts of freaky-ass plants are spraying out water, acid and seeds at you. Figuring out which plants and animals get along with each other is made easier by a gradient difficulty curve and an encyclopedia that helps you keep up with the creatures, as well as feed your brain with edutainment.

Tiger Style aims to sidestep the inherent repetition of seed-planting by adding varying hazardous conditions. However, at times I felt like I was playing Space Gardening Mama. Not a bad thing, but it remains to be seen how much the game’s scenery and challenge changes over the course of the adventure. Tiger Style were very tight-lipped about saying too much, so hopefully there will be some surprises in store.

Being that you are an astronaut and not a space marine (shucks), you are only equipped with a jet pack at the beginning. But, what swell jet pack it is! You move across the screen by pointing where you want to go; something that became quickly manageable for even an iPad newbie, like myself. You throw seeds in a similar manner, by tapping on the designated growing spots. My only complaint is that you can’t do both at the same time. Being able to zip around a stage, throwing seeds every which way, would be pretty rad — I’d be like Johnny “The Rocketeer” Appleseed. 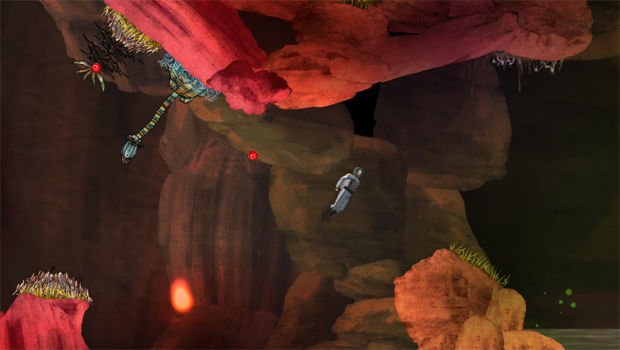 The world of Lost Mars is interconnected with many opportunities to backtrack and explore hidden paths, which unveil secrets of past Mars expositions. It’s a lot like Metroid, in that new areas open up and new tools/seeds are unlocked as you progress. It’s almost like a meeting point between a pure exploration title (Endless Ocean) and Metroid, with enough action to keep players on their toes. Later in the game, the player will be thrown in different scenarios that open up more aggressive play, such as dealing with a swarm of aggravated alien insects or escaping a collapsing area.

Lost Mars looks very similar to Spider, which shouldn’t come as a shock since it runs on the same in-house engine. Although the art is yet to be finalized, the overall aesthetic makes the world feel tangible rather than fantastical. It pairs wonderfully with its music that is part chiptune, 70s sci-fi score and Sierra adventure game soundtracks. The entire game feels like a world you can fall right into, inviting curiosity-spurred exploration and experimental play.

However, we’ll have to wait until later this year to find out if Lost Mars is truly more than Metroid for tree lovin’ hippies.