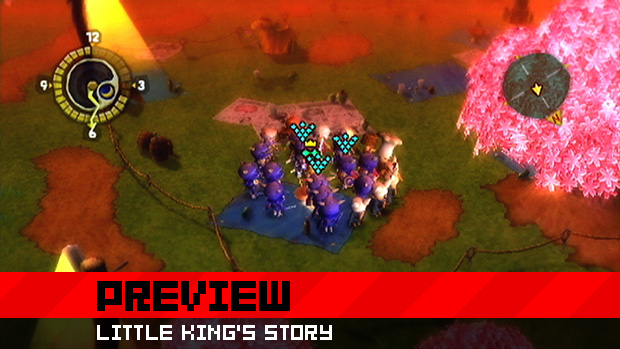 Gamers are control freaks (no pun intended). There’s something strangely alluring and satisfying about commanding a group of people who will do whatever the hell you want, whether it’s your squad in Rainbow Six, your Sims in The Sims, your minions in Overlord, or your grunts in just about any strategy game.

XSEED’s Little King’s Story tells the story of a little king and his subjects, any of whom you can recruit into a party of “followers” that you control. It’s a game that defies genre boundaries, encompassing elements of RPGs, RTSes, life simulations, and action/adventure games. Little King’s Story is launching tomorrow in North America, and I got the chance to play it recently. Hit the jump to read about the game that plays like Pikmin on steroids. 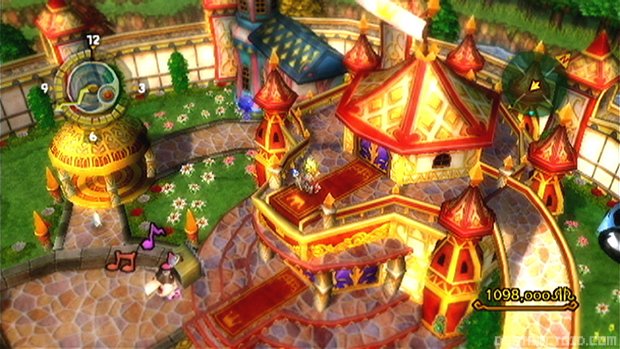 Little King’s Story has a high pedigree: its executive producer is Yasuhiro Wada (creator of Harvest Moon) and its lead programmer is Youichi Kawaguchi (Dragon Quest VIII). In addition, Final Fantasy XII art director Hideo Minaba designed the game’s characters. But Little King’s Story is a cute, charming, and immense title that doesn’t need to rest on mere name recognition or “from the makers of” credits. Don’t let its look fool you — this is no kids’ game. It has countless layers of depth; I spent about a half hour with it, and it was obvious that I only scratched the surface of all that it has to offer.

You play as Corobo, a lonely little boy whose life is about to be transformed. He finds a strange crown that gives him the ability to command any person he comes across. Upon discovering the crown, Corobo is accosted by a knight-errant on a bull, Howser, who informs him that he is now king of his village. Howser becomes your closest advisor and the main impetus for your kingly tasks. You begin the game in a building that could barely be called a shack, and your village, Alpoko, is tiny. As far as you know, this is the entire world — but as you progress through the game, you come to learn that there are seven other kingdoms, and Howser eggs you on to conquer those lands and make them your own. 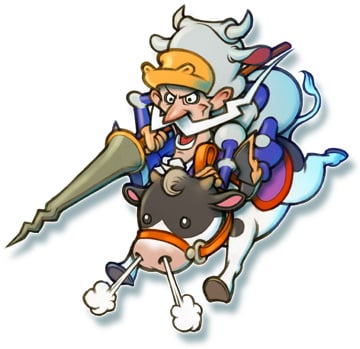 Howser, as you can see, is a wonderful caricature of Don Quixote. His steed is a bull named Pancho (which I’ll assume is a portmanteau of Sancho Panza) rather than the horse Rocinante, but he’s got Quixote’s classic facial hair and lance (though I didn’t see Howser tilting at any windmills during my play time). XSEED’s Ken Berry, who gave me the demo, seemed to intimate that Howser has some nefarious motives, so that’s definitely a subplot to keep an eye on.

But the main story focuses on you and your conquests of the varied kingdoms in the area, each of which has a unique king who ends up being a boss. Berry noted that the game is “pretty twisted” in some ways, earning its ‘T’ for Teen rating — for example, one of the rival kings is a “full-on drunkard,” and as one of his attacks, he vomits on you. Berry also mentioned that the entire game comprises about forty hours of gameplay — aside from the takeovers of other kingdoms, there are 100 randomly generated side quests for you to attempt. Like Harvest Moon, the game has a full day/night cycle; some events only take place at night, and some quests will have a time limit (e.g., “complete this task in X days”).

As king, you can recruit any of Alpoko’s residents into your party (you start out with a capacity of five, but by the end of the game, you can have up to thirty followers). This is where Berry drew a comparison to Pikmin, where the player, as Olimar, commands colorful little Pikmin. But Alpokans (yes, I just made that up) are unique individuals; each of your followers has a name, attributes, and life of his or her own. They’ll earn their own experience, too. Followers can even fall in love — you’ll get a message saying, for example, “John and Katie fell in love,” and if you send them into the chapel, they’ll get married and eventually have children (who can be recruited by you). 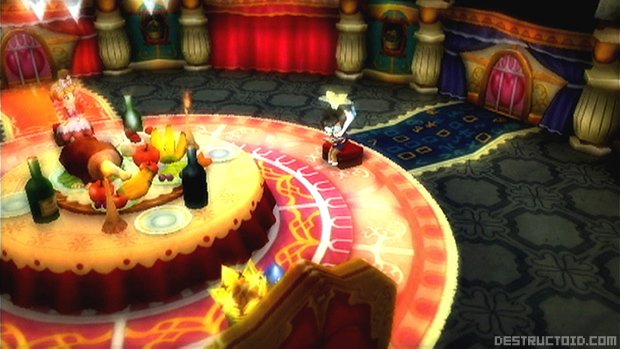 Alpoko has a well-designed division of labor. The basic gameplay consists of trudging around with your followers, who fall into a wide variety of highly specialized classes. You’ll utilize Carpenters, Soldiers, Farmers, and Chefs, among others, for tasks like fighting, unearthing treasure, and construction. You can only issue commands to one follower at a time, even though you’ve got a whole group of them. Early on in the game, you’ll build training centers, and sending someone into a particular one will change their class. As you complete quests, you’ll earn money, which can be used to build training facilities for new classes and defenses for your growing kingdom.

Combat in Little King’s Story plays out like a real-time strategy game. You can send any number of your followers toward a targeted enemy, and they’ll do their best to take the baddie down. If you see that you’re getting massacred, you can have them retreat. The game’s enemies are called UMA (OO-muh), or “unidentified mysterious animals,” and there are many different kinds of them.

All RTSes demand micromanagement, and that’s a skill you’ll need in combat here, too. Soldiers are great for close combat, but I tried to take on a boss with eight of them and died quickly. It was only after I built a training facility for Animal Hunters (archers) that I was able to defeat him by sending in soldiers while firing arrows from afar as well. A neat effect I noticed was that your followers will age visibly as they take damage. If they die in combat, you’ll have to pay death benefits to their families, but usually, they’ll wash up the next day on a “mysterious” local beach (yes, a lot of stuff in this game seems to be “mysterious”). Sometimes, though, they’re dead for good, and you’ll see their family members walking solemnly, dressed in black, on their way to the funeral. 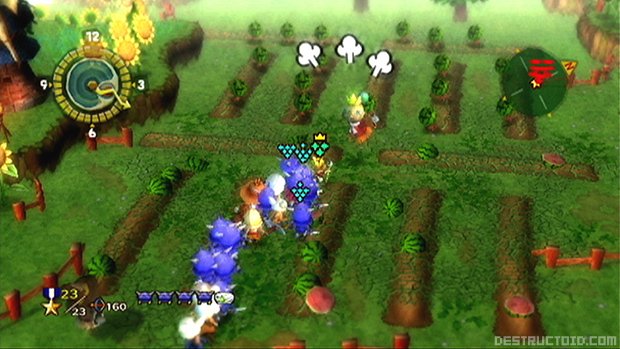 Exploration is a major part of Little King’s Story, too. A lot of the world will be closed off to you initially, but it’ll open up as you play through the game. For example, you might find your path blocked by a large tree; you won’t be able to get by it until you unlock the Lumberjack class. Later in the game, you’ll gain the ability to fast travel — via cannon — to previously visited locations.

The game has beautiful visuals. Everything glows with a halo that gives the game a “warm” look. But what awed me were the gorgeous stylized cut-scenes. After completing a quest, you’ll be treated to one of these wonderful scenes, which appear as if they were etched with colored pencils. They might explain something new you’ve learned in the quest, though they’re subtitled — the game’s characters speak an unintelligible, made-up language (like in Shadow of the Colossus or The Sims). 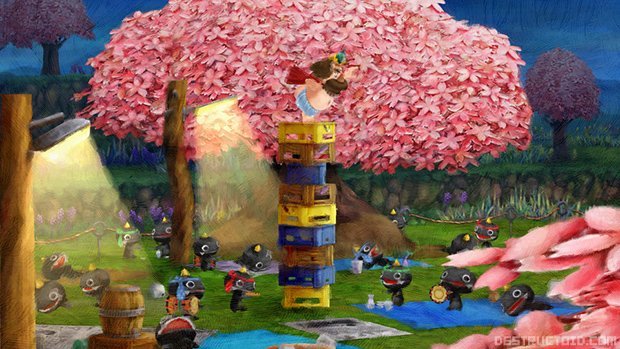 There’s much more to Little King’s Story than meets the eye. On the surface, the game’s story seems simple, but with factors like the “mysterious” animals and the strange beach of respawning — as well as an Alpokan astronomer who continually warns that the sky is falling — it appears that Little King’s Story will require a great deal of exploration and time. Control freaks can get their hands on the game tomorrow; be on the lookout for the full Destructoid review from Jonathan Holmes.