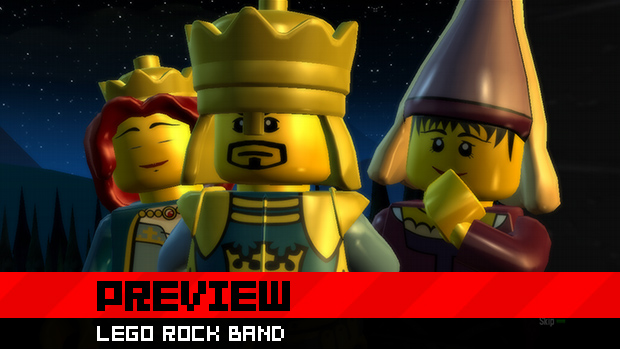 When Harmonix and Traveller’s Tales announced LEGO Rock Band back in April, the Internet went a bit crazy, charging that Harmonix had finally joined Activision among the ranks of the money-grubbing sequel-makers of the world. Granted, the mash-up seemed to come out of left field — a LEGO-infused Rock Band game? Really? The connection between the two, not to mention the reasons for the game’s existence, seemed tenuous and dubious at best, respectively.

But then, people got a whiff of the game’s varied soundtrack, spanning profanity-free classics like Tom Petty’s “Free Fallin’” and the Ghostbusters theme, and they started to come around. Until now, though, we’ve been unclear as to exactly what LEGO brings to Rock Band, aside from miniature, blocky versions of rockers like Iggy Pop and David Bowie. I’m here to tell you all about it — I saw a demo of LEGO Rock Band at MTV HQ in Manhattan last month, and I came away with the realization that a family-friendly game doesn’t necessarily have to pander to kids.

Many of the gamers decrying LEGO Rock Band are instinctively hating on what they perceive to be a “kids’ game.” Some people have answered the folks railing against LEGO Rock Band by saying that the game’s not for them. But Harmonix PR guru John Drake says that both groups are “missing the point.” Yes, Warner Bros. and MTV are marketing the game as “family-friendly,” but that includes everyone, people — LEGO Rock Band offers a wide enough variety in its track list to sate the desires of your 13-year-old Shrek 2 fan as well as your classic rock-loving dad. Just like all the other Rock Band games, this will be a hit whenever and wherever people are hanging out, whether your kid is having a slumber party or you’re having some buddies over for a few beers.

As for the LEGO side of things, Drake told me that “We’re doing a couple of things to keep it distinctly LEGO and distinctly Rock Band, but they are also two great tastes that taste great together.” (Yes, he actually said that.) At its core, LEGO Rock Band is a Rock Band 2 re-skin, but Traveller’s Tales has done a great job of infusing the music game with the tried-and-true LEGO charm, which you may be familiar with from games like LEGO Indiana Jones and LEGO Star Wars.

The story mode retains the same basic career progression of Rock Band 2 — you’ll play songs to earn “money” so you can buy better vehicles to get you from gig to gig — but the developers wanted to provide some context for playing the songs. Drake posited that kids might not understand why they’re playing the music, even though they’re having fun doing it. So when you begin the career mode, you’ll see a funny, cute cutscene featuring your customized LEGO characters (the game includes the full Rock Band 2 character creator) where you’re auditioning potential additions to the band. An octopus blows all the other drummers away, but apparently, you discriminate against sea creatures, so you have to turn him away. (This plays a part in the story later on, of course.)

Instead of earning cash, you accrue LEGO “studs” (the circular pegs that make LEGO blocks stick together) while playing songs. It’s important to note that you can’t actually fail a song in LEGO Rock Band, regardless of the difficulty you’re playing on. If you miss too many notes, you’ll just lose all the studs you’ve amassed, but the song won’t end; it’s a bit like rings in Sonic games. In fact, you’ll have an opportunity to earn back the studs you’ve lost by hitting all the notes in a phrase.

However, you can fail songs as usual in the game’s “Rock Power Challenges.” These are special sequences that are tied to story events, like the octopus I referred to earlier. He’s enraged that you’ve rejected his eight-armed drumming, so when you sail to the Jolly Rocker pirate ship venue — on a speedboat that you’ve purchased with studs — he brings his (much bigger) dad along to end your maritime performance. After another cutscene that evokes a children’s cartoon, you’re tasked with using “the power of rock to defend the pirate ship and blow these suckers away” in the “Rocktopus” challenge.

The songs that you play in each Rock Power Challenge are at least tangentially related to the theme of said challenge — for instance, one of the Rocktopus songs is Sum 41’s “In Too Deep” (get it?). Again, these story sequences give you a reason to rock out; others in the game include bringing down a construction site and getting rid of ghosts in a haunted house. If you don’t feel like making your way through the story, though, all 45 songs are available in Quickplay from the start, no unlocking necessary. (And they can all be exported to your PS3 or 360 hard drive for $10.)

Unfortunately, since LEGO Rock Band was made after development on The Beatles: Rock Band had begun, it doesn’t include the user interface tweaks and improvements that showed up in Beatles. There’s no unpause countdown, no indication of a part’s difficulty on the instrument select screen — Drake explained that with this game, there was a desire to streamline the interface as much as possible and leave out any potential clutter. On the plus side, though, the game offers abridged versions for many of the songs, so if your kid is playing “The Final Countdown” for the sixth time in a row, you can end the torture sooner. And a “cheat” in the options menu can have the game automatically play the drum kick pedal for you, which is great for disabled gamers (or people who can’t quite coordinate their limbs).

In addition, a new difficulty setting is available: Super Easy. On guitar/bass, you’ll just have to strum in time with the notes without having to worry about which buttons you’re pressing, and on drums, you can hit whichever pads you want, as long as you’re getting the timing correct. Of Super Easy, Drake said, “We’ve been working on this Super Easy mode for a while. We’re glad to roll it out in LEGO Rock Band — it feels like an appropriate place to bring it to the rock gamers and their 10-year-old[s].”

Finally, the game will have its own Music Store, which will only show family-friendly content (more details here). Drake stressed the selection of artists as the game’s strong point, saying that having Jimi Hendrix and Queen in a so-called “kids’ game” proves that it’s not a kids’ game. You’ll be the judge of that this holiday season.