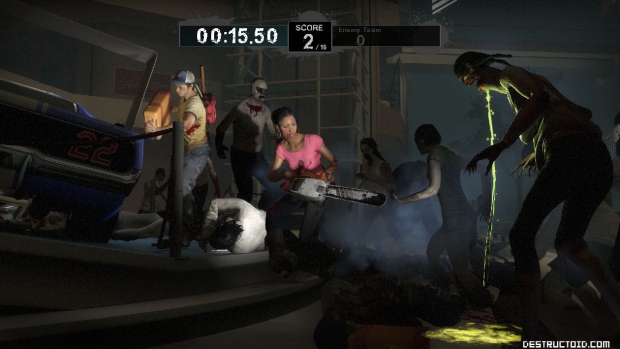 As you found out late last night, Valve unveiled the new Scavenge mode for Left 4 Dead 2. It’s a interesting new game mode aimed at players looking for a quick fix of zombie killing. In fact, a round in Scavenge can go by so quick, that I didn’t understand why I was already switching sides during my first match.

Before checking out Scavenge mode, we also got to try out versus mode on Dark Carnival. New infected models were seen, there’s a cool Easter Egg at the carnival, the Spitter wears a pink thong and you can learn more about Left 4 Dead 2 after the break.

First up, I played some versus mode on Dark Carnival. The Survivors start off outside next to a car on a road filled with busted up cars. New weapons, such as the powerful assault rifle and new pistols, await you at the start and once you’re ready, you need to head towards the carnival. You need to get through a back-road blocked by cars, make your way to a motel, go down a steep cliff, cross a river and then climb a hill where the first safe house is located at.

We couldn’t even make it to the first safe house so we sadly never even got a chance to see the carnival itself. A shame, especially since I just saw Zombieland and was looking for some more carnival/zombie action. Plus, there’s a carnival game that you can actually play and win some kind of useful prize.

After playing as the Survivors, we switched sides and got to give the new special Infected a spin. The Spitter spits out balls of acid that leaves a pool of acid on the ground. The Jockey’s special sees him jumping on top of Survivors and taking control of the survivor’s movements. Rounding out the new Infected is the Charger. He sprints forward and only stops when he either hits a obstruction or tackles into a survivor. If you manage to tackle into a survivor, the Charger will then proceed to choke slam said survivor into the ground until they’re killed or saved. The new infected are pretty easy to kill like the other specials, and their recharge time for their attacks is pretty long with the exception of the Jockey. His is nearly non-existent.

The past infected have also received some face lifts. Most notable is the new female Boomer, who actually makes the Spitter look hot. The Hunter and Tank have a slightly new look and the Smoker has a giant disgusting tumor looking thing on his face now.

After a couple of rounds of versus, we got to jump into the newly announced Scavenge mode. It’s a new competitive gametype designed to be a short and frantic for players looking for some quick zombie killing.

Each game of Scavenge is made up of three rounds and the team that gets the most points as the Survivors wins. In the event of a tie, the game will award the team that got the most cans the fastest. There will be six maps for Scavenge mode and they’re all a variation on the campaign maps.

We played on the map called Motel, which is a section taken from the Dark Carnival level. There are 16 gas cans scattered across the level and the Survivors need to grab as many gas cans as they can to fill up a generator located in the middle of the motel. You have 120 seconds to fill up the generator and each successful fueling of the generator gets you a point and 20 seconds added to the timer. If the timer reaches zero but a survivor is holding onto a gas can still, the match will go on unless the survivor drops the can.

While the Survivors are trying to fill up the generator, the Infected need to do whatever they can to stop them. Survivors can’t fuel the generator while getting attacked and the Spitter can actually cause the gas cans to erupt in flames. Survivors can also accidentally set a can on fire with their guns but gas cans do respawn so it’s not a total loss if they go up in flames.

Scavenge is very satisfying addition to Left 4 Dead. It goes by so quick and is perfect for players looking for some fast paced zombie killing action. The gas cans were pretty well spread apart to make it challenging for the Survivors and in this map, the Infected have a very big advantage as the generator is out in the open with minimal defenses.

On a final note, the melee weapons are so much fun. Going around swinging a sword, guitar and especially the chainsaw is so so so satisfying.