It was almost two years ago when League of Legends was first released and since then the game has received a cult-like following. League of Legends has helped cement the Multiplayer Online Battle Arena (MOBA) genre into videogaming. Now developer Riot Games is ready to introduce a new gameplay mode that hasn’t been seen in a MOBA before.

The new  mode is called Dominion and will see you defending and capturing points in order to defeat the opposing team.

For the uninitiated, MOBA style games combine RTS, RPG and tower defense gameplay elements in a highly addictive multiplayer setting. Critics say they make you click around a map until your hand festers from carpal tunnel syndrome. Nonetheless they are immensely popular especially in Europe and Asia, and in my home country where it is considered a national sport along with Counter-Strike.

What makes League of Legends not just another DotA clone, you ask? Well it makes vast improvements to the genre such as a new summoner system, more flexibility in setting up matches, a less steep learning curve and graphics that don’t make you feel like you’re looking at pixels through a magnifying lens. They also addressed in-game problems by giving incentives to people who don’t ragequit. Ultimately, while LoL is a game that’s highly replayable, you’ve got to admit that there’s nothing drastically new to it besides being more streamlined and customizable. 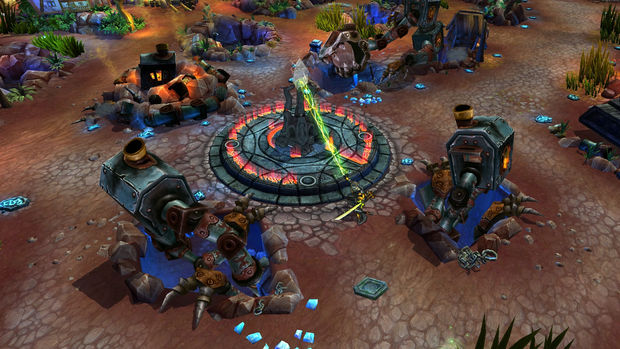 Riot Games has addressed this issue by introducing something entirely unheard of in the genre. Enter Dominion, the newest gameplay mode that overhauls the classic system to accommodate a more fast-paced, action-packed gaming experience. Instead of the typical destroy-the-enemy-tower scenario of the original, the game pits two teams against each other with the common goal of capturing the five bases around the map and to hold them as long as they humanly can. The team that has the most holds at any given time reduces the health bar of the opposing team, and the team that bleeds to death naturally loses the game.

Dominion is set on a completely different map called Crystal Scar, which is described as “a highly contested, war-torn mining village.” Crystal Scar is basically the neurotic younger sister of the original map, Summoner’s Rift. It has a haphazard, circular terrain that forces your team to be scattered and immediately go head-to-head with other champions as opposed to Summoner’s Rift’s linear, predictable three-lane map.

What emerges is a back-and-forth struggle between the two teams to gain dominance, and it is an adrenaline rush from the get-go. Anything can happen at any time, and the balance between the winning and losing teams is very tenuous, making cooperative play even more crucial. 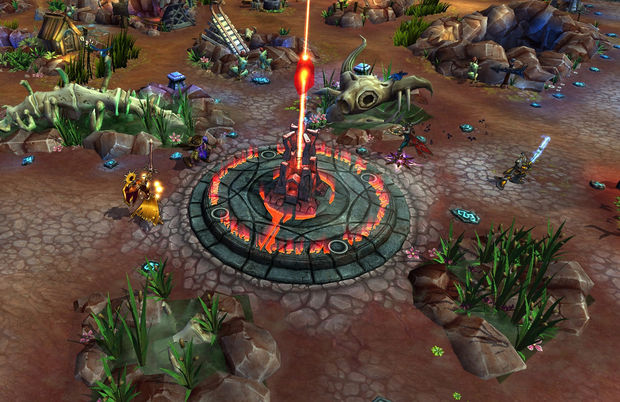 My experience of playing Dominion was as intense as I described. As someone who has played DotA only a few times, I know from experience that I pretty much suck. I admit there was some slight panic as I waited for the pre-game countdown to end. I had no idea what to expect, and this feeling of anticipation remained throughout the game. Everything was consistently happening so fast with a lot of scrambling from base to base and ninja keyboard hotkey action.

For my champion, I used Ashe, one of the more popular characters because of her, uh, considerable assets — such as how she deals high-damage ranged attacks with abilities that slow down and stun the opponent. Naturally, to offset these good things going on for her, she has a tendency to be as weak as a kitten, so it helped that there were new stations around that adds points to my health along the way.

Dominion changes things for me in the sense that I might not be a godlike killing machine, but I can play in a different way than before and that makes me suck less. I can pretend to be a hero and run from base to base in an attempt to capture them. This might be more probable if I were playing a more robust tank-like character. Ideally for a character like Ashe, I can go with teams and play a support role and simply strike down foes and hold bases. With how the game is set up, it is highly likely that players can go on one-on-one battles with other players or alternatively arrange mini-skirmishes around the map. 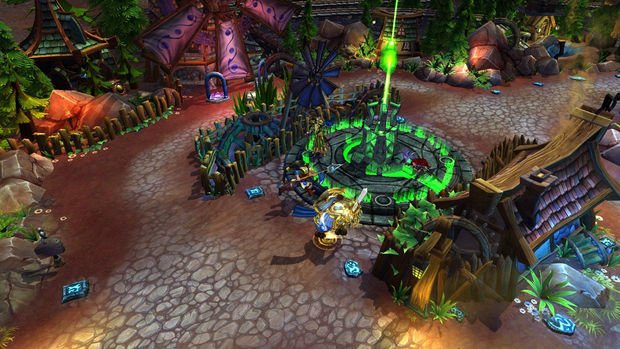 There seems to be a more significant push for team gameplay elements in Dominion, and this was confirmed by Ryan Scott, Lead Champion Designer on LoL. We were able to sit down and talk to him, and he explained how the ranking style in Dominion differs from the classic game.

What they came up with is a little something called the renown system. According to Ryan, it offers incentives for being a team player rather than just being a bloodthirsty player killer. It is okay to be that guy who gets killed all the time as long as he helps the team win. They want to develop a system that encourages “heroic moments, team play and epic kills.” It makes sense for Dominion to do this too as this seems to be the direction a lot of multiplayer games are heading.

This new game gives players new opportunities in terms of PvP battle and strategic team playing. And with almost 90 playable characters in League of Legends’ arsenal plus the customizable runes and spells already existing in the game, just imagine all the in-game variations that can come up.

The best thing about this new mode is that it’s also going to be offered for FREE. Thank the benevolent gaming gods! Interested parties can try it out at the upcoming PAX and gamescom shows. Until then, sit tight for further announcements.