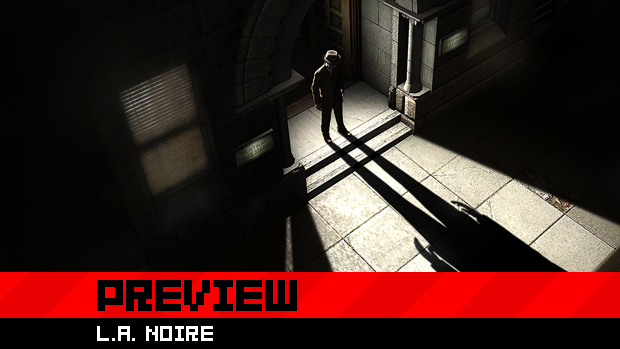 Until last year, Team Bondi’s L.A. Noire had been something of an enigma. Since it bears the Rockstar name, many assumed that it would simply be a Grand Theft Auto-style adventure set in 1940s Los Angeles instead of the ’80s, ’90s, or the present. After watching a half-hour demo of the game at PAX East, I can say that while it shares some elements with Rockstar’s previous crime thrillers, I’ve never seen a game quite like this before.

Will you be driving around an open-world city and shooting people in L.A. Noire? Yes, but that’s not the focus. I used the word “adventure” earlier, and in fact, that’s what stood out to me in the demo. This game retains some of the familiar trappings of GTA, but at its heart, it can perhaps be best described as an evolution of the classic point-and-click adventure game. 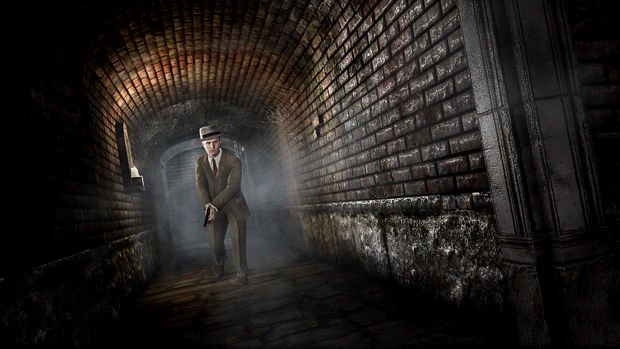 “We want to give players the opportunity to experience what it’s like to be a detective,” explained the Rockstar PR representative who showed off the game. In L.A. Noire, you are not an agent of chaos; you are Cole Phelps, a Los Angeles Police Department officer, and you have to act the part. Should you attempt to go on a vehicular killing spree, pedestrians will do their best to get out of the way of your car, and if you manage to mow enough of them down anyway — or wreak havoc in other ways that would be considered unbecoming of an officer of the law — the game will eventually stop you in your tracks and force you to return to an earlier save game.

Phelps is a war hero, having earned a Silver Star at the Battle of Okinawa, but he’s not entirely proud of his service in World War II, and he decides to join the LAPD in 1947 to try and atone for some of his past. You begin the game as a beat cop, and the department eventually promotes you to detective, which is when you start to investigate some headline-making cases. I saw one such case, “The Red Lipstick Murder,” which is the first one that you work upon being brought to the homicide desk. (Cases are assigned from one of four desks: traffic, vice, homicide, and arson.) You’ll play through more than 20 cases that range in length from 45 to 90 minutes; while each one is a self-contained story, the four desks also have their own arcs, and the game offers an overarching narrative for Phelps as well. 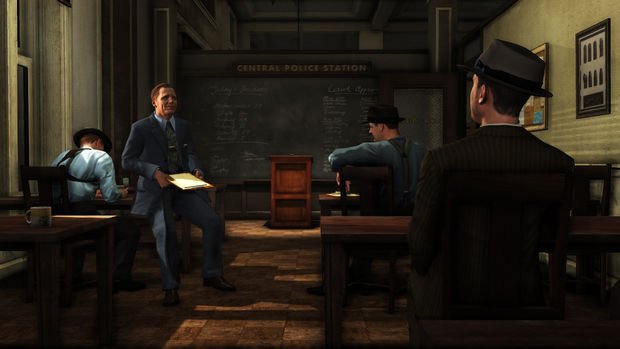 Many of the cases in L.A. Noire take inspiration from real-life crimes committed in Los Angeles during the ’40s, such as the infamous Black Dahlia murder, which gets mentioned in the game and serves as a backstory of sorts for the homicide desk. Before each case begins, you’re treated to a short vignette of the crime itself, in the vein of Law & Order: Criminal Intent. Your superior officer at homicide is an Irishman who isn’t named Captain Dudley Smith, but might as well be; he notes that the murder in the Red Lipstick case bears the hallmarks of a serial killer called “The Werewolf.” It’s up to you to solve the case, figuring out whether it’s indeed the handiwork of The Werewolf or just a copycat. You’re assigned a partner, Rusty Galloway, a gruff, middle-aged detective, and the two of you head off to the crime scene.

Eight square miles of postwar L.A. have been recreated in L.A. Noire, but I didn’t get to see much of it, since Rockstar skipped the driving in my demo. The rep mentioned that among the gameplay elements you’ll come across in the city are unassigned cases. These mini-cases will “pause” your main case, since you can only concentrate on one mission at a time; the side missions take five to ten minutes to complete.

A gruesome scene awaits you at the site of the murder. After Galloway tells the vulture-like reporters to “scram,” and you talk to the cop who found the body on his lovers’-lane beat, you walk over to the crime scene. A woman is lying on her back, stark naked, on the grass; a few phrases scrawled on her body with crimson lipstick catch your eye immediately. Clearly, this is a game for mature audiences — there’s nothing “hot” about this sequence, unless you’re a necrophiliac. 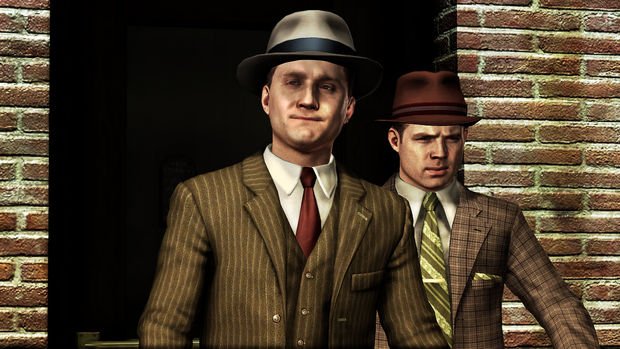 Here, you can examine parts of the body more closely — apparently, cops in the ’40s hadn’t yet started to use gloves in their investigations. Turning the head reveals that it’s basically been caved in; the medical examiner notes that the blunt force trauma was likely the cause of death. Looking at the hand, you notice a bruise on the victim’s finger; it appears that something was taken from it, probably a ring. After completing your examination, you begin to explore the immediate vicinity of the body. As in Heavy Rain’s crime-scene sequences, many of the items you’ll come across have no relevance to the case, while others are clues.

You find some lipstick, but the tube is new, so it couldn’t have been used on the victim. Then there’s a small brass globe. It requires some manipulation in a puzzle to unlock its secret: the item is a lighter from the Bamba Club. All of the clues you find, along with locations you visit and people you speak with, are catalogued in your notebook. Since this is your first homicide case, everything is relatively easy to find at the crime scene, but if you get stumped later on, your partner will point things out to you.

Once you’re done, you head to the Bamba Club with Galloway, where you question the bartender and owner. The barkeep identifies the victim as Celine Henry, and McColl, the owner, knew her. The interrogation sequences are where the game’s vaunted MotionScan technology really shines. The face of every single character — over 400 in total, including random pedestrians — was put in the game with MotionScan, and it’s hard to hold back hyperbole in discussing the results. You’ll need to read people’s faces in order to ascertain whether they’re telling the truth, and you can actually do that. It’s uncanny. 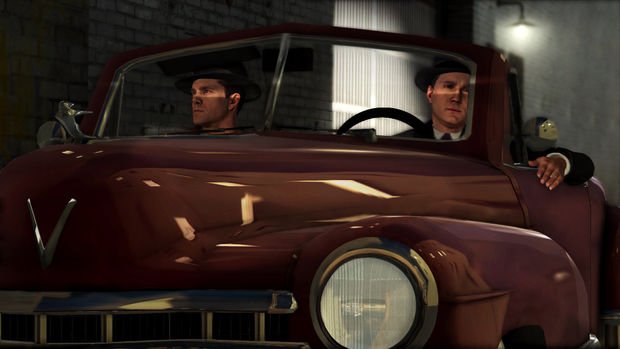 After each line from a person you’re talking with, the game presents you with three options. If they stare unflinchingly into your eyes, you can choose to take the individual at their word (“truth”). If their body language suggests that they’re withholding some information — perhaps with shifting eyes — but you don’t have any proof to contradict them, you can challenge their statement with “doubt.” And if you have evidence in your notebook that invalidates what they’re telling you, then “lie” is the way to go.

The questions that you can ask will vary, depending on the evidence you’ve collected so far. There’s no way to “fail” an investigation — unless you die, the game will always move forward, even if you’re not making the “correct” choices in an interrogation (doing that will just open up different lines of questioning). Each case has a “highest efficiency” solution, but if you don’t obtain certain clues, you’ll just have to solve the case in a more roundabout way, talking to more people or going to new locations.

When you ask McColl if he thinks that Mrs. Henry’s husband, Jacob, killed her, he says no in an offhand manner. But he sits with a furrowed brow, biting his lip; you get the idea that he’s not being entirely straight with you. So you doubt his words, and he gives you some important information by the end of your discussion. Before leaving the club, you call in to the station, asking the secretary to look up the license plate that McColl mentioned. Then you and Galloway leave for the Henry residence. 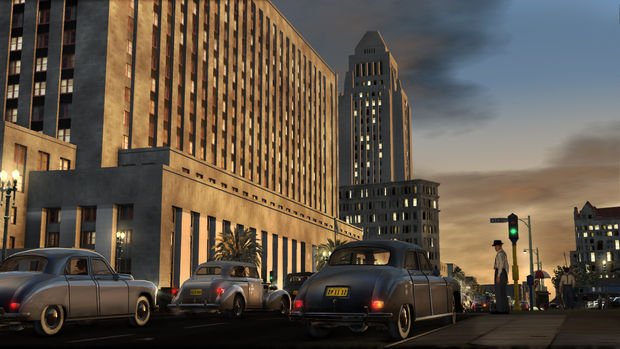 After discovering that someone broke into the house, you head inside and look around. There’s an “investigation theme” that plays during these sequences; piano chimes hint at items to explore, and the music ends once you’ve found everything. You then decide to speak with a neighbor, Jennifer, who is stunned to hear of Celine’s death and recounts some of the events of the previous night. Apparently, Jacob and Celine fought; he hit her in the face and left, and she then got soused before driving off to the Bamba.

From here, you drive over to Jacob’s apartment, where you pull out your guns before kicking in the door. Jacob appears astonished when accused of Celine’s murder. The rep pointed out that some characters are better liars than others, so if you’re having a tough time figuring things out, you can use Intuition Points (earned as you rank up in the game) to remove one of the three choices, or try the Rockstar Social Club to see which answers other gamers have chosen. Jacob claims not to know some things that you know he knows — thanks to your handy little notebook — so you call him out on his lies.

Galloway taunts Jacob, which leads to a fistfight between you and the suspect after he slugs your partner. Since everything from the neck down in L.A. Noire relies on standard motion-capture techniques, there’s a jarring disconnect between the utterly realistic facial animation and the comparatively ordinary body movement. The fight looked like hand-to-hand combat from an average videogame, but I did like the fact that Phelps’ fedora popped off when Jacob punched him. 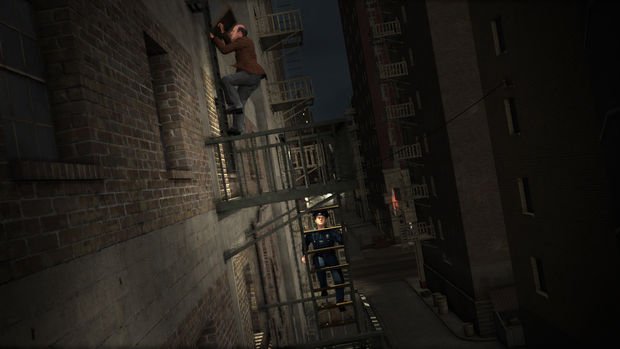 The demo ended after Phelps subdued Jacob. The fight, which lasted less than thirty seconds, was the only true bit of videogame “action” in the entire demo. The PR rep said that Team Bondi is trying to provide a realistic experience, and L.A. Noire seems to be a true detective simulator. It doesn’t try to gussy up the job with unnecessary action sequences; since using his gun is always the last resort for a real cop, Team Bondi wants those moments to be rare and special for you.

Instead, L.A. Noire trots along at a very deliberate pace, with few “gamey” conceits. A real detective needs a keen eye and a meticulousness about him; you’ll have to take your time exploring crime scenes and use your brain — along with the evidence at hand — to solve cases. As Phelps, you have to be a good guy, but between the variety in crime-scene investigations and witness/suspect interrogations, this game may turn out to be more legitimately open-ended than any Rockstar game before it.

Filed under... #Destructoid on assignment#PAX#Rockstar#Top Stories