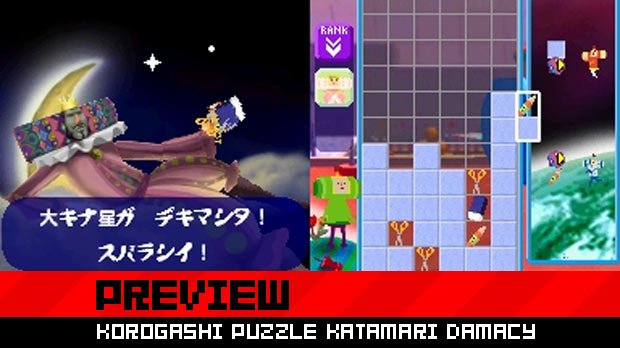 Great. Another falling block-style puzzle game on my DS…or now my DSi. Don’t we have enough of those already? Meh. This looks just like Pac-Attack anyway.

Wait? Is that the Prince from Katamari Damacy?  And he’s rolling up things in between the puzzle pieces? And there’s kooky music? Well, that changes everything!

This 500 DSiWare point puzzle game (about $5) has you controlling the position and rotation of falling blocks and other attached junk before it hits the bottom of the screen. But making rows of blocks to “clear” isn’t really the point in this game. The miscellaneous junk that falls from space, like scissors, buildings, food, pets, and just about anything else, is the real focus here. You’ll want to organize blocks and said junk so that everything non-block can easily be rolled up by the prince and his katamari ball. Prince and his ball will appear randomly as a playable piece. Drop him in and he’ll roll everything up, sending the whole mess to the King of Cosmos, where he’ll throw it into the sky.

If you’ve played Namco’s older puzzler, Pac-Attack, you’ll definitely see some similarities here. The junk replaces Pac-Attack‘s ghosts, though. And the control is different: available clusters will appear and float upward in a bar on the right hand side of the screen. You’ll use the stylus to grab and drag these pieces onto the game board, working to move them before they are sucked up in a black hole at the top of the screen. Should they go into this hole, they’ll be dropped onto the board in a place that might not be optimal for you. When the katamari ball appears in this bar, it will come with a directional marker, indicating left or right rolling. You’ll want drop the ball in the right place for the right direction to make sure it rolls up all of your junk before the pile hits the top of the screen. If done right, you’ll get that familiar rainbow barf!

There are two main game play modes in Korogashi Puzzle Katamari Damacy: Endless and Challenge. Endless lets you do the standard puzzle game thing, dropping pieces and clearing them, as you try to see how long you can last as the difficulty increases. Challenge gives you preset goals, like clearing five rows of blocks at the same time, or rolling up a katamari of 45 dogs. You’ll have to perform these challenges within the King of Cosmos’ set time limit, which is just barely long enough to accomplish the given task. Usually, these challenges are more about figuring out the right combination of pieces from the ones given, being less random than you’d imagine. Each challenge is actually more like a brain teaser than anything else, with the difficulty increasing the more you progress through space.

The word is that Vocaloid’s Hatsune Miku sings the ending song, but I wouldn’t know. The game is hard, and I suspect that I’m only half way through now. As for the other songs, they’re just the same old Katamari Damacy songs that we already know and love. I still enjoy all of the tunes from this overused soundtrack, but it would have been nice to hear something new here.

As it stands now, Korogashi Puzzle Katamari Damacy is my favorite DSiWare game, though that’s not saying much right now. Why? I find the challenge aspect of the game to be addictive, and the whole dragging and dropping control scheme really works for me. Plus, it’s Katamari!

Again, we think there’s a pretty good chance of Korogashi Puzzle Katamari Damacy coming to the US DSiWare store. For now, you’d need some Japanese knowledge to get the requirements of the Challenge stages, but these would be easy to translate. Other than that, only the King of Cosmos’ speech would need to be translated. They could do this translation quicker than I could finish some of the game’s later challenges. My guess? Namco Bandai is already on it.

Puzzle fans, you’ll definitely want to check this out if (or when) it comes out here in the US.