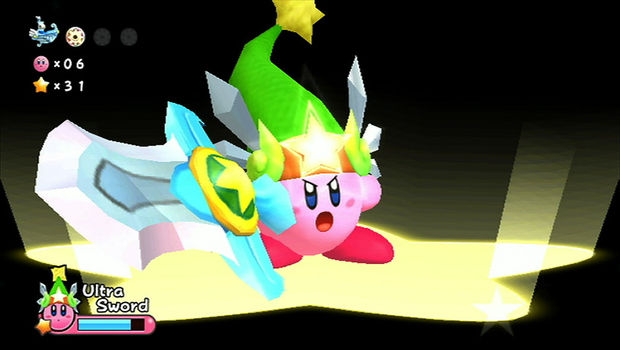 Finally, that little pink puffy character with the suction power of a Dyson will have his first adventure for the Wii in the style of the old school games. Sure, there was Kirby’s Epic Yarn, but Kirby Wii (working title) is all about the consuming and gaining of new powers.

I had the chance to to check out a few of the levels the other day and from what I played, Kirby Wii is looking really good.

The story begins in Kirby’s world as Kirby, Meta Knight, King Dedede, and Waddle Dee are taking a leisurely stroll through the colorful landscape. Then BAM! A giant alien spaceship appears from a rip in the space time continuum and crash-lands in a nearby field. The team rush to the ship where they find a lone character lying unconscious on the floor. He wakes up and is in dire need of the hero’s help to repair his ship. The team agrees to help and travel all around Dreamland to find all the parts of the alien’s ship to help him return home.

While we couldn’t go into specifics about the story, there is the possibility that this “friendly” alien could be a total bad guy using Kirby to do all the legwork so he can take over Kirby’s world. That’s my theory anyway and hey, it has happened before (See Milky Way Wishes.)

You can play Kirby Wii all by yourself, but up to three friends can join in at anytime to work together in co-op. Other players can drop in and out on the fly and friends can play as either Meta Knight, King Dedede or Waddle Dee. Co-op buddies just hit a button to join into the game in progress and if the person needs to pop out for whatever reason, they can just drop out without affecting the main player. All the players share the same number of lives so if a co-op buddy dies, Kirby will lose a life. If Kirby dies, then the entire team will have to start off back at the beginning of the level. 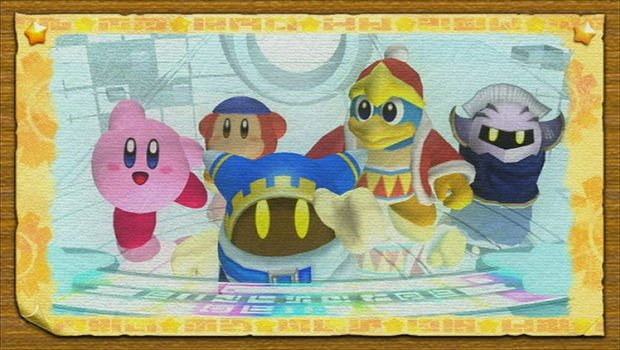 Kirby will consume enemies to take their powers of course, just like the classic games. He can use his super suction to swallow a rattle snake, for example, and through a complex digestion process, a cowboy hat will appear on his head and give him a lasso fight enemies. You’ll want to strategize a little bit with the powers you consume in order to get all the items in a level or to help you find that elusive secret warp zone.

Among the varieties of different abilities both new and old are a new set of super power-ups. These new super attacks typically take out everything on the screen but can only be used for a limited period of time. The first of these new super attacks was the giant sword. Kirby can take one swing and eradicate everything on the screen, even certain land objects. My favorite super attack during my hands-on was the fire hat. Used normally, it bellows a short stream of fire to help you along your adventure. When it is powered up, the flame will change into a dragon made of fire and consume all the enemies on the screen.

Overall, Kirby Wii was plenty of fun. The incorporation of drop in and out gameplay is a must for those of us that have people at home that love the co-op experience. Also, I can’t wait to make people yell at me when I don’t give them a hug (a kiss?) to replenish their health.

Here’s more on Kirby Wii from our E3 hands-on time.