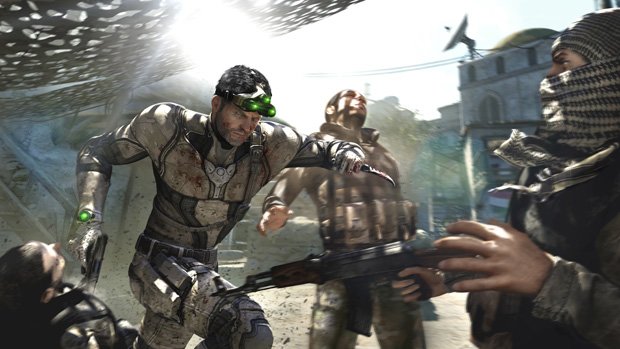 I’ve never been that big a fan of Splinter Cell, or at least the last-gen games that were clearly about stealth. There’s nothing wrong with stealth, but a demo of the first game never clicked with me, so it was always a series I ignored. Though I never got around to picking up the full game, a demo of 2010’s Splinter Cell: Conviction seemed much more enjoyable, even if it overhauled the game style. I totally understand the fans who want more stealthy Splinter Cell games, but for those who didn’t enjoy the classic approach, the new Jason Bourne style is far more interesting.

And boy, does Splinter Cell: Blacklist look fun. It continues where Conviction left off, putting you in the shoes of Sam Fisher (now looking and sounding different) as he continuously appears out of nowhere and wrecks up the joint. Several countries have gone rogue, upset at the presence of US in many foreign countries. They’ve formed The Blacklist, a group of terrorist organizations demanding the withdrawal of US troops immediately. My hands-off demo covered much of the footage shown at Microsoft’s E3 press conference, so I’ll highlight the new bits you may not be aware of.

The demo begins at the Iraq-Iran border, with Fisher disguised as an enemy soldier carrying a dead body. Soldiers usher him into a tent so that they can treat the body, but one of them glances suspiciously at Fisher. As he walks over, Fisher uses the “mark and execute” system to mark two of the men. When the soldier is about to attack, Fisher takes him hostage and instantly kills the two men he’s marked. He tries interrogating the remaining soldier, but when he offers no information, Fisher has the option to kill or knock him out.

The possibility of a morality system was intriguing, but those expecting the options to matter should temper their expectations. Apparently there was discussion during development about incorporating morality points or consequences for killing or leaving enemies unconscious, but Ubisoft Toronto decided against it. The team was worried that players would meta-game and chose their actions based on the consequences or point system instead of what they felt was right. As a result, the option to kill or incapacitate enemies is a purely aesthetic choice. 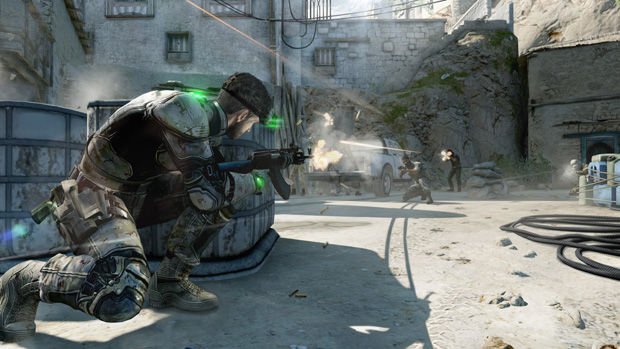 Fisher dons his classic outfit and moves through the camp, finding a group of enemies up ahead. This is the moment the player decides to show off the new “killing in motion” system. Taking cover in a tent, he marks three soldiers and dashes out, killing them in slow-motion. With a stab of the enemy in front of him, his “mark and execute” ability is recharged, allowing him to mark and shoot the two remaining enemies as he keeps running. This is something that could not be done with the old “mark and execute” system, which required Fisher to remain stationary.

Moving on, Fisher navigates some guards and springs up the side of a building, hanging on to the edge. A soldier patrols on top, and Fisher makes a sound to attract his attention so he can pull him to the ground, knocking him unconscious. The ability to draw a guard’s attention isn’t just limited to pressing a button. If you’re playing Blacklist on Xbox 360, you can use Kinect voice commands to attract enemies.

I saw the potential for abuse, and asked if Kinect would require a specific command or if a chatty roommate could set it off by accident. Though they had considered making it sensitive to any sound, perhaps for increased realism, they had wisely agreed that this would be a bad idea. Players will have to use the right command if they want to utilize Kinect. 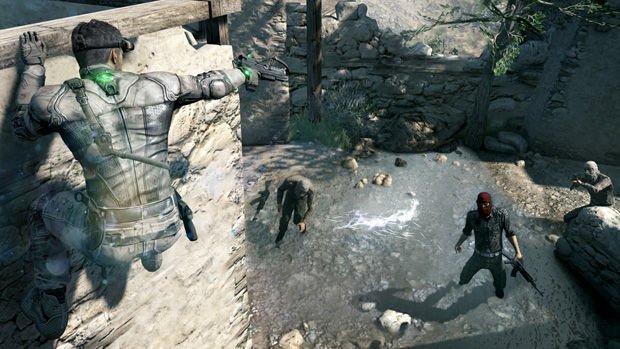 Fisher climbs up the building and waits for other soldiers to find the body, which has fallen in a puddle of water. Thinking quickly, he fires an electric bolt from his tactical crossbow, a new device that has multiple applications depending on the ammo used. Fisher moves forward but a truck with more soldiers and a turret appears. One of the perks of being the leader of the newly formed Fourth Echelon is having air support from his team. A firefight ensues, and once Fisher feels he’s in place, he calls in a missile from above to take out the turret and most of the enemy forces.

Ubisoft Toronto wanted to incorporate the idea of attacking tactically from multiple sides like in Rainbow Six, but adjusted to work for just one man, something demonstrated by Fisher approaching the room with his target. While he used brute force in the main demo, my private demo showed a much more strategical approach.

After peeking under the door to mark three enemies and identify his target, he places an explosive on the door and scales the building, ending up in front of a window on the other side of the building. Before the soldiers even know he’s there, Fisher blows the door, drawing their attention so he can smash through the window and execute all three of them. There will reportedly be many moments in the final game that allow for such creative, multi-directional attacks. 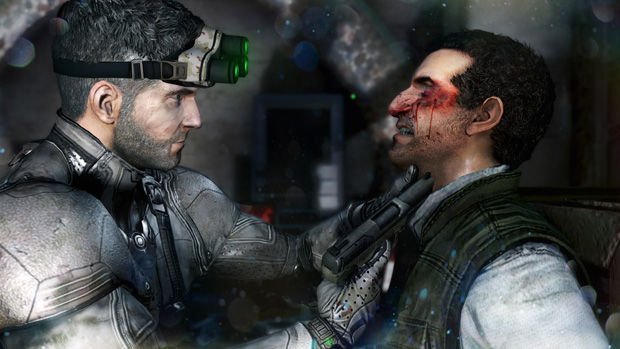 Fisher closes in on his target, who is enraged and claims to be a planted agent deep undercover for years, another deviation from the original demo. He yells at Fisher for blowing his cover and demands to speak to whoever is in charge. Fisher, being the head of the Fourth Echelon, obliges, grabbing him and getting an eye scan. The man was once an operative but joined the enemy a few years ago. Fisher demands information about the Blacklist with a gun to the man’s throat, but the man would rather die, pulling the trigger on himself.

My demo continued, with more enemy forces closing in on Fisher’s position. Fisher must rely on his team to get him out of there, as the player takes control of an attack helicopter. From a first-person viewpoint, the helicopter proceeds to eliminate every enemy outside Fisher’s door. With the coast clear, Fisher runs out, jumps, and the demo ends.

This demo may have given the impression that older fans are simply out of luck when it comes to the stealth gameplay they love, but some hints from the team imply that they shouldn’t write off the game yet. While Conviction‘s co-op multiplayer is returning, it is also being joined by the revival of Spies vs. Mercs, the classic mode from the last-gen games.

Fisher can drag bodies to hide them, and in general there will be a balance of stealth and action. Earned cash can also be shared between the single and multiplayer modes, something that is always appreciated. 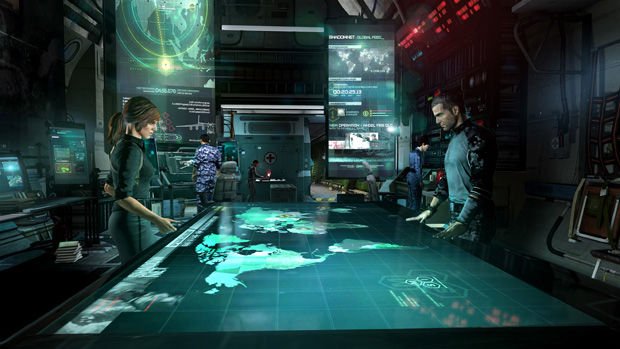 So for a guy who has never really cared about Splinter Cell, I came away impressed. Blacklist looks like it will be a satisfying experience when it releases in Spring 2013. In the meantime, it seems that I need to go back and play Conviction.